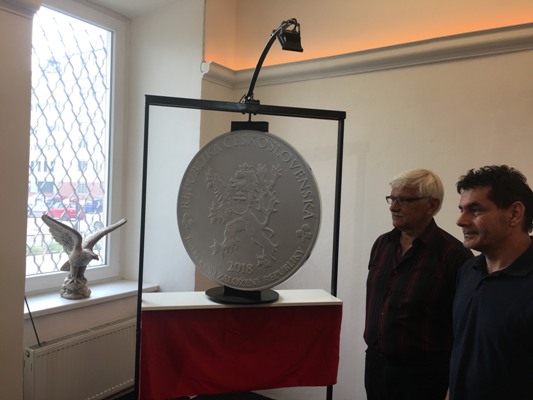 The largest coin in the world is one-ton gold Australian Red Kangaroo Coin with a diameter of 80 cm introduced by Perth Mint in 2011. In 2018, the lead will be taken by Brno’s “GSP Mincovna” [“GSP Mint”]. New #1 world coin with a diameter of 90 cm will be minted out of a half ton of silver publicly next year.

The world’s largest coin will be manufactured on the occasion of the 100th anniversary of formation of Czechoslovakia. The model was ceremoniously showed in Boby Centrum Brno yesterday. The coin model will be available to public Tuesdays, Thursdays, and Fridays in GSP Mint’s Museum House of Faberg at Bratislavská 7 in Brno.

500 kg of pure silver will turn into Masaryk Silver Coin of 900 mm in diameter. Silver was not chosen by chance. Roman Diviš, the owner of GSP Mint, mentions that this silver coin could be turned into an investment since it’s worth 2 000 000 CZK (75 660 EUR); the artistic value is however much higher. The coin features face of Tomáš Garyk Masaryk, first president of Czechoslovakia and a distinguished world-known politician, and Czech state symbols. The decision to mint the coin as such is unique “since such large coins are usually casts”, informed Diviš.

The coin will be minted publicly during an exhibition taking place at BVV Trade Fairs Brno next year and it should be quite a spectacle!

GSP Mint was established in 2017 on the foundation of GSP Refinery. GSP Mint creates coins with historical characters regardless of their political affiliation. One of the GSP’s best achievements is a coin featuring Fidel Castro in incredible detail, showing even his emotion.

https://www.brnodaily.com/2017/05/28/breaking-news/brnos-mint-will-turn-500-kg-of-silver-into-the-largest-coin-in-the-world/https://www.brnodaily.com/wp-content/uploads/2017/05/biggest-coin-in-the-world-brno.jpghttps://www.brnodaily.com/wp-content/uploads/2017/05/biggest-coin-in-the-world-brno-150x113.jpg2017-05-28T08:39:49+02:00Zuzana PápayováBusinessNews - ArchivedBreaking News,Czech Republic,Things To Do in BrnoThe largest coin in the world is one-ton gold Australian Red Kangaroo Coin with a diameter of 80 cm introduced by Perth Mint in 2011. In 2018, the lead will be taken by Brno's 'GSP Mincovna' . New #1 world coin with a diameter of 90 cm will be minted out...Zuzana PápayováZuzana Pápayovázuzanazetqapapayova@gmail.comEditorSlovak expat in Brno; a philosopher by night and rebel by fate who is too eager to understand it all, yet too understanding to loot the mysterious magic of the world.Brno Daily

Breaking News, Czech Republic, Things To Do in Brno

« Evenings under Brno’s Skies
Ways to Savor Springtime in Brno »