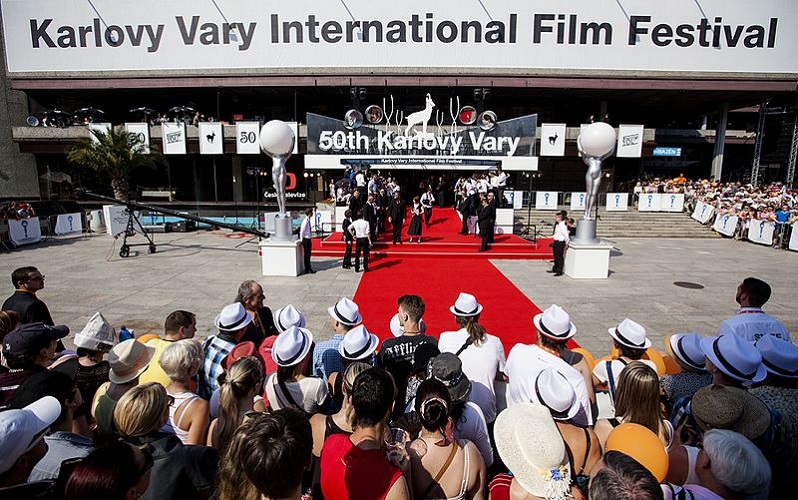 Hungry for good film experiences? Come to feast at 52nd International Film Festival in Karlovy Vary. Enjoy there the best of both worlds: film & festival!

Karlovy Vary Film Fest is the biggest film festival in Central Europe and hosts numerous A-list movies. The Economist magazine describes the fest in Karlovy Vary: “It may not be the Riviera, but this Czech city is not without charm,” and continues “A carnival atmosphere runs throughout, with attendees sunning themselves in the park between films. Sausage and beer are available at every turn (this is the Czech Republic after all), and student-types with rucksacks and rolled up sleeping mats wait in queues for tickets.”

The first ever event was held in 1947 in Karlovy Vary (Carlsbad) and in 1956 was awarded a category of an “A” festival. Despite the political pressure of Czechoslovakian communist government, the festival has endured the hardship and continued each year to this day, promoting the art of cinema. Since the beginning, the Grand Prize has been the Crystal Globe – although its form has changed many times.

Among the most important films that have been first screened in Karlovy Vary in the last decade are Christophe Barratier’s The Chorus (2004), Caroline Link’s Nowhere in Africa (2001), and one of Jean-Pierre Jeunet’s masterpieces: Amelie (2001).

Some films are screened there for the first time in presence of big movie stars. “We have had the honor of welcoming some of the biggest names in world cinematography,” write the organizers and feature a rich gallery of international celebrities attending the festival, such as Sharon Stone, Gregory Peck, Robert Redford, or Leonardo DiCaprio. Last year, Jamie Dornan took time out of his busy schedule of filming the next two episodes of Fifty Shades of Grey to attend the 51st Karlovy Vary International Film Festival.

Who is going to show up in Karlovy Vary this year? Ken Loach, Paulu Laverty, or Casey Affleck, younger brother of Ben Affleck. Casey Affleck will be honoured by the Festival President’s Award. With the screenwriter and director David Lowery, Affleck will present their latest project, a film poem “A Ghost Story”.

Want to see as many films as possible? Rent a specialized festival bicycle! You can also take a picture on the red carpet or come and check a live broadcast from Radiožurnál’s R-stream Mobile Studio. The festival pampers its visitors making this event so unique – Karlovy Vary tears down the barriers and brings together top celebrities with film enthusiasts who sleep under the tents.

Having high number of visitors, the organizers offer lots of various accommodation choices. From hostels and last minute orders to agencies and tent villages. Although, if you are planning to visit the festival, do plan your stay ahead of time.

The prices for the festival are quiet decent. The student pass for the whole festival is 900 CZK only. It is also possible to book the screening places via SMS or online.

Find the catalog of films here.

https://www.brnodaily.com/2017/06/19/culture/0630-0708-karlovy-vary-film-festival/https://www.brnodaily.com/wp-content/uploads/2017/06/Karlovy-Vary-film-Festival.jpghttps://www.brnodaily.com/wp-content/uploads/2017/06/Karlovy-Vary-film-Festival-150x94.jpg2017-06-19T06:10:43+02:00Taras_BiletskyiArt & CultureCinema,Culture,Czech Republic,Travel TipsHungry for good film experiences? Come to feast at 52nd International Film Festival in Karlovy Vary. Enjoy there the best of both worlds: film & festival! Karlovy Vary Film Fest is the biggest film festival in Central Europe and hosts numerous A-list movies. The Economist magazine describes the fest in Karlovy...Taras_BiletskyiTaras Biletskyitarasbiletskyi@gmail.comEditorLiving the irrationality one absurdity at a time.Brno Daily