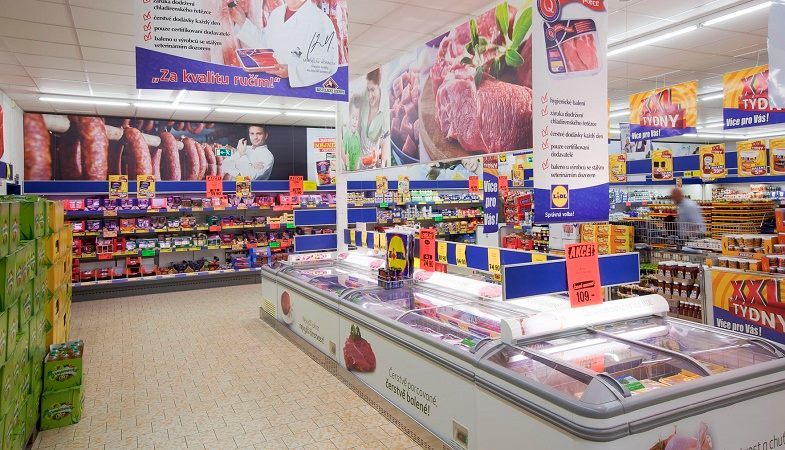 A Czech man with a huge cross protested against Greek week in Lidl supermarkets. Photo: Aljona83 (Own work) [CC BY-SA 3.0], via Wikimedia Commons

Olomouc, North Moravia, Sep 5 (CTK) – A man dressed in clerical vestments and with a large Greek cross in his hands was shopping in the local Lidl supermarket yesterday in protest against the food chain having erased the cross from Orthodox churches on the Greek island of Santorini for its campaign “Greek week.”

The supermarket director called in the police, but no intervention was eventually needed.

“She told the policemen that a man in vestments and with a cross was walking around the supermarket,” town police spokesman Petr Cunderle told journalists.

She said with his unusual appearance the man had provoked fear, bothering the customers by addressing them and blessing the goods.

“No property was harmed and the incident ended by the man’s walking out,” Cunderle said.

The man said on his Facebook profile he resented the Lidl supermarket chain having deleted the cross from Orthodox churches on its marketing leaflets.

“I think this cannot be excused,” he said.

The argument that the company wanted to observe religious and political neutrality was no excuse, he added.

“We show them that crosses simply belong to our country and culture and that we are not afraid,” he added.

Prague Archbishop Cardinal Dominik Duka denounced the withdrawal of the crosses in a letter for the ambassador of Greece on Sunday.

This is an unprecedented and immoral act, Duka said.

“So far, ‘only’ falsification of photos occurs, but there are the fears that soon real crosses may be removed even from churches,” Duka wrote.

“Our European civilisation is created by a number of roots, with Greek democracy and philosophy being one of the most important ones,” he added.

“People themselves are to think of whether to support the campaign for the Greek week by shopping there this week,” Jurecka told Czech Radio.

On Friday, Lidl said the firm certainly did not want to offend anyone.

“In this case, this was a product sold in many European markets simultaneously within the Greek week. The design of the packaging was not made in the Czech Republic, but it was created by an international team,” Czech Lidl’s spokesman Zuzana Hola said.

Lidl is part of the German Schwarz supermarket chain with shops in 27 countries.

In the Czech Republic, it scored the record profit of four billion crowns in the financial year 2015/2016.