Kaménky To Turn More Attractive and Greener – In 20 Years 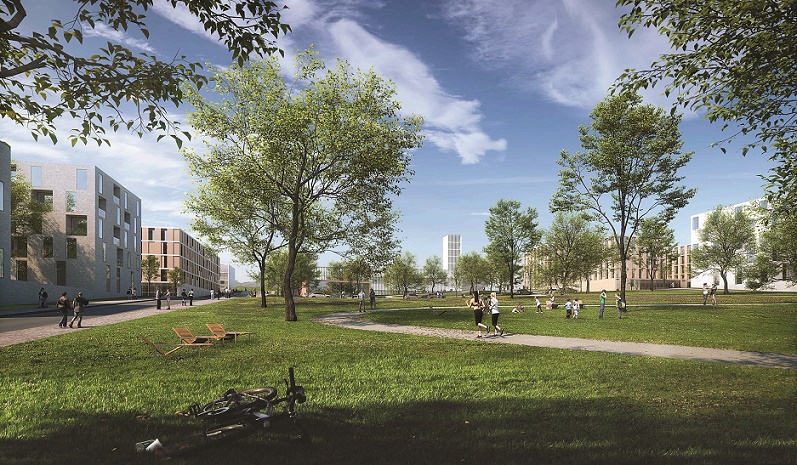 The architectural competition has finally decided the future of the Kaménky site. Photo: Visualization – Urban competition for “Na Kaménkách”, Brno.cz

Brno, Sep 8 (BD) – Attractive location Kaménky in Černovice district with a stunning view of Petrov has been an apple of contention between local citizens and a private company Imos Development since 2015. The architectural competition has finally decided the future shape of the site.  It will take at least 10 years to see the first buildings.

Citizens of Brno-Černovice have partially enforced their vision of the city district. There will not rise eight-story building blocks as the original idea by a private investor proposed. After a long dispute between Imos and locals that escalated into a lawsuit, an urban competition has conciliated all parties.

Architect office in Brno (KAM) was commissioned to handle this situation and prepare a comprehensive plan.

New design of Kaménky has to take into consideration the decision of the Regional Court to not increase the intensity of build-up, so huge building blocks for thousands people were denied.

Investor had to stop preparations for construction in the southern part of the site, as the Czech daily iDnes.cz reports.

Much greener “Kaménky” than initially proposed

City’s official portal Brno.cz informs that the winning draft by Kuba & Pilař architekti s.r.o. was the best mostly because of its thoughtfulness, consistency and feasibility.

The winning plan includes much more greenery and space than the initial idea by Imos. There will be also a large park, shopping center, community center and other social facilities smoothly combining the current buildings of Černovice with the new one.

Deputy Mayor of the City of Brno Martin Ander comments the planned construction as follows: “The competition helped to find an elaborated design of a pleasant city district that offers not only attractive living but also many public spaces, greenery and civic amenities. It connects the current and new buildings of Černovice.”

Ander also adds for the Czech daily iDnes.cz : “The preparation fuss will take at least 5 years. In addition, we need to prepare the infrastructure plan. The first block could be ready up to 10 years, the entire construction site should be open in 15 or 25 years.”

The design that has emerged from the competition provides the basis for an urban study. The study will be discussed with the public and will be subsequently form the basis for a change in the land use plan.

https://www.brnodaily.com/2017/09/08/brno-urban-guide/kamenky-to-turn-more-attractive-and-greener-in-20-years/https://www.brnodaily.com/wp-content/uploads/2017/09/170829_kamenky_1_cena.jpghttps://www.brnodaily.com/wp-content/uploads/2017/09/170829_kamenky_1_cena.jpg2017-09-08T07:38:37+02:00Zuzana PápayováBD MagazineBrno Urban GuideBrno,Brno Urban Guide,Urban PlansThe architectural competition has finally decided the future of the Kaménky site. Photo: Visualization - Urban competition for 'Na Kaménkách', Brno.cz Brno, Sep 8 (BD) - Attractive location Kaménky in Černovice district with a stunning view of Petrov has been an apple of contention between local citizens and a private company Imos...Zuzana PápayováZuzana Pápayovázuzanazetqapapayova@gmail.comEditorSlovak expat in Brno; a philosopher by night and rebel by fate who is too eager to understand it all, yet too understanding to loot the mysterious magic of the world.Brno Daily

Slovak expat in Brno; a philosopher by night and rebel by fate who is too eager to understand it all, yet too understanding to loot the mysterious magic of the world.
View all posts by Zuzana Pápayová →
« Brno’s Scientists Invent Device To Detect Methanol In Blood Within Minutes
DPMB Sells Gift Vouchers »