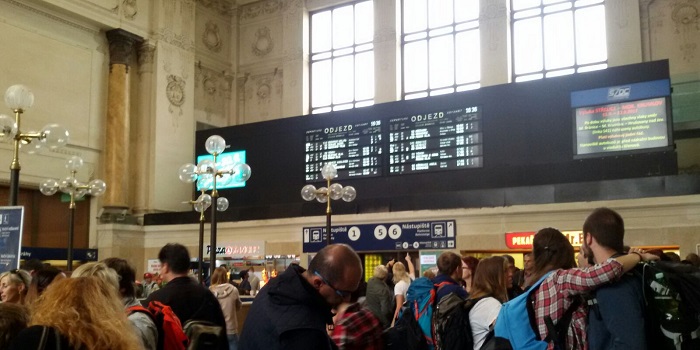 Passengers in Brno can be finally relieved. Trains at Brno Central Station are back on schedule. Photo: @BrnoDaily

Brno, Sep 18 (BD) – 170 million CZK spent and almost 300 connections daily affected – that is an overview of summer railway repairs. The fourth platform at Railway Station is refurbished and the Prague viaduct connecting Station with Židenice is capable to serve for a long time.

Thousands of passengers are back

Trains are back on their original track. Their destination is once again Brno Central Station rather than Lower Station  [Dolní Nádraží] or Židenice Station. “About 60 percent of people used Lower station and 40 percent Židenice,” Czech Railways spokeswoman Monika Bezuchová said. After September 11, ten thousand passengers are back in Brno center.

The reconstruction of Prague viaduct during summer months limited trains from Havlíčkův Brod and Česká Třebová. As SŽDC [Administration of Railways] spokesman Kateřina Šubová said to Czech TV, it was inevitable to rebuild the viaduct in order to extend its service life.

The fourth platform underwent a redo as to get into shape, the same as the second and third platform had gotten last year. It should be user-friendly with higher paving, roof and modern information system.


The city, carriers, passengers, and others involved could now get a taste of how 2018/2019 massive reconstruction will influence their traveling.

The works will start in spring 2018 and finish in December 2019. An entirely new building will emerge in the process. It however doesn’t have to do anything with the controversial and widely discussed plans for building up a new Brno Central station. The scheduled works have only a maintenance character.

Communication and security facilities as well as bridges over the Hybešova and Křídlovická streets will be under reconstruction to ensure its longevity.

Toilets and fast food stands that were non existent this summer at Lower Station should be ready for passengers when the next reconstruction starts.

For six months in 2018, trains from Třebíč and Moravské Bránice will serve only Lower Station.

“Together with SŽDC, we are already working on special measures to ensure that both regional and long-distance transportation will be affected as little as possible,” Bezuchová from the Czech railways promised for Czech TV.

https://www.brnodaily.com/2017/09/18/breaking-news/finally-fit-for-service-brno-central-railway-station/https://www.brnodaily.com/wp-content/uploads/2017/09/Finally-Fit-For-Service-Brno-Central-Railway-Station.jpghttps://www.brnodaily.com/wp-content/uploads/2017/09/Finally-Fit-For-Service-Brno-Central-Railway-Station-150x75.jpg2017-09-18T08:00:43+02:00Zuzana PápayováBusinessNews - ArchivedPoliticsRelocation to BrnoTransportTravelBreaking News,Brno,Brno Urban Guide,Transport,Travel Tips,Urban PlansPassengers in Brno can be finally relieved. Trains at Brno Central Station are back on schedule. Photo: @BrnoDailyBrno, Sep 18 (BD) - 170 million CZK spent and almost 300 connections daily affected - that is an overview of summer railway repairs. The fourth platform at Railway Station is refurbished...Zuzana PápayováZuzana Pápayovázuzanazetqapapayova@gmail.comEditorSlovak expat in Brno; a philosopher by night and rebel by fate who is too eager to understand it all, yet too understanding to loot the mysterious magic of the world.Brno Daily