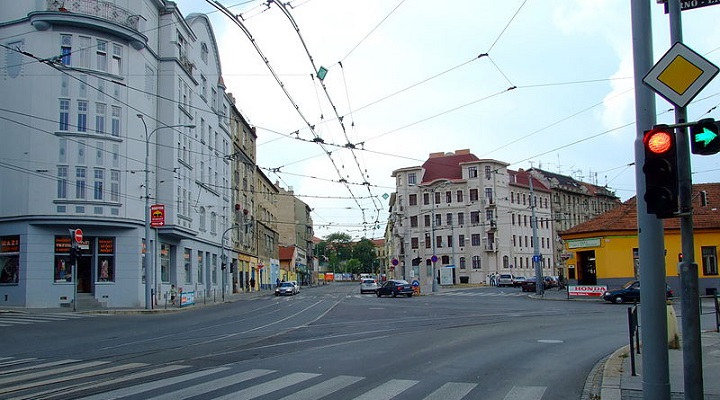 The forced eviction of socially underprivileged families living on the Cejl street has been a great issue for the city of Brno since last year. Photo: I. Kirk via Wikimedia Commons

About an year ago, one hundred families living in houses owned by a private company on Bratislavská, Vlhká and Francouzská streets were informed that their rent leases will not be renewed. In response, the desperate tenants and citizens’ initiative “Chceme bydlet!” organized a street demonstration.

After intense negotiations between the firm and Brno Municipality, the company agreed on giving the tenants a period of half a year to find new accommodation.

The project was successful and now three out of five houses are empty. Now the families in other two houses need to move out by the end of September, Jana Ustohalová from iDnes.cz writes.

The properties at Vlhká 9 were bought by Spilberk SPV alfa company in the meantime. “Lease contracts can no longer be extended because the houses are in a state of emergency and require a general reconstruction that can not be done when there tenants living there,” a lawyer Robert Sedláček said, Ustohalová reports.

Sedláček is the managing director and founder of the trust that owns Spilberk SPV alfa.

He added that the owner is trying to mitigate the impact of the situation on tenants and help them to find new accommodation.

Most of families eventually managed to get new housing, either in commercial properties or offered by the municipality.

As this kind of incident will get more frequent in Brno, the municipality is preparing emergency housing on Francouzská and Železniční streets.

“Similar situations of massive evictions of tenants in a socially excluded area at the city center will be more frequent than before. We already know about the next ten families directly from Cejl, which the owner did not extend the lease to,” Brno Deputy for Social Politics, Martin Freund, explained.

Α massive expulsion of families in Brno took place earlier this year, in March 2017. The owner of the hostel on Markéta Kuncova street in Židenice cancelled the lease contracts. Two hundred people, including small children, were left without electricity and water. The tenants of the hostel filed a lawsuit that the police have been investigating.

There have been an ongoing discussion and various attempts of the city and individuals to improve the image and safety of the Cejl street and the entire neighborhood.

The area nicknamed “Brno’s ghetto” or “Brno’s Bronx” is known as a place of drug smuggling. For the poor reputation of the neighborhood, the house rents are relatively cheaper. So far, housing there has been an option for people in difficult financial situation.

The Brno-based artist Kateřina Šedá and her team put together a guide to the “Brno’s Bronx” neighborhood called Brno střet (Brno Clash). Šedá with her team were working with locals and created an unconventional guide through which they want to acquaint the general public with the place and its community.

She and her colleagues criticize the life of Romani residents there. The artist believes the Romani community in the district is not uniform and the spirit of the place is unique.

Facebook Comments
https://www.brnodaily.com/2017/09/30/breaking-news/forced-eviction-on-cejl/https://www.brnodaily.com/wp-content/uploads/2017/09/The-Forced-Immigration-From-Cejl-Street-wikimedia.jpghttps://www.brnodaily.com/wp-content/uploads/2017/09/The-Forced-Immigration-From-Cejl-Street-wikimedia-150x83.jpg2017-09-30T12:31:06+02:00Michaela PaNews - ArchivedPoliticsAccommodation,Breaking News,Brno,Brno Urban Guide,Politics,SecurityThe forced eviction of socially underprivileged families living on the Cejl street has been a great issue for the city of Brno since last year. Photo: I. Kirk via Wikimedia Commons About an year ago, one hundred families living in houses owned by a private company on Bratislavská, Vlhká and...Michaela PaMichaela Pastourmatzimichaela.pastourmatzi@gmail.comEditorHi! My name is Michaela, I'm from Greece and I'm currently living in Brno.Brno Daily

Hi! My name is Michaela, I'm from Greece and I'm currently living in Brno.
View all posts by Michaela Pa →
« 10/01 – 10/08 Coffee Week in Brno
Rental fraud scheme revealed in Brno »