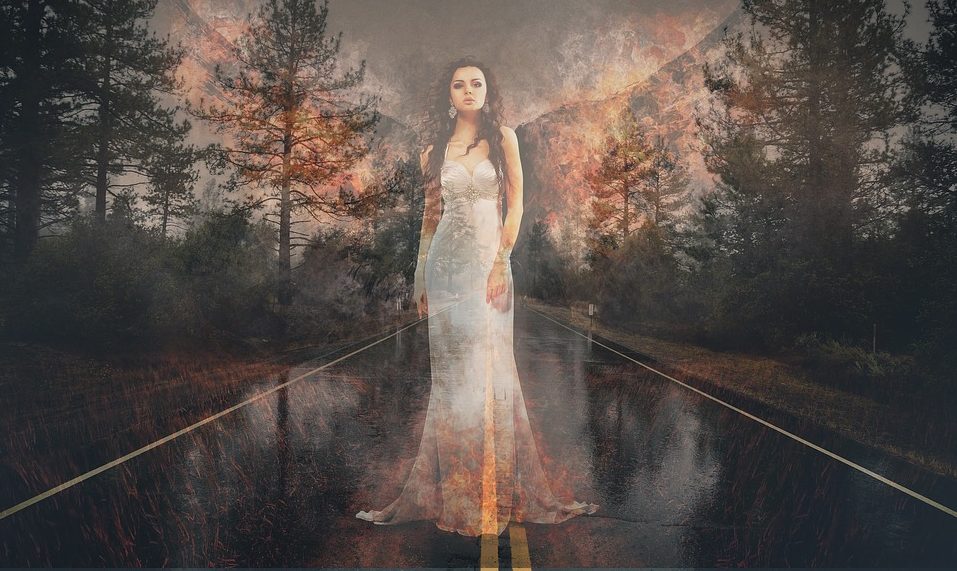 A wedding ended in a massacre, and the bride now haunts the motorists

The tale of an unhappy female ghost causing havoc for motorists on the highway is almost universal. There is one in the Czech Republic, but she is not the victim of a recent car crash like so many of the others. She was the bride at a 16th century wedding that ended in a massacre. The place has been called Nine Crosses (Devět křížů) for as long as anyone can remember, and tall wooden crosses still stand by the side of the turnoff where the nine victims were buried. The site is a protected cultural monument.

The spot is just off the D1 highway from Prague to Brno, the busiest road in the country. For years, tabloids have been pointing out that the fatal accident rate near exit 168 by the village of Lesní Hluboké, about 25 kilometers west of Brno, South Moravia, is higher than average. And perhaps the bride’s ghost is to blame.

The area just under an overpass for Exit 168 is where the white-shrouded ghost is supposed to appear, frightening motorists into losing control of their cars. An old trade route for horse-drawn carts stood at the site long before Exit 168 was opened in 1973.

The curse has been in place for almost five centuries, according to supporters of the tale. A wedding was planned in 1540 at the village of Lesní Hluboké, which means the Forest Deep. The town had existed since at least 1395, and likely is much older.

The story starts a year earlier, in 1539. A peasant from Lesní Hluboké was returning from the market in the big town of Velká Bíteš, when he saw a wounded Hungarian horse merchant on the road. The peasant brought the merchant home, and healed his wounds.

The peasant had a very beautiful daughter who helped to look after the wounded merchant. The two, being young, fell in love with each other. The girl’s father though, had different ideas. He wanted to marry his daughter to a wealthy person so the family could improve its standing. This was a time when marriages were often still arranged.

The father sent the merchant to Hungary to do some business deals, and if he returned wealthy after a year then he would consent to the wedding. This was just meant to get rid of the merchant. The father hoped he would have another accident and never return. Or fall in love at home like people are supposed to.

Another version says that the merchant left on his own, having agreed with the daughter about a secret wedding on his return.

But the tale soon takes a dark turn. The son of a rich local family became interested in the beautiful young woman, just as the father had originally hoped. The parents on both sides were in favor of the marriage, and the daughter was left out of the discussions.

The girl’s father set aside any thought of the promise to the Hungarian merchant and forced his daughter into the arranged marriage.

Somehow word got to the merchant. Either the daughter managed to send a message or some other merchant from Domašov sent word out as part of a code of merchant courtesy. Perhaps he simply returned because the year was up.

The Hungarian merchant was not happy at being jilted, and he wasted no time in planning his revenge.

At a local inn he talked a friend, perhaps the local gamekeeper, into helping him punish the wedding party, but the bride was to be spared. They would ambush from secret, and not be seen.

Perhaps he thought he could emerge as the hero, pretend to fight off the assailants and rescue his widowed loved one. Maybe he thought he would console the grieving widow and marry her after a brief mourning. Whatever his plan was, it went astray.

The happy wedding procession was returning from the church in Velké Bíteš to the village of Lesní Hluboké, without a clue that the merchant had returned and was laying in wait.

At the crossroads in front of the village, the merchant and the gamekeeper opened fire. There were seven killed on the scene. The dead included the bride and bridegroom, the bride’s father, the witness, and three other women, including bridesmaids. Guns were not very accurate then, and it was easy to hit the wrong target.

When the merchant saw that his beloved was among the dead, he turned his anger against the gamekeeper, blaming him for the stray bullet. He shot the gamekeeper in anger, and either the gamekeeper lived long enough to shoot back or he took his own life, knowing there was no way out.

The nine dead were buried at the spot. Crosses were put up by the Benedictine monks from the nearby monastery in Rajhrad, and for a long time they were reconsecrated every 100 years to pacify the souls of the nine dead. The last reconsecration was Sept. 18, 1887, meaning that since 1987 the souls have not been appeased. The wooden crosses have been replaced several times.

Tabloid newspaper accounts say the bride, dressed in white, now appears standing in the middle of the D1 highway by the exit 168 overpass, causing drivers to swerve. Other accounts talk of a pair of black wings that swoop down on windshields, causing the driver to panic. One writer for a mainstream newspaper even talks of the Domašov Triangle, an area that includes Nine Crosses, which has several unexplained road accidents.

The white bride appears most often to those who are planning to get married or driving to or from a wedding. One accident involved a couple on their way from Brno to Prague to catch a flight for their Caribbean honeymoon. The injured driver, who swerved without reason, is supposed to have told his new wife. “I saw her … she was there … the bride.”

The Nine Crosses are a registered cultural monument, though the National Monument Office (NPÚ) gives the rather vague account that the wedding party was killed by impoverished rogue soldiers returning from a war in Turkey.

The highway is also being improved with more modern surfacing and safety features, though the area at Nine Crosses is still one of the bumpiest according to a recent survey of the entire road.

The Czech Republic as a whole has a high accident rate, some 15.7 deaths per billion vehicle kilometers, which is the highest in Europe and second only to South Korea out of 22 countries listed by International Road Traffic and Accident Database (IRTAD) in 2015. The country also had 6.2 deaths per 100,000 people, ranking it 23rd out of 32 countries surveyed by IRTAD.

The article was originally published at Magicbohemia.com.