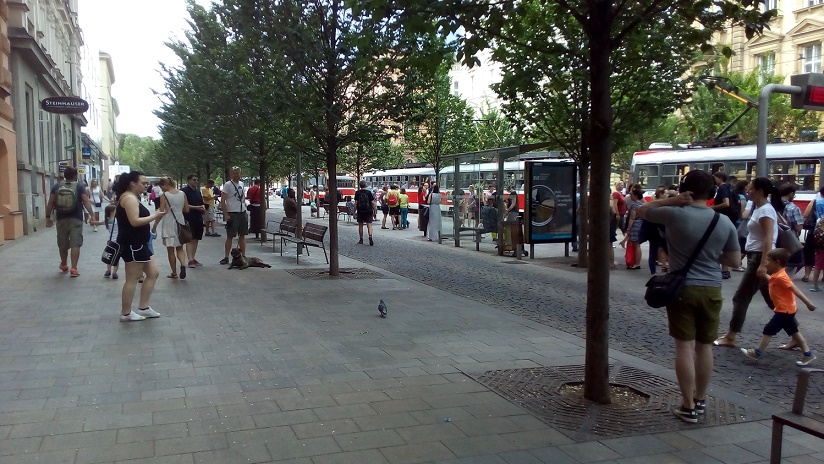 Czechs do not understand Slovak as well as the older generations. Photo: @BrnoDaily

Prague, Nov 5 (CTK) – A quarter of a century after the split of the Czechoslovak federation, young Czechs understand Slovak less than young Slovaks understand Czech, Marian Sloboda, head of the department of Slovak language and culture at Charles University’s Faculty of Arts, has told CTK.

Slovaks generally more or less understand Czech, while a part of the young Czechs do not understand Slovak as well as the older generations, Sloboda said.

He said Slovak texts were read at Czech secondary or even elementary schools and the Slovak language was heard on television in the past.

Understanding Slovak was common among Czechs in former Czechoslovakia which was divided in two countries in January 1993, but now it largely depends on individual people themselves, Sloboda said.

A part of Czechs come across the Slovak language for the first time on the Internet or at university as a number of Slovaks study in the Czech Republic, he said.

Slovaks living in the country find out that Czechs do not understand some words that are different in the two languages and they thus continue speaking Slovak but incorporate the Czech equivalents of these words into their speech, he said.

However, many young people have relatives and friends in Slovakia. People from Moravia, the eastern part of the Czech Republic bordering Slovakia, understand Slovak more easily.

The Slovak and Czech languages continue to be very similar, which seems to be why the interest in learning the other language is low in both countries.

Sloboda said rather few people want to study Slovak at Charles University. Some of the students are Slovaks who choose a combination with another subject that is not available in Slovakia, for example Slovak together with Swedish, he added.

He said more people attend an optional course of Slovak language. “People have various motivations, sometimes strictly personal or they like Slovak rap music,” he said.

Sloboda said the interest in the Slovak courses is lower than in Hungarian or Polish courses.

Young Slovaks are in contact with Czech language less often because TV programs for children under 12 must be dubbed into Slovak.

He said this had its roots in history. “Slovaks have been living with Czech since the 13th or 14th century,” he said.

https://www.brnodaily.com/2017/11/05/breaking-news/young-czechs-understand-slovak-language-less-than-older-people/https://www.brnodaily.com/wp-content/uploads/2017/08/Jostova-street-in-Brno.jpghttps://www.brnodaily.com/wp-content/uploads/2017/08/Jostova-street-in-Brno-150x84.jpg2017-11-04T18:16:07+01:00PTVTeamNews - ArchivedPoliticsBreaking News,Czech Republic,Education,Expats CzechiaCzechs do not understand Slovak as well as the older generations. Photo: @BrnoDailyPrague, Nov 5 (CTK) - A quarter of a century after the split of the Czechoslovak federation, young Czechs understand Slovak less than young Slovaks understand Czech, Marian Sloboda, head of the department of Slovak language and...PTVTeamPTV Teaminfo@ptvmedia.czUm_memberBrno Daily