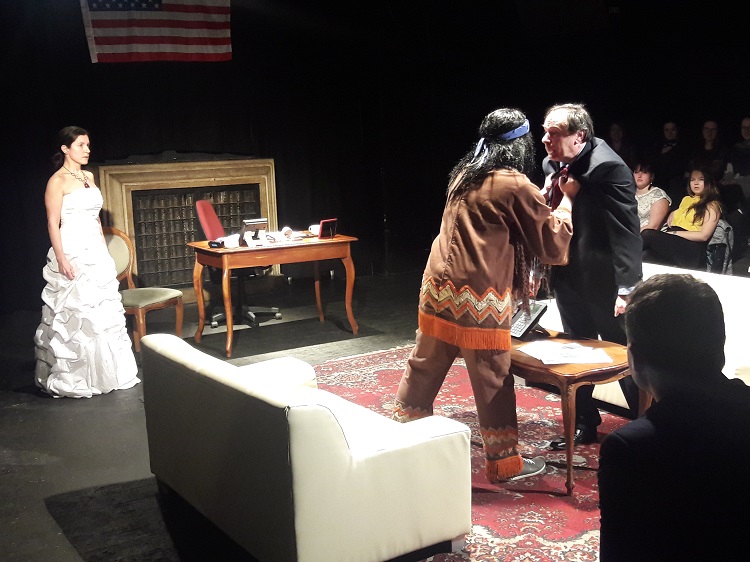 The story revolves around the seedy efforts of embattled president Charles Smith to raise the campaign funds needed to put him back in contention in the current presidential race.

The president hits on the idea that the Association of Turkey Manufacturers might be squeezed for the funds that he requires and, with the help of his spin doctor of a speechwriter, devises a plan to coerce the association’s representative into forking the funds over. His devious plan gets complicated, however, by his speechwriter’s demand that she and her same-sex partner be married on TV by the president himself.

The lead role of Charles Smith is played by Chicago native Jeff Smith, who also teaches in Masaryk University’s Department of English and American Studies and serves as Artistic Director of the Gypsywood Players in Brno. Central to the action of the entire play, Smith gives a commanding performance – as presidential as the actor Smith’s voice is, the opposite is true of his character’s behaviour. President Smith can only be described as crass, cynical, culturally insensitive and unscrupulous. The pure shallowness of his character is a thing of comic genius in itself.

President Smith’s Chief of Staff Archer Brown is played by Městské divadlo Brno’s Robin Schenk, who is convincing as Smith’s no-nonsense crony, reminiscent of a typical heartless Wall Street executive. Schenk regularly conjures up laughter in the audience with his wry dismissals of his president’s whining and complaining, not mention the way he condescendingly refers to him as “Chuck”.

President Smith’s lovesick speechwriter Clarice Bernstein is played by another Městské divadlo Brno (Brno City Theatre) professional in Dana Puková. Bernstein seems possessed by the higher ideals of both romantic and motherly love when we encounter her, but she also shows the ability to do what President Smith cites as the only thing he likes about her – be ruthlessly dishonest for personal gain.

The hapless representative of the Association of Turkey Manufacturers is played by long-time Brno resident Aaron Collier, originally from the Boston area, whose constant fretting over the well-being of his poultry in the adjacent room is a regular source of laughter for the audience.

The play also includes a hilarious cameo by another City Theatre Brno professional in Ondřej Halámek, who plays an offended First Nations chief who has also been victimised by the corrupt president.

Despite being opening night for BEST Divadlo’s rendition of November, these five wonderful performers worked off of each other with impeccable timing, thanks in large part to the efforts of three other individuals seated inconspicuously on the sidelines – Production Stage Manager Fabian Chafir, Sound and Light Technician Honza Čapek, and director Gene Terruso, who was highlighted in a previous Brno Daily article.

The play is staged in the intimate surroundings of Kabinet múz, with two rows of seating enclosing the stage on three sides, allowing the audience to sit within arm’s reach of the action.

For those of you who missed out on opening night, there will be four more opportunities to take in this comedic gem. As can be seen on BEST Divadlo’s Facebook events page, the play will run again on March 24 and 25 as well as April 3 and 8.

Reservations for tickets (250Kč each, corporate group discounts possible) can be made by emailing your name and the number of tickets you require to bestdivadlo@gmail.com, and then collecting them at the venue at least 15 minutes prior to the 7pm curtain time.

« Brno Police: Spring cleaning of used syringes in streets
In pictures: Week of protests in Brno »