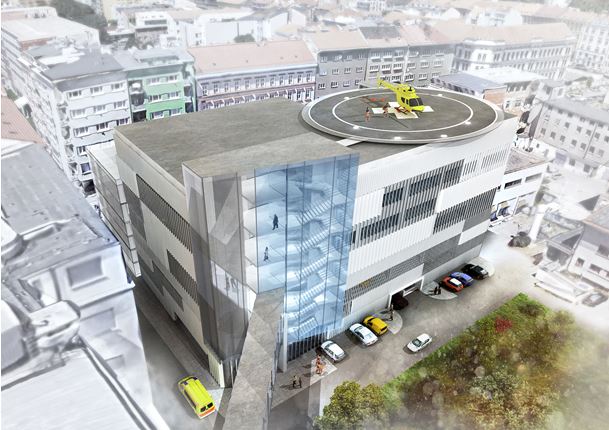 The city would like to significantly modernize the operation and provision of health care at Úrazová nemocnice [Trauma Hospital of Brno] on Ponávka Street. Visualisation: LT PROJEKT a.s.,  MMB.

Brno, March 21 (BD) – Brno City Council has agreed to prepare an investment plan to build a new pavilion at the hospital on the site of the current parking lot.

The new pavilion will be home to new surgery rooms, central sterilization, a heliport, and a parking lot, spokesperson of the City of Brno Filip Poňuchálek wrote yesterday.

“In the new pavilion of Úrazová nemocnice, there will be surgery rooms for the Departments of Anesthesiology and Resuscitation and the Intensive Care Unit, ICU. This will free up the premises at Ponávka 4 and 6, where the operating rooms are currently located,” said First Deputy Mayor Petr Hladík in the official statement published on the City of Brno’s website.

The new building will have 8 floors. On the 5th to 7th floors, seven surgical rooms will be built. 26 beds for these departments will be available there.

On the top floor, hospitals will have central sterilization and technical facilities. “The new building will have four floors of parking with a capacity of 160 parking spaces to make up for the closed ground parking,” explained Hladík.

An architectural survey is currently being done, following which all necessary permits will be obtained and a contractor selected. Construction of the new pavilion could start at the earliest in 2020. 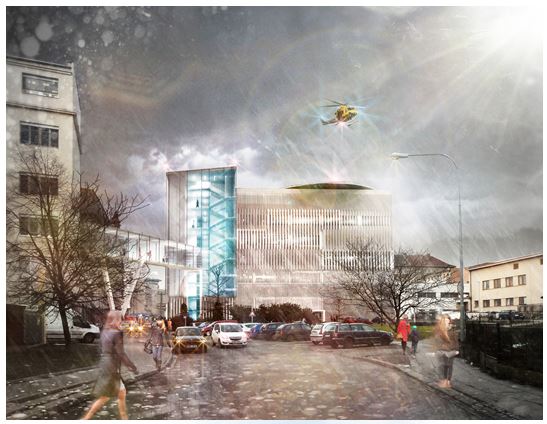 The estimated total investment costs for the construction of the new pavilion and its equipment are around CZK 463 million, excluding VAT, Poňuchálek specified.

Since January 1, 2009, The Trauma Hospital in Brno has been run by the City of Brno. The main purpose and goal of the institute is treatment, preventive care, and scientific research in the field of trauma and emergency surgery.

Between 1931 and 1933, the then modern five-storey hospital was designed by Prof.Ing.arch. Vladimír Fischer. During the bombings in 1944 and 1945, the hospital was damaged. A new rehabilitation building was opened on the site of a bombed neighboring house in November 1950. In 1954, the Research Institute of Traumatology was established there.