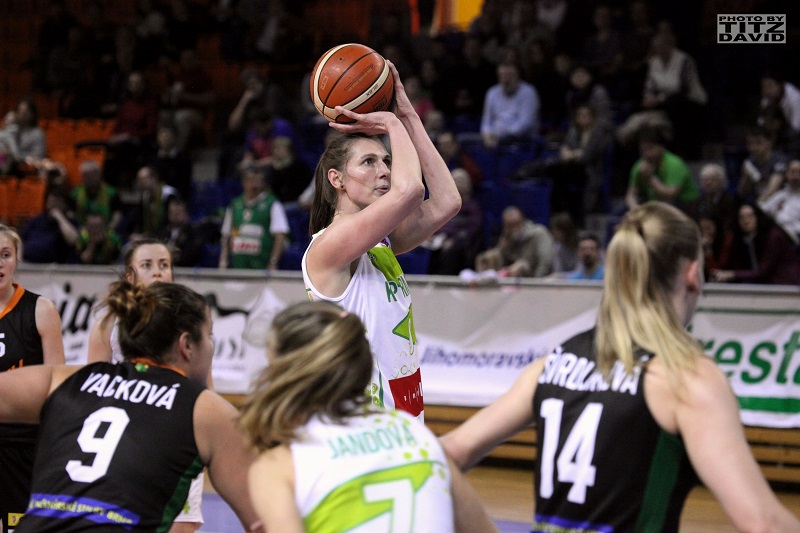 The ZBL finished its regular season with a big rivalry game between KP Brno and Žabiny Brno, but the two Brno teams will meet each other up to five more times in the next two weeks in the first round of the women’s basketball playoffs.

First, the regular season ended with KP Brno continuing its recent dominance with a 68-57 victory.

Second, the two teams will play in the best-of-five quarterfinals, starting tonight (Wednesday) at 5:30 p.m. at Hala Vodova. Game 2 is in Žabovřesky at 5 p.m. and Game 3 is back in Kralove Pole on Tuesday. If necessary, Game 4 would be March 29 and Game 5 would be March 31.

If you’re looking for something to do on a cold early-spring weeknight, you could do a lot worse than a rivalry game between two top women’s basketball teams. The teams have met each other often throughout the season and the years. Last year, KP Brno swept Žabiny Brno in the quarterfinals and eventually finished third. Earlier this month, KP Brno beat Žabiny Brno in the semifinals of the Final Four and went on to win the Czech Cup for the first time in club history. KP Brno won both regular-season matchups this year.

Technic Brno won the first two games of the season and then dropped 20 in a row. They will look to salvage their season in the Play Out Bracket with home and away games against BK Lokomotiva Trutnov (6-16) and the two teams it beat during that early-season run of success: U19 Chance (4 -18) and SBŠ Ostrava (3-19).

First up is U19 Chance. They come to Brno tonight (Wednesday) at 7 p.m. There are roughly two games in each of the next three weeks.

Kometa Fans Ask: Can We Win It All Again?

Hockey fans in Brno celebrated a long-sought-after championship last year and, now, after a four-game sweep of HC Vítkovice Ridera, the faithful are wondering if lightning will strike twice.

Kometa won their 12th title last year and seem to be following the same script during this season: start the season strong, lose intensity during the cold winter months, then get hot in the playoffs.

The next opponent is to be determined. Game 1 of the semifinal series will be either March 29 or 31.

The closest game of this season’s quarterfinal series was the first, when Vítkovice scored with 14 seconds left in regulation to send the game into extra time and Kometa was forced to play 11 extra minutes before logging the 3-2 away win. Game 2 was another 3-2 Kometa win, although without the extra time. At DRFG arena, Brno won Saturday, 4-0, and Sunday, 3-1.

Last year, Kometa was nearly perfect: they swept Sparta in the quarterfinals; they beat Mountfield HK four games to two in the semifinals; and they swept Liberec in the finals. It was a magical month that got better with every exciting game and ended with Kometa’s first title since 1966.

With their four wins this year, Brno is an astounding 16-2 in their past 18 postseason games.

Zbrojovka Loses at Liberec, Karviná next on March 31

In the swirling snow and the sub-zero temperatures of a Friday night game, Zbrojovka was unable to get its offense in sync and lost to Liberec, 2-0.

HET Liga play takes a short break. It resumes with an important home game against Karviná on Saturday, March 31 at 5 p.m. Karviná is in ninth place, with just one more win and four more points that Brno, showing just how bunched up the bottom half of the league standings are and how valuable a single victory could prove to be in the fight to stay out of the relegation zone.

Slavia Praha comes to Brno on April 7. Slavia is currently second in the league standings.

On April 14, Zbrojovka travels to Slovácko for a traditional rivalry game that could have important considerations for the future of each team.

Mladen Primorac scored a season-high 30 points to lead mmcité+ Brno over SLUNETA Ústí nad Labem, 78-67, last Wednesday, but a more evenly spread offense was not enough on Saturday as Brno lost 71-82 to BC GEOSAN Kolín.

Primorac, a Croatian center, stands 210 cm tall and weighs 110 kg. Against Ústí nad Labem, he was

Against Kolín, four Brno players scored in the low teens behind the team-high 14 points of Aleksandar Radulović. The problem was an old hindrance: the team started poorly and failed to make up the difference.

Lokomotiva Brno Horni Herspice lost to league-leading SK Slavia Praha, 10-0, in a Wednesday matinee, then hit the road for a scoreless tie at fourth-place FC Viktoria Plzeň on Saturday.

Lokomotiva Brno H. H. has one game left in the season and it will be a big one. They play at FC Hradec Králové on Satrurday, April 14. Last-place Hradec Králové is 2-1-9 with seven points. The game will likely play a big role in deciding which team will be relegated to a lower league.

Despite being shut out in both games this spring, the Brno offense has scored 14 goals this season, more than all but the top three teams in the league.

Czech Republic, Sport, Things To Do in Brno