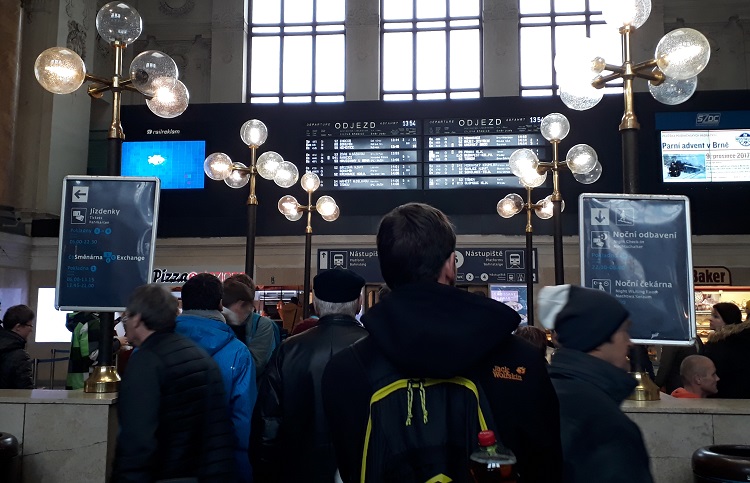 The special committee set up by the Ministry of Transport recommended the relocation of the main railway station closer to the river while refusing to finance the underground railway line, the so-called ‘north-south track diameter’ (or SJDK), exclusively from the State Fund for Transport Infrastructure (SFDI). Photo: @BrnoDaily

Brno, Mar 27 (BD) – All major institutions involved in decision-making regarding the location of Brno Main Railway Station have agreed on the “by the river” alternative.

The special committee of representatives of the City of Brno, the South Moravian Region, the Ministry of Transport, the Railway Infrastructure Administration, Czech Railways and the State Fund for Transport Infrastructure met yesterday. The financing of the so-called ‘north-south track diameter’, however, has not been established yet.

“Regarding the effort to minimize the time and material risks of realization and the effort to minimize constraints for passengers at the time of construction, it is recommended that the ‘Ac’ option be implemented under the condition that the adoption of this option does not create an automatic commitment of the state to exclusive financing of the implementation of SJDK by SFDI,” the official decision of the committee reads.

“This means that within the framework of the implementation of the project of the railway, there will be a change in the preparation of the north-south rail diameter project,” said Martin Maleček, Deputy for Regional Planning, in the official press release.

“A feasibility study will be prepared for its [the diameter’s] route; it will be a joint investment of the state, the South Moravian Region and the City of Brno,” Maleček further explained.

The resolution adopted by Brno’s municipal government (Zastupitelstvo města Brna) recommends the construction of a new station which will include the underground transport connection.

The special Committee on Brno Railway Junction (Řídicí výbor železničního uzlu Brno) was established by government decree in 2015. The latest resolution of the committee will be sent to the Ministry of Transport to evaluate this investment. The last say will rest with the Czech government.

“Together with the Governor, we will also invite the Minister of Transport, Dan Ťok, as soon as possible, to explain in detail what we are doing now as a city and region and how we will continue to invest in the necessary infrastructure,” Mayor of Brno Petr Vokřál said, according to the official press release.

https://www.brnodaily.com/2018/03/27/breaking-news/special-railway-junction-committee-yes-to-railway-station-by-the-river-underground-line-financing-unclear/https://www.brnodaily.com/wp-content/uploads/2018/01/A-new-poll-in-Brno-to-find-out-where-the-citizens-want-the-central-station.jpghttps://www.brnodaily.com/wp-content/uploads/2018/01/A-new-poll-in-Brno-to-find-out-where-the-citizens-want-the-central-station-150x97.jpg2018-03-27T07:14:58+02:00BD StaffBusinessNews - ArchivedPoliticsTransportBreaking News,Brno,Business,Politics,Things To Do in Brno,Transport,Urban PlansThe special committee set up by the Ministry of Transport recommended the relocation of the main railway station closer to the river while refusing to finance the underground railway line, the so-called ‘north-south track diameter’ (or SJDK), exclusively from the State Fund for Transport Infrastructure (SFDI). Photo: @BrnoDailyBrno, Mar...BD StaffBD Staff team@brnodaily.czAdministratorBrno Daily - English News and Events in Brno.Brno Daily