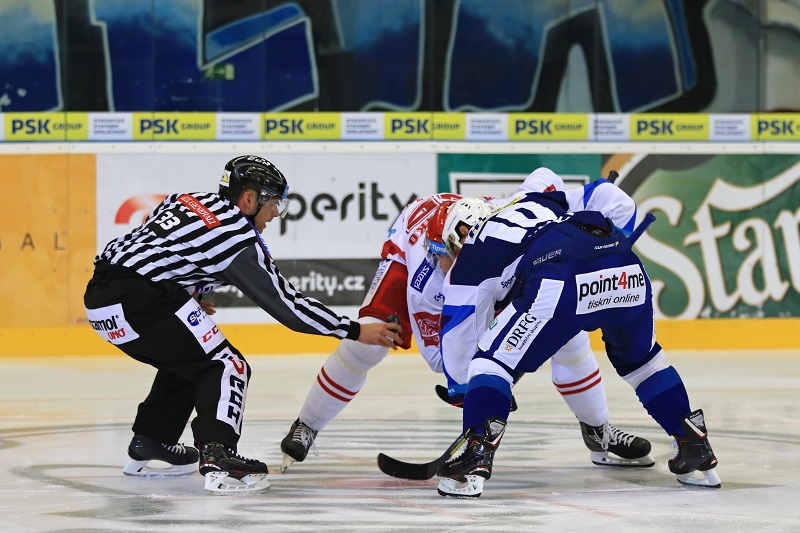 Kometa and Třinec Tied at 1-1

Brno will be the center of the Czech sports world today and tomorrow as HC Kometa hosts Oceláři Třinec for Game 3 and 4 of the Tipsport extraliga Finals.

Game 3 starts at 5:20 p.m. today (Wednesday). Game 4 tomorrow starts at 5 p.m. Expect blue and white throughout the city, especially around DRFG Arena and the public big screen in Zeleny trh.

Kometa, the defending champions, swept HC Vítkovice Ridera in the quarterfinals and beat Plzeň four games to one in the semifinals. The team is now 9-2 in 11 postseason games.

Last year, Brno went 12-2 in the postseason and won its 12th title.

KP Brno to the Finals!

KP Brno pulled away for a healthy 73-64 victory against DSK Basketball Nymburk on Saturday afternoon to earn the right to face undefeated powerhouse VVZ USK Praha in the Finals of the top women’s basketball league.

“Now we have a celebration,” said KP Brno head coach David Zdeněk. “This experience will definitely give us the strength to make our team as strong as possible in the finals with USK.”

VVZ USK Praha was 22-0 in the regular season. They swept BA K. Vary in the quarterfinals and Sokol Nilfisk H. Králové in the semifinals.

Though USK Praha is clearly the favorite, KP Brno, which won the Czech Cup this year, is 17-2 in its last 19 games.

In the semifinals, KP Brno and DSK Basketball Nymburk split the first two games, each winning road games. In Game 3, KP Brno calmly maintained a four-point lead through the final half minute of the game, with two free throws from Sonia Ursu, two free throws from Edita Šujanová and, with the three seconds left, two free throws by Eva Kopecká. Overall Brno was 22 of 24 from the free throw line. Nymburk was 18 of 23. Brno won 84-87. Šujanová led the team with 21 points. Ursu had 16 and Kopecká finished with 18.

“Joy is mixed with fatigue,” said Šujanová, who had 18 points in the deciding Game 4. “Our commitment and fight was important. We have nothing to lose from USK.”

When league-leading Viktoria Plzeň comes to Brno this Saturday for a night game, FC Zbrojovka Brno will field a team that is at the bottom of the HET Liga standings, that has scored only two goals in eight games and that just suffered a humiliating 1-0 loss to Moravian rival 1.FC Slovácko last weekend.

It will be a difficult task to stave off relegation in the final six games of the season.

In Uherske Hradiste last Saturday, a lazy clearance pass was intercepted and turned into the only goal Slovácko would require. Zbrojovka was left with only 20 points through 24 games. FC Banik Ostrava beat Bohemians Praha 1905, 2-0, and moved to 22 points, leaving Brno last.

Zbrojovka has not scored a goal in 490 minutes of play.

In the second half, both Martin Juhar and Michael Skoda had clear shots on goal: Juhar by foot and Skoda by head. Both shots went right by about a meter.

“This is being repeated over and over again,” said Zbrojovka head coach Roman Pivarník. “Experienced players fail in finishing and miss the goal.”

After the game, the team stood in front of the visiting section and allowed their fans to rain insults upon them for about 20 minutes. When crowd-control police briefly interrupted the impromptu public venting, beer rained down upon everyone. Calls for the team to removing their uniforms in disgrace eventually died down and changed to more positive Zbrojovka chants.

There are still six games left in the season and the bottom of the standings are still bunched up. Zbrojovka is within six points of the next seven teams in the standings. After Plzen, Brno travels to Dukla Praha (26 points) for a Friday evening game on April 27 (game time 6 p.m.); host Jablonec (41) on May 5; and travel to Teplice (32) on May 12.

The final two weekends will likely seal their fate: Zbrojovka hosts 14th-place Jihlava (24) on May 19 and finish the season at 15th-place Baník Ostrava (22) on May 26.

The game against Viktoria Plzeň begins at 8:15 p.m. on Saturday.

mmcité+ Brno started the Play Out bracket of the Kooperativa NBL with victories at NH Ostrava, 97-101, on Wednesday and at home against USK Praha, 86-82, on Saturday.

They play each of the three teams one more time in the Play Out bracket. The last-place team will be forced to defend its right to play next season in the top league against the top two teams of the lower league.

Against Ostrava, Canyon Barry scored 31, Dorde Lelić had 23 and Kentwan Smith added 11. Kevin Mays, who missed the entire Group A2 phase, returned to the team and scored 8. It was the second highest scoring game of the season; Brno beat Fio banka J. Hradec 108-93 on Oct. 11 in the third game of the season to move to 2-1.

At home against Praha, Brno started strong, lost their lead, regained it, then maintained their advantage through the final quarter. Dorde Lelić was 4-for-4 from 2-point range and 4-for-7 from 3-point range for a team-high 20 points.

“I would say that in the last two games, we have had a lot of assists and luck finally returned to us, which, in our opinion, is deserved,” Lelić said. “It is an important victory for us and we hope to continue in the wins.”

Added Brno head coach Dejan Jakara, “It’s a win that counts and I want to congratulate our players. We need to continue our commitment and keep fighting.”

With two outs in the bottom of the 10th inning, Martin Kalábek drove in Petr Čech with the winning run as Draci Brno beat Tempo Titans Praha, 1-0, in a tense pitcher’s batter on Friday night at MBS.

The following day, the Draci (7-0) went to Prague to beat Titans Praha, 1-5, and remain undefeated through the first three weeks of the season.

The Friday night game between the Draci and the Titans was a pitcher’s duel with a total of seven hits and four walks in the game. Radim Chroust started and Petr Minařík relieved for Brno. Both gave up two hits in five innings of work.

Lokomotiva To Finish Season in Play Out Bracket

Lokomotiva Brno Horni Herspice had a chance to move into the Play Off Bracket of the top women’s football league, but when they tied host Hradec Králové, 1-1, on Saturday, they were forced to settle for the Play Out Bracket.

The first game of the Play Out Bracket is Saturday against FK Dukla Praha in Horni Herspice. The game starts at 11 a.m.

Had Brno won the game in Hradec Králové they would have been guaranteed another year in the top league but they would have had to play against teams that beat them every time. As it happened, Lokomotiva was down by a goal at halftime and Anna Pušková scored in the 77th minute to tie the game.

After an emotional start of the American Football season, the Brno Alligators will try to continue their winning ways when they host the Prague Black Panthers at 2 p.m. on Saturday.

The Brno Sígrs, who lost to the Alligators on the final play on April 8, host the Aquaponik Ostrava Steelers at 2 p.m. on Sunday.

Brno Horse Racing will have its first of three racedays this Saturday at Brno-Dvorska. The first of eight races will go to post at 2 p.m.

The racecard includes five flat races and three steeplechase races. There will also be activities around the racetrack, including pony riding, carriage rides, skydiving parachutists and additional entertainment.

Admission is 60kc for adults and 30kc for children. Parking is 20kc. Bus 48 is the public transportation.