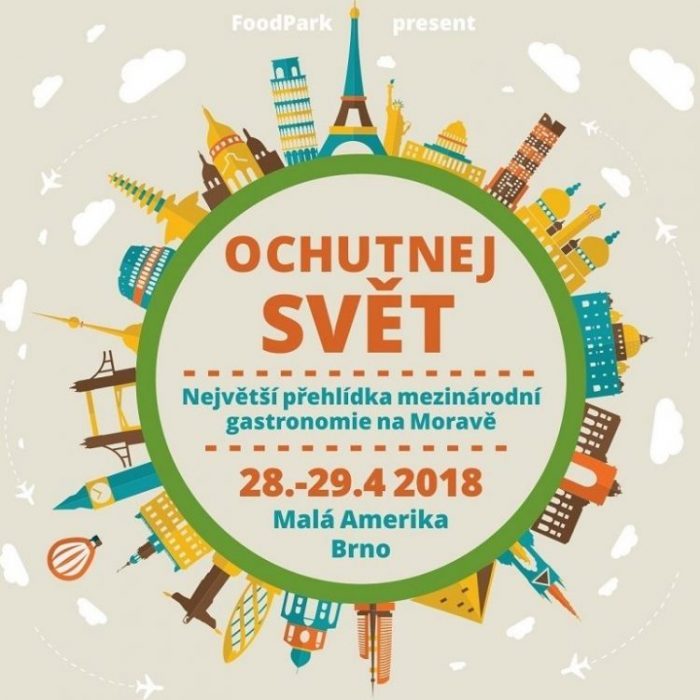 Brno, in particular, is proving to be open to diversity and novelty and is alive and kicking when it comes to food. Title picture: Ochutnej Svět

Czech food is often criticised by foreigners as being too heavy, too fried and just meat, carbohydrates and cream-laden sauce. Many times I have heard non-Czechs complain about the lack of variety and quality food available. Whilst this was true some years ago, times are definitely changing and Brno, in particular, is proving to be open to diversity and novelty whilst still enjoying dishes such as svíčková, koleno and žebra.  Not only can you now find a wide variety of restaurants but huge efforts are being made to improve attitudes, and the image of food. It’s time to dispel the myth that good food is not available in Brno although, to be honest, some people still need to learn that ketchup is not a spice!

Ochutnej Svět (taste festival), organised by Foodpark, is billed by one of the key organisers, Dana Drásalová, as the opening of the Brno food festival season where chefs will perform feats which we would love to be able to do in our own kitchens and may even try at home.  In its’ third year the event is growing and will include European, Asian, African and “extreme” food. Prepare your eyes, nose and tastebuds for snake, porcupine and insects along with other specialities.

With over 40 different cooking areas the event slogan “Bez letenek a pasů ochutnáte během víkendu celý svět! A ani letos to nebude jinak” (which roughly translates to: “Without the bother of flights and boarding passes you can taste a whole range of food from all over the world.”) is highly appropriate.

“It was awesome last year so I am definitely going this year,” comments Radka Koukalová, an avid food festival fan, and I have to agree with her wholeheartedly.

The main attraction for some foodies will be the appearance of popular chef Kamila Rundusuvá, better known as Kamu, who will cook and sign copies of her popular book Nejbarevnější kuchařka.  Also showcasing their skills and signing books will chefs from the popular TV cookshow Život z pánve along with Petr Erin Kováč (Culinary Club) and Jan Rimpler (Kuliner)

Local celebrities and dignitaries will compete against each other in a cooking challenge and those who like star-spotting can keep their eyes peeled for well-known chefs, singers and the winner of Czech Masterchef.

Kids are more than welcome and encouraged to join their families and friends. Part of the ethos of Foodpark is to encourage culinary appreciation and skills from a young age so there will be a childrens’ stage supported by Mateřinka Brno who will get them involved in various culinary activities culminating in a show on Sunday with Kamu and children creating a Thai dish.

As well as providing the opportunity to experience food from over the world such festivals bring other benefits including helping to regenerate the Malá Amerika area and raising money for charity and hospitals.

Of particular interest to chef Kováč is raising money for Tomayerova Hospital which has a dedicated department for children from all over the Czech Republic with severe or chronic psychological issues. At a recent press conference, Petr explained that the issue became closer to his heart after meeting a Brno family whose son is afflicted with severe ADHD. He went on to explain not only how the hospital treatment is helping the child but also how spending time cooking seemed to alleviate the problem.

At of the 17th of April, more than 1500 have indicated that they will be going on the FB page with a further 12,000 expressing interest. Brno is alive and kicking when it comes to food and keep your eye out for more fantastic events organised by Foodpark.

A detailed programme and ticket info can be found at the FB page and the smsticket.cz website.

https://www.brnodaily.com/2018/04/20/events-in-brno/28-29-4-tantalise-your-tastebuds-ochutnej-svet-food-festival/https://www.brnodaily.com/wp-content/uploads/2018/04/food-festival-e1524211940943.jpghttps://www.brnodaily.com/wp-content/uploads/2018/04/food-festival-e1524211909231-150x150.jpg2018-04-20T08:16:25+02:00Lily-Anne YoungArt & CultureEvents in BrnoBrno,Brno Urban Guide,Culture,Eating Out / Night Life,Things To Do in BrnoBrno, in particular, is proving to be open to diversity and novelty and is alive and kicking when it comes to food. Title picture: Ochutnej Svět Czech food is often criticised by foreigners as being too heavy, too fried and just meat, carbohydrates and cream-laden sauce. Many times I have heard...Lily-Anne Young latyoung@gmail.comAuthorLily-Anne comes from Scotland originally but has somehow found herself in Brno for the last 12 years - and foresees that it will be more.Brno Daily

Lily-Anne comes from Scotland originally but has somehow found herself in Brno for the last 12 years - and foresees that it will be more.
View all posts by Lily-Anne Young →