Home » Eating Out / Nightlife » News - Archived » You are reading »

Czechs don’t drink as much beer as they used to! According to Radio Praha (April 18, 2018), over the last year they consumed the least amount of beer in 50 years. Photo credit: Pixabay

But that doesn’t mean they are no longer the heaviest beer drinkers. According to a study made by Statista.com (January 12, 2018), a portal for statistics and studies, the Czech Republic still holds the top place for the highest beer consumption. It is followed by Poland with the significantly smaller amount of 98 litres per person, followed by Germany, Austria, Lithuania and Croatia. 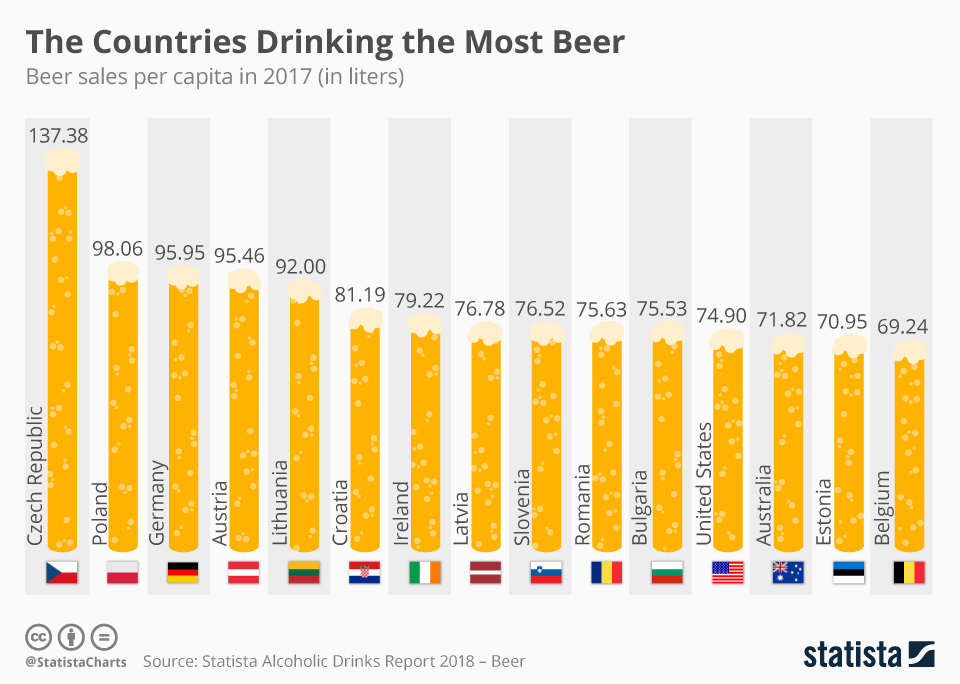 Why did beer consumption drop in 2017?

The drop can be attributed to several factors. According to Radio Praha, it was due to “the introduction of electronic cash registers, which saw some venues fold and others raise their prices, while another factor was the introduction of anti-smoking legislation.“

As of May of last year, a smoking ban was implemented, making it forbidden to smoke at restaurants, cafes, theatres, and cinemas.

This was supposed to be good news for the approximately 70% of Czechs who are non-smokers, but apparently more than half of the population finds the ban too harsh and believes that it should be loosened, according to a survey produced for Czech Radio by the polling agency Median.

However, the Czech Constitutional Court doesn’t seem to be succumbing to public opinion and has upheld the smoking ban in restaurants, while accepting some minor modifications to the anti-smoking law, such as changing the ban on the sale of tobacco and alcohol products at events primarily intended for children to events solely intended for children, reads the Czech online daily in English language Prague Daily Monitor.

According to statistics compiled by the Regional Tobacco Cessation Program (2016) and Statista (2017), if we compare the percentage of smokers in 2017 (33%) to the percentage of smokers in 2016 (36%), a conclusion can be drawn that Czechs have started to smoke less, but Health Minister Adam Vojtech noted in March that it is still too early to say if the new ban has led to the decrease in smoking, according to Prague Daily Monitor.

https://www.brnodaily.com/2018/04/24/breaking-news/czechs-drinking-and-smoking-less/https://www.brnodaily.com/wp-content/uploads/2017/07/Beer_From_All_Around_The_Czech_Republic_In_One_Place.jpghttps://www.brnodaily.com/wp-content/uploads/2017/07/Beer_From_All_Around_The_Czech_Republic_In_One_Place-150x84.jpg2018-04-24T07:57:08+02:00Valentina BoticaEating Out / NightlifeNews - ArchivedBrno,Czech Republic,Eating Out / Night LifeCzechs don't drink as much beer as they used to! According to Radio Praha (April 18, 2018), over the last year they consumed the least amount of beer in 50 years. Photo credit: PixabayBrno, Apr 24 (BD) - Compared to the now distant 1992, when beer consumption was 162...Valentina BoticaValentina Boticavalentina.botica1801@gmail.comAuthorHello Brno, I'm Valentina from the windy side of Croatia, a journalist, belly dancer, and a fighter against patriarchy.Brno Daily

« Kometa balls to fall from Brno clock
Weather report: warm week with a mix of clouds and sunshine »