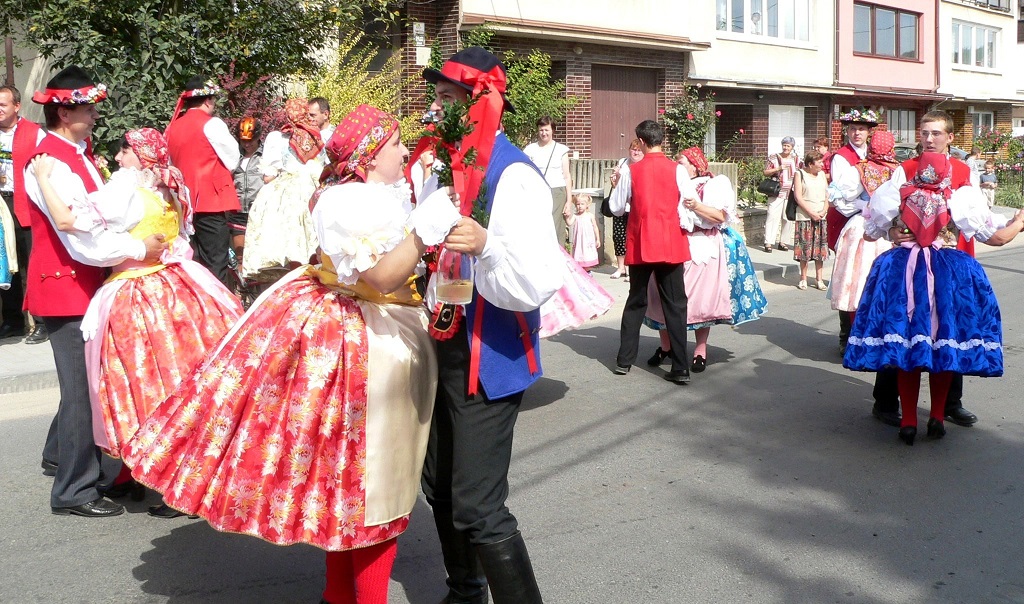 This weekend, ten folk dance performances from the states of the former Austro-Hungarian Empire will be presented in Brno by Brno Folklorní. Photo: Petr Kalivodaderivative work (Millenium187, Lisenske_slavnosti.jpg) [CC BY-SA 2.5, CC-BY-SA-3.0 or GFDL], via Wikimedia Commons.

Brno, Jun 7 (BD) – For two days, Brno Folklorní (Folklore Brno) will bring European folk culture to the city centre of Brno as part of the Re:publika Festival (to read more click here). Dancers from the countries which once comprised the Austro-Hungarian Empire will showcase their traditional folk dances.

According to the Brno tourist information and event website Go To Brno, dance ensembles from Austria, Hungary, Italy, Slovenia, Croatia, Poland, Ukraine and Bosnia and Herzegovina, as well as participants from Moravia, Bohemia and Slokavia, will perform at Brno Folklorní. Traditional clothes, folk costumes and folk music from these countries will also be presented to visitors of the event.

Organisers of the event state that there will be a focus on the cultural similarities of the post-imperial nations as well as on their differences. Brno Folklorní, which is a feature of the Re:publika Festival, is organised by the Society for Folk Traditions (Společnost pro lidové tradice, z.s.).

“For years, we lived side by side as people from a large part of Europe. We influenced one another’s lives even without knowing and also grew apart. One hundred years ago, the Austro-Hungarian Empire fell apart and ten independent countries succeeded it. How do we differ and in what aspects are we similar in our “ordinary lives”? That’s one of the ideas we’re attempting to get at with Brno Folklore as part of the celebration of the 100th anniversary of the foundation of an independent Czechoslovakia,” said Milan Zelinka from the Society for Folk Traditions in explaining the reasoning behind Brno Folklorní.

Brno Folklorní will take place at Brněnské výstaviště from Saturday, June 9 at 2pm, to Sunday June 10 at 8pm according to the Facebook page of the event.

Be sure to visit Brno Folklorní to take a journey to the post Austro-Hungarian countries and their culture, history and traditions through folk dance and music.

https://www.brnodaily.com/2018/06/07/events-in-brno/9-10-6-brno-folklorni-brings-european-folk-culture-to-brno/https://www.brnodaily.com/wp-content/uploads/2018/06/Lisenske_slavnosti_vyrez-1024x604.jpghttps://www.brnodaily.com/wp-content/uploads/2018/06/Lisenske_slavnosti_vyrez-150x88.jpg2018-06-07T09:02:23+02:00Berk BüyükbalcıArt & CultureEvents in BrnoBrno,Culture,Czech Republic,Events in Brno,Things To Do in BrnoThis weekend, ten folk dance performances from the states of the former Austro-Hungarian Empire will be presented in Brno by Brno Folklorní. Photo: Petr Kalivodaderivative work (Millenium187, Lisenske_slavnosti.jpg) , via Wikimedia Commons.Brno, Jun 7 (BD) – For two days, Brno Folklorní (Folklore Brno) will bring European folk culture to...Berk BüyükbalcıBerk Büyükbalcıberk_buyukbalci@hotmail.comAuthorAhoj Brno, this is Berk from İstanbul, a light traveller of short distances and journalist who is possessed with curiosity about new places and cultures.Brno Daily

Brno, Culture, Czech Republic, Events in Brno, Things To Do in Brno

« New towing regulations on street cleaning days
Weather Report: Thunderstorms to block out the sun over the weekend »