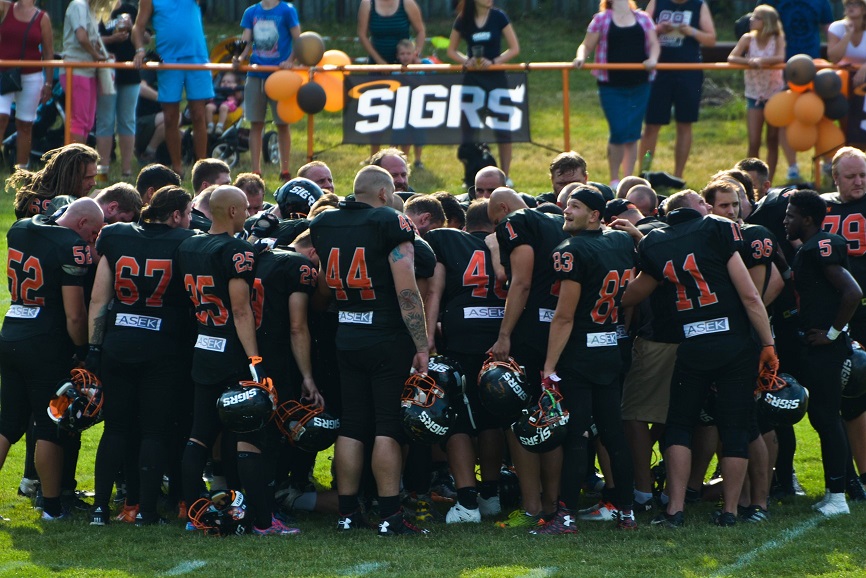 The Sígrs played in the second-league title game last year. This year they are in the top-league postseason. Photo credit: Jana Povolna

Similar to how they started the regular season, the Brno Sígrs lost their final regular-season game with a missed kick and no time left on the clock, losing to the visiting Pardubice Stallions, 33-34, on Sunday.

The other Bitters League semifinal is between the Aquaponik Ostrava Steelers and the Prague Lions on July 7 at 3 p.m. The semifinal winners advance the title game on July 14.

On Sunday against Pardubice, Michael Lindsey scored rushing touchdowns of 10 and 36 yards against Pardubice (4-6). He also returned a punt 46 yards for a score and ran in a two-point conversion.

With no time left on the clock, Lindsey hit David Svítil for a 9-yard passing touchdown. The extra point would have tied the game.

Both the Sígrs and Pardubice finished the regular season with a 4-6 record. The Sígrs advance to the playoffs because they won in Pardubice, 0-42, on April 29. The Sígrs would have had to lose by several touchdowns to be denied the fourth spot in the playoffs.

The Sígrs, a team that formed just six years ago, started its first season in the Bitters League when a blocked a field goal attempt was run back for the winning score by the cross-town rival Alligators with no time on the clock.

Alligators Finish Season With A Bang

The Brno Alligators (3-7) scored six touchdowns against the visiting Pilsen Patriots to win their season finale, 41-12.

Five different players scored. Luke Wildung (2-yard run) and Tomáš Fortelný (1-yard run) put the Alligators up 14-0 after the first quarter. Filip Špringer scored on second-quarter runs of 12 and 7 yards to give the Alligators a 28-0 halftime lead.

In the second half, David Michálek caught a 21-yard touchdown pass from Fortelný and Tomáš Novák scored on a 1-yard run. Jan Nestr was a perfect six-for-six with extra points.

The East scored a run in the first inning and added six in the seventh to cruise to a 7-0 victory in the Czech Extraliga All-Star Game in Prague on Saturday.

Brno was represented by 10 players on the East team.

After a break for international play, the extraliga season will resume on July 20 and continue into September. Draci Brno finished the first part of the regular season with a 26-1 record and a four-game lead in the standings. Cardion Hroši Brno (17-10) were fifth. Technika Brno (3-24) was last.

When league play resumes, the standings will be a bit different: the top six teams from the first part of the regular season will play against each other for postseason seeding purposes; the bottom four teams will play the top teams of the lower league for the right to stay in the extraliga next year.

FC Zbrojovka Brno will start the second-league season at home against their former first-league foe, Jihlava, on July 22.

The matchups for the Fortuna národní liga were drawn last week. Click here for the schedule. Exact dates and times are to be announced. Sundays at 6 p.m. is expected to be the normal start time for home games in the second league.

Both Zbrojovka and Jihlava were relegated from the HET Liga in May. Jihlava was 15th. Zbrojovka was last.

Because of the match-up system, Zbrojovka will play in Jihlava on the final weekend of the season in late May, which could be an important match if the two teams prove to be among those fighting for a berth in the first league.