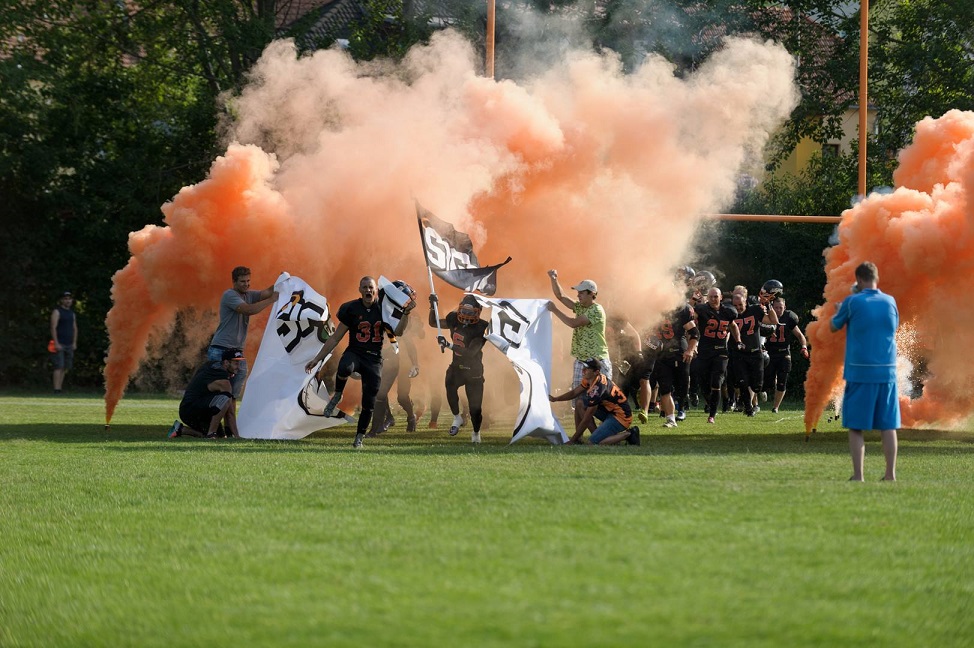 The Brno Sígrs have made a big splash with their exciting play. Photo credit: CAAF

Sígrs Travel to Prague for Semifinals

Six years ago, the Sigrs officially started as an American football team. This Sunday, they will play in the postseason of the Bitters League. Not a bad growth arc.

Each year, the team has made improvements and slowly worked its way up the national system. Last season, they made it to the Bitters Silver Bowl, the second-league title game. This year, they played in the top league. And this Sunday they will play in the semifinals against the undefeated Prague Black Panthers (10-0) at 4 p.m. in Prague.

The other Bitters League semifinal is between the Aquaponik Ostrava Steelers and the Prague Lions on Saturday at 3 p.m. The semifinal winners advance the title game on July 14.

Clearly, the Sigrs benefited from a lighter schedule and the ability to have an extra international player; nevertheless, they won the games they had to win and survived the games that they let slip through their fingers — which included a no-time-on-the-clock, blocked-kick, return-for-a-touchdown loss in the opening game of the season and a missed-extra-point squandering of a tie in their regular-season finale. They finished the season 4-6.

Michael Lindsey is the main threat for the Sigrs. In 10 games, he has rushed the ball 118 times for 1,035 yards and 13 touchdowns. He is a multi-tool threat who even plays quarterback.

Overall, Lindsey is the top scorer in the league, with a total of 18 touchdowns, including one passing TD and four return TDs. He also converted two 2-point conversions. He led the league in all-purpose yards, including 195 receiving, 290 on punt returns and 310 on kick returns, for an average of 190.5 per game.

On the other side of the ball, Tyrone Clark was second in the league in tackles, including 72 solo tackles and 30 assisted tackles. He also had four sacks.

Two-time defending champion HC Kometa will start their quest for a third consecutive title on Sept. 14 when they travel to Chomutov.

The first regular-season home game will be on Sunday, Sept. 16 when the Plzeň comes to town. The puck drops at 5 p.m. It will be difficult to get tickets for the home opener and, as usual, most of the home games.

If you have never experienced a Kometa game, it might be worth your while to go to a preseason game. Friendly games are scheduled throughout the month of August on Aug. 9 against Slovan Bratislava; on Aug. 14 against Znojmo; on Aug. 16 against Spartak Moskva; and on Aug. 23 against Amur Chabarovsk. Click here for the preseason schedule.