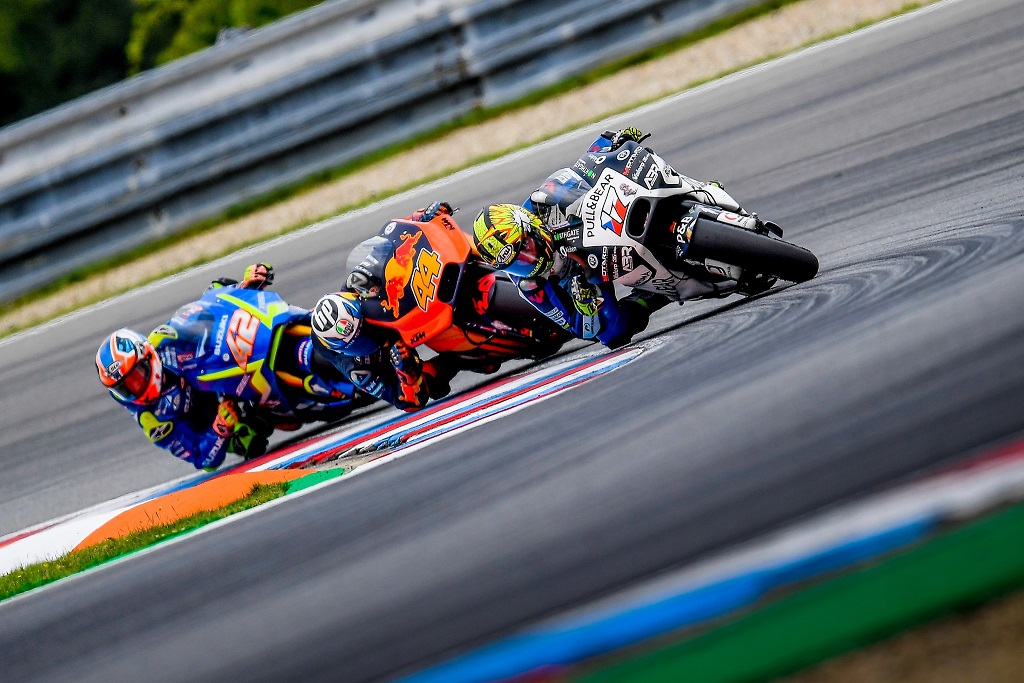 Brno will be at the center of the motor sports world when thousands of fans will come for the annual Monster Energy Grand Prix. Photo credit: Automotodrom Brno.

Perhaps there are times that while driving on the freeway you get a spike of adrenalin when you are passing a car or banking right while going downhill faster than you had expected.

Now, double your speed, eliminate two of the wheels and the shell of the car, turn the vehicle at a severe angle for every turn such that your knee is just about to rub the road, and add several motorcycles within inches. Oh, and make the whole thing extremely competitive with a lot of money on the line, tens of thousands of sun-soaked fans in the stands and a worldwide television audience.

That is what the Monster Energy Grand Prix and Marc Marquez will bring to Brno this Friday, Saturday and Sunday. Qualifying will take place the first two days. The main MotoGP event will begin on Sunday at 2 p.m.; there will also be title races for Moto3 at 11 a.m. and Moto2 at 12:20 p.m.

Click here for more information (in English), including the schedule of events for the weekend and videos.

Tickets are still available: Click here to purchase them from through motogp.com. The race will also be shown live on local television.

Marquez, who rides for Honda, won the Brno motorcycle race last year, won the 2017 riding title and is leading the rider standings this year with 165 points through nine races.

Longtime superstar Valentino Rossi, a perennial local favorite, is second in the standings with 119 points. Rossi, who is still riding at 39, won his first GP in Brno in 1996. He has nine overall titles. Rossi’s recent local form is impressive: he was second in 2016 and fourth last year after passing 2016 Brno winner Cal Crutchlow of Great Britain on the final lap.

If you are in town this weekend, expect many of international visitors and a lively nightlife.

There will also be two events open to the public. A Jetsurfing exhibition will put the professional motorcycle racers onto a different vehicle on Thursday at Horní rybník in Popůvky at noon. Expect to see Johann Zarco, Abraham, Joan Mir, Fabio Quartararo, Marcel Schrotter, Kornfeil and John McPhee.

Additionally, several of the top riders will be available for autographs at Galerie Vaňkovka on Thursday from 6 to 6:30 p.m. Expected to attend are Abraham, Tom Lüthi, Kornfeil, Marco Bezzecchi, Arón Canet, and Salač.

And, for everyone in Brno, know that around 1:25 p.m. on Sunday, military jets will fly over the crowd and the city.

Last year, Marquez won the Brno race in front of more than 87,000 fans in rainy conditions. Honda teammate Dani Pedrosa was second and Maverick Viñales completed a Spanish podium. Marquez averaged 161.1 kmh and won by more than 44 seconds, largely because of his early tire change to adjust to the wet track conditions. Defending champion Crutchlow was bruised and battered (but without any broken bones) after a fall in qualifying on Saturday sent him to the hospital; he settled for fifth place after he was passed in the final lap by fourth-place Rossi.

The Masarykův Okruh (Masaryk circuit, Automotodrom Brno) is west of the city center. The track is 5.403 km long with 15 turns (nine to the right and six to the left).

Draci Brno won three more games to maintain their dominance in Czech baseball, finishing the weekend with a 2-4 victory at Arrows Ostrava, their nearest rivals. Cardion Hroši Brno also won three games in the extraliga. And Technika extended its winning streak with two wins in the Playout Bracket.

In all, local teams went a perfect 8-0 last week.

The league-leading Draci are 6-0 through the first two weekends of the Playoff Bracket. Against the Arrows, who are now 5-1 since the league restart, John Hussey pitched a masterful game for the Draci, going 8.2 innings on a hot afternoon in Ostrava and giving up five hits while striking out eight and walking none. Both runs were earned, including a solo home run. Offensively, Přemek Chroust led the way with three hits and three RBIs. Petr Čech added another three hits and the other RBI.

“I’m happy with the whole weekend,” Arnošt Nesňal, the general manager of Draci Brno was quoted as saying. “We played high-quality baseball, we hit well and played defense. The pitchers were great.”

The Draci have three games against Tempo Titans Praha this weekend: home on Friday at 7 p.m., then games on Saturday and Sunday in Prague. The Draci will play Ostrava again on Aug 24 in Brno and Aug. 25 in Ostrava.

Cardion Hroši Brno rebounded from a three-game sweep by the Draci to even their record with three wins, scoring 26 runs in three games. Hroši host a double header against Kotlářka Praha on Saturday.

Technika, which is playing in the Playout Bracket, stretched its winning streak to four with victories over Blesk, 2-8 and 18-3, in a Saturday double header. Technika will play a double header against Hluboká this Saturday.

Zbrojovka returns to Brno Sunday to play Chrudim at 8 p.m. The team has yet to win, but, given their performance on the road last weekend, there is reason to be excited.

Zbrojovka has one point through the first two games in the Fortuna:Narodni Liga, losing their season opener to Jihlava on July 22 and staging a comeback to tie FC Sellier-Bellot Vlašim last Sunday.

At Vlašim, the team’s offense controlled the game and was close to breaking into the victory column. The home team scored in the first half and then midway through the second to take a two-goal lead, but Zbrojovka never gave up and their forward play resulted in some fortunate breaks: an own-goal a minute after the second Vlašim goal and, four minutes later, a penalty that Lukáš Magera converted.

“Of course, we cannot be satisfied with one point,” Pivarník said. “We were basically in control of the opponent’s goal, but we still lack the patience in the pre-final and final stages (of scoring) and we often miss. A similar situation awaits us in other matches. We have to get used to it and get better with it.”

The schedule for the Czech Football Cup was announced. Zbrojvka will travel to Žďár n. Sázavou for a first-round game on Wednesday, Aug. 15, 2018.

https://www.brnodaily.com/2018/08/01/sport/brno-sports-weekly-report-feel-the-power-the-roar-of-motogp-visits-brno-this-weekend/https://www.brnodaily.com/wp-content/uploads/2018/08/MotoGP010818-1024x683.jpghttps://www.brnodaily.com/wp-content/uploads/2018/08/MotoGP010818-150x100.jpg2018-08-01T10:50:29+02:00Bruno ZalubilSportBrno,Brno Urban Guide,Culture,Czech Republic,Events in Brno,Lifestyle and Fashion,News,Sport,Things To Do in BrnoBrno will be at the center of the motor sports world when thousands of fans will come for the annual Monster Energy Grand Prix. Photo credit: Automotodrom Brno.Brno, Aug 1 (BD) — Brno baseball teams complete perfect 8-0 weekend, Zbrojovka plays Sunday at 8, and the Brno sports schedule. MOTOR...Bruno ZalubilBruno Zalubilbzalubil@hotmail.comAuthorA connoisseur of the unpredictable and unscripted drama of sports.Brno Daily