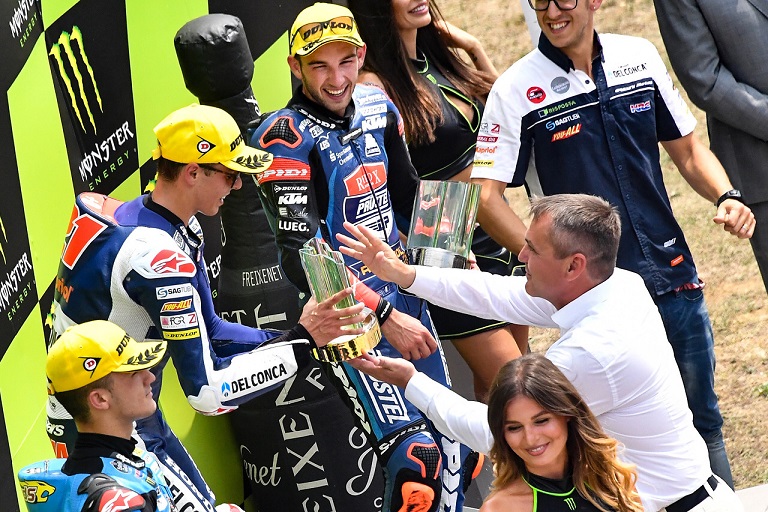 It takes the human eye between 3/10ths and 4/10ths of a second to blink. On Sunday, at the Masaryk circuit, Automotodrom Brno, it took that much time for the first three motorcycle racers of the Monster Energy Grand Prix to cross the finish line.

Blink, and you missed the third closest podium finish in MotoGP era.

Dovizioso led for most of the 21-lap race and rode masterfully through the final circuit. His average speed was 165.5 kmh. Lorzeno and Marquez traded positions behind Dovizioso but neither was able was able to catch the winner.

“I did not really expect to have such a great result on the circuit that was most difficult in the series,” said Dovizioso, who has finished second in Brno four times.

Márquez, who won the 2017 riding title, maintained his sizeable lead in this season’s overall standings with 181 points. Rossi, who became the first to pass the 6,000-point mark in a MotoGP career, is second with 132. Dovizioso now has 113 in third.

“It was a battle to the last moment,” said Marquez of his 100th MotoGP start. “I have mixed feelings. Perhaps just to defend the (season) title I can smile at least a bit.”

Earlier in the day, the local fans got another thrilling finish in the Moto3 race when the top six riders finished within 0.9 seconds of each other. To add to the excitement, 25-year-old Czech Jakub Kornfeil was in the mix, often taking the lead in the final three laps.

Draci Brno guaranteed that they would advance into the playoffs when they beat the Tempo Titans, 11-6, in Brno on Friday.

Then things got interesting when the same teams met in Prague for two games. On Saturday, the Draci came from behind with two runs in the top of the eighth inning for an eventual 2-5 win.

On Sunday, a pitcher’s duel between Draci Radim Chroust and Titan Jake Rabinowitz took the game into extra frames with no score. Both teams scored in the 11th inning to force another inning, and that is when the Draci offense came alive with three runs. The final score was 2-4, although only one of the game’s six runs was earned on the hot afternoon.

The Draci are now 9-0 through the Playoff Bracket.

Cardion Hroši Brno split a double header with Kotlářka, 5-4 and 0-3, in Brno on Saturday, then lost to Kotlářka, 12-5, in Prague on Sunday.

Technika stayed perfect in the Playout Bracket by scoring 28 runs in winning both parts of a double header against Hluboká on Saturday. They are 6-0 and atop the standings.

For the first time since a cold February night, the fans of FC Zbrojovka Brno were able to enjoy a victory at Srbska Stadium on Sunday.

Zbrojovka beat MFK Chrudim, 3-0, and they are now 1-1-1 through three rounds of the Fortuna:Narodni Liga. The Brno offense was effective throughout the game, moving the ball around well and finding the open player for the three goals and several decent scoring opportunities.

Damián Bariš, a Slovak midfielder who arrived over the summer, scored the first and third goals. The first goal — at the 39-minute mark — was a team effort set up with passes from Jakub Šural and Antonin Růsek that Bariš sent on the ground into the left corner of the goal. All three players, with a reverse order for the setup passes, teamed for the third goal of the game at the 83rd minute.

Lukáš Magera scored the middle goal at the hour mark. The 195-cm, 35-year-old striker has a goal in each of Zbrojovka’s games so far this season.

Captain Dušan Melichárek notched his first shutout of the season. Robert Bartolomeu, a new player from Zlin who appeared in his first Zbrojovka home game, and Peter Štepanovský were both effective, with several nice chances.

In a change to the schedule, Zbrojovka has a first-round Czech Football Cup game at Žďár n. Sázavou on Wednesday, Aug. 22, at 5 p.m.