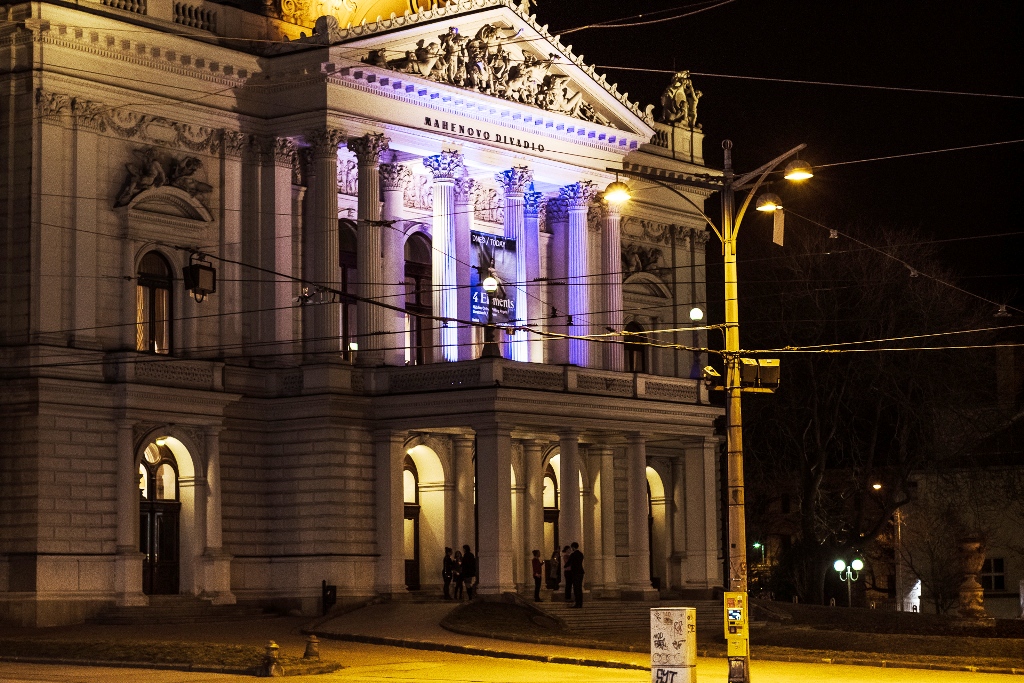 The National Theater in Brno (NdB) revealed its plans for 2018-2019 season last Thursday: Seventeen premiere performances, The Janáček Brno International Opera and Music Festival, events to celebrate the centenary of the Czechoslovak Republic, and the return to the newly reconstructed building of the Janáček Theater. Many of the NdB’s performances are truly international. Worldwide recognized directors, musicians, actors, and dancers are preparing top quality pieces in the universal language of art right here, in Brno. Even though the quality of art is truly international, compared with theater-going abroad, the prices are more affordable. Photo credit: Casadei Graphics.

Brno, Aug 31 (BD) – The renown Czech composer’s Bedřich Smetana’s celebrated opera “Libuše” in the new production of Jiří Heřman, the Artistic Director of the Janáček Opera company, will open the new season. “Libuše” is based on a Czech historical legend: the queen Libuše, a legendary ancestor of the Přemysl dynasty and the title character of the opera, prophesied the founding of Prague. “Libuše”, one of the symbols of the ancient roots of the Czech nationhood, will be performed on September 7 as the last performance on the temporary premises of the Brno Exhibition Center (BVV). Tickets cost between CZK 400 and 800.

Two weeks after this grand opening, on September 24, the 2018/2019 Season will start with an open-air performance in the Zelný trh square. The opera and ballet ensambles are preparing a show including selections from new pieces and from the best-received performances of the previous season, performed by the cast and orchestra of Janacek’s opera NdB. This event is free of charge. The performance starts at 6pm.

As part of the new season the renown Janáček Theater will host a performance, Leoš Janáček’s “Káťa Kabanová” on November 11. Janáček’s music for the opera is based on a play by Alexander Ostrovsky, “The Storm.” But it is reputed that another source of Janáček’s inspiration was unrequited love for Kamila Stösslová. The opera premiered in November 1921 in the National Theater, Brno.

The big opening ceremony and the official launch of the Janáček Brno Festival will take place on November 17 with Janáček’s opera “The Cunning Little Vixen.” This opera will officially launch the three-week festival. The prices for this opening show are between CZK 173 and CZK 1,500, with a 30% discount with “Festivalpass” for those who order ticket for at least three Janáček Brno Festival performances.

The “Janáček Brno International Opera and Music Festival” (17/11-5/12 2018) promises to be very special this year. The festival’s theme will revolve around the 2018 centennial of Czechoslovakia. During the festival, music lovers can follow the complete oeuvre of Janáček interpreted by prestigious foreign and national ensembles. The Opera Director Heřman sees the connection between the ideas of then newly established Czechoslovakia and Janáček’s music, which he describes as “filled with understanding and humanity”. The festival website and program are available in Czech, English, and German. Brno Daily will soon bring a comprehensive report dedicated to the festival.

An important event of the second half of the season will be the reintroduction of one the world’s most famous ballets, “Swan Lake” by Peter Ilyich Tchaikovsky, on February 19, 2019. Additionally, Mário Radačovský, the NdB Ballet Artistic Director, listed the premiere of the new production of Sergei Prokofiev’s ballet “Romeo and Juliet” among the top highlights of the season. The ballet drama will be introduced on March 8, 2019, at Janáček Theater, exactly 80 years after its worldwide premiere here, in Brno. Tickets are priced from CZK 400 to CZK 800.

Mahen Theater will introduce several plays with English subtitles in the new season. These plays are marked with “EN SUB” in the program. One of them is “Kerosene Lamps” [“Petrolejové lampy”],  a Czech play by Jaroslav Havlíček on September 15.

The new season will bring a new marketing campaign. In the previous years, the theater introduced a campaign called “various faces of the theater” (both theater employees and viewers) in an effort to make the public more aware of the fact that the theater is a result of the work and passion of many. This year, a campaign called #bezrozdilu (“with no differences”) attempts to connect people according to a motto “We play for all!”. As the NdB official release says: “We play for people of all religions, skin colors, education backgrounds, sexual orientations, political views, from the youngest to the oldest.” The new campaign features a happening, a theater seat placed in various locations where “people without difference” go and live. According the NbD release, this happening will play the main role in the new campaign.

https://www.brnodaily.com/2018/08/31/brno-urban-guide/ballet-opera-theater-a-sneak-peek-into-the-national-theater-brno-2018-2019-season/https://www.brnodaily.com/wp-content/uploads/2018/08/DSC_3903-1024x683.jpghttps://www.brnodaily.com/wp-content/uploads/2018/08/DSC_3903-150x100.jpg2018-08-31T08:00:44+02:00BD StaffArt & CultureBrno Urban GuideEating Out / NightlifeBrno,Brno Urban Guide,Culture,Eating Out / Night LifeThe National Theater in Brno (NdB) revealed its plans for 2018-2019 season last Thursday: Seventeen premiere performances, The Janáček Brno International Opera and Music Festival, events to celebrate the centenary of the Czechoslovak Republic, and the return to the newly reconstructed building of the Janáček Theater. Many of the...BD StaffBD Staff team@brnodaily.czAdministratorBrno Daily - English News and Events in Brno.Brno Daily