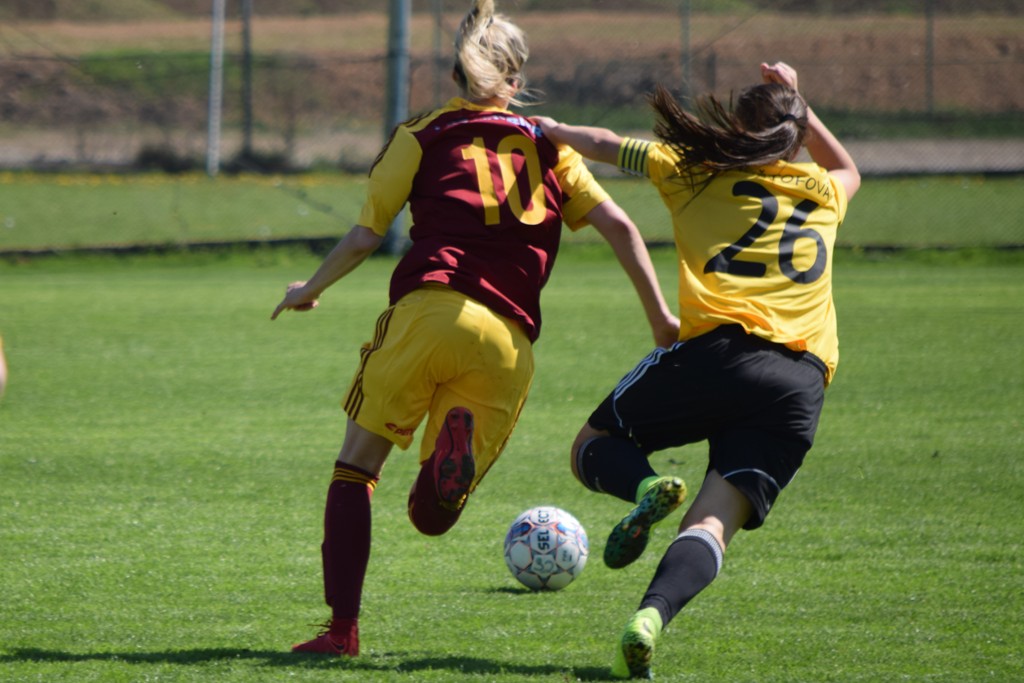 Lokomotiva Brno-Horni Herspice returns from the road for their first home game of the season on Saturday at 11 a.m. Photo credit: Pavel Škarpišek.

On Tuesday evening, on a well-manicured field in the quiet bedroom community of Horni Herspice, the Lokomotiva women’s football team sprinted through drills, sweated through a half-hour full-team scrimmage and wound down with a slow jog — all so that they would be prepared for their first home game of the season.

Lokomotiva Brno-Horni Herspice will host FC Slovan Liberec on Saturday at 11 a.m. They have three points from two road games in the top women’s league.

Admission is 30kc, and it comes with a free beer and hot dog — and, what head coach Vladimír Beker says, will be an aggressive style of football.

“We want to play fast football,” Beker said. “We aim for offensive football. We want to attack a lot.”

Through two games, Lokomotiva has only scored one goal and is 1-0-1. Both matches were in Prague: an 8-0 loss at Sparta and a 0-1 win at Dukla.

The team captain is Tereza Krištofová. She is one of the few players from the team that last season finished last in the league after a terrible spring. The club stayed in the top league because no other team was prepared to move up from the second league.

“We had to make some changes to make the team a little bit stronger,” Beker said. “There are several new players.”

Three Americans, two Canadians and five Slovaks have been added to the team. The Lokomotiva youth program also provides a pool of talent.

“These new players provide more competition on the team,” Beker said. “They make this team more attacking, more aggressive. They give us a better tempo. The girls have to fight for their place on the team.”

The top women’s football league is usually dominated by Sparta and Slavia of Prague. Then there are several teams that, last year in particular, were within a few points throughout the season.

“Slovacko, Liberec, Plzen, us — it is very even,” Beker said. “It is all up to how the team is prepared. It comes down to how to team comes into the game. I think that all of those teams are really that even.”

Liberec “is a quality team,” according to Beker. “They are experienced. They have played together for a long time.”

The remaining home games are later in the fall: on Sept 22 Lokomotiva hosts SK Slavia Praha, then they finish with three in a row against 1. FC Slovácko on Oct 13, AC Sparta Praha on Oct 20 and FK Dukla Praha on Oct 27.

Zbrojovka travelled to the northwest of the Czech Republic last Thursday, took a two-goal lead over host Ústí nad Labem, then held on take a point from a 2-2 tie in the debut game of Pavel Šustr.

Šustr, who was named the head coach only days earlier, was generally pleased.

“From the point of view of hard work, I would give the players a high mark and appreciate their performance,” he said. “I believe this was the first step on the way that we want to go and it will gradually improve. Against this good team, the point is good for us.”

Zbrojovka plays today in the second round of the MOL Cup when they travel to nearby Rosice. The game starts at 5 p.m.

After the MOL Cup game, Zbrojovka has a long break until it hosts Táborsko on Sunday, Sept 16 at 6 p.m.

Both goals in Ústí nad Labem were from standard situations and both goals were completed by 19-year-olds. Antonín Růsek scored the first when a corner kick came perfectly to him in the seventh minute. Then, Ladislav Krejčí got a loose ball in the box and high kicked it into the goal in the 26th minute. The defense couldn’t hold the lead.

Zbrojovka is now 2-2-3 with eight points and in ninth place. Half of the points were taken from the top two teams in the league: this tie at league-leading Ústí nad Labem on Thursday and a win at home against second-place SK Dynamo Č. Budějovice on Aug 17.

Lukáš Magera, who served as the captain on Thursday, was held scoreless for the first time this season. He still leads the league with six goals. Goalkeeper Dušan Melichárek, who had been captain from the middle of last season through to this game, was busy, especially during the second half, and made many important stops.

“We are going to train, a lot and hard,” Šustr said. “We want to concentrate more on the combination game, passing and other aspects.”

Listen to the Zbrojovkast Podcast

If you can’t get enough of FC Zbrojovka Brno, there is a new outlet to fill the void: The Zbrojovkast.

It’s a regular podcast by two British guys, David and Sam, who have followed the team around the country for several years. It touches on match reports, previews, a bit of history of the places they visit, a “beer of the podcast” section, some music and general football geekery.

For the most recent episode, Click here. Regular episodes are available at https://soundcloud.com/zbrojovkast.

Dondrei Hubbard hit a two-run homer as Draci Brno put up all five runs it would need in the first inning en route to beating the visiting Cardion Hroši Brno last Thursday. The final score was 5-1.

The Draci lost at Eagles Praha, 5-3, on Friday, but it didn’t matter: they finished the Playoff Bracket of the season at the top of the standings with a 16-4 record. They automatically advance to the best-of-five Czech Series, which beings in late September in Brno after a break for international play.

It is the 24th time in a row that the Draci will play in the Czech Series.

The opponent will be determined by the best-of-three Wild Card series between Arrows Ostrava (14-6) and Eagles Praha (11-9). The teams play in Ostrava on Friday, in Prague on Saturday and, if necessary, in Prague on Sunday.

Cardion Hroši Brno (4-16) failed to win since early August; they are done for the season.

In the Playout Bracket, Technika Brno (9-5) split a doubleheader with Skokani Olomouc and defended their right to stay in the extraliga next season.

If you missed the MotoGP — or want even more motor-sport action — the Masaryk Circuit will host the Masaryk Racing Days this Friday, Saturday and Sunday.

The highlight is the BOSS GP. BOSS, which stands for Big Open Single Seaters, is for cars that are similar to indy cars.

Entrance to Tribune C is free on Friday. Tickets are available at the entrance gates for all three days. 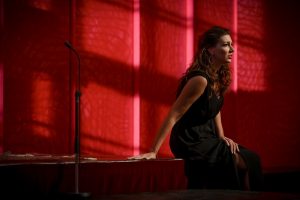 A connoisseur of the unpredictable and unscripted drama of sports.
View all posts by Bruno Zalubil →
« City Residents Say “No” to Statue of Joseph II on Dominikánské Náměstí
International Education Possibilities in Brno: An Interview with the Headteacher of the International School of Brno »