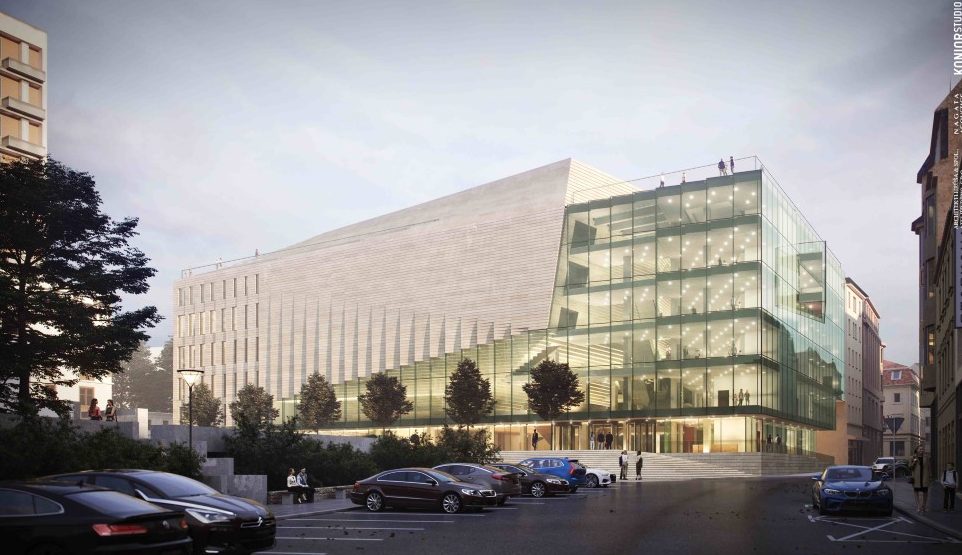 Brno, Sep 18 (BD) – “Hall for Brno” or “Janáček Cultural Center” are the working titles for the project to construct a new concert hall in the empty space between Besední and Veselá Streets. The new hall will stand in the immediate vicinity of the Besední dům, the current home of the Brno Philharmonic in the center of Brno. The building will be 77 meters long, 44 meters wide, and 33 meters high, with two terraces with views of Špilberk Castle and Petrov Cathedral, according to the specialist website Opera Plus (“Janáčkovo kulturní centrum Brno: Špičkový sál pro třetí tisíciletí”, Sep. 14, 2018).

The “Hall for Brno” construction project will become home to some 100 members of the Brno Philharmonic, who have been rehearsing in unsatisfactory conditions.

According to the project team, the characteristic feature of the new concert hall is its duality joining two structures in one building. “One structure is massive, closed and subordinate to music. The second part is transparent, open to people,” said the team. “The concert hall is, of course, the heart of the whole building. We designed it for an audience of approximately 1,300. The big stage provides almost unlimited possibilities to cast the orchestra from solo recitals and chamber concerts to numerous large symphonies, to compositions in which the choir also performs,” said Tomasz Konior, head planner of the project and chief architect at Konior Studio.

“Thanks to the new hall, listeners will finally appreciate the quality of the orchestra, and I believe that Brno will also attract top foreign artists, who we currently have nowhere to invite,” said Brno Philharmonic Director Marie Kučerová in a press release.

“Brno won the title of ‘City of Music’ at the end of last year and joined the UNESCO Creative City Network,” said Brno Mayor Petr Vokřál at Friday’s press conference. “The musical and cultural reputation of our city will increase again, and I believe it will attract visitors from further away,” he added.

The first stage of the project, the construction of a 191-space underground car park, has already finished. The car park will open when the whole building is finished.

“Janáček Cultural Centre” is among the strategic projects of the City of Brno. The total cost of the project is to reach 1.276 billion CZK and the hall is to be finished at the beginning of the next decade (in 2022 or 2023 according to post on Petr Vokřál’s official Facebook profile). Read more in our previous article “Construction of CZK 1.276bn concert hall to begin next year”.