October in National Theatre Brno: Premiere of Children of Paradise with English Subtitles and Czech Myth Reimagined on a Grand Scale 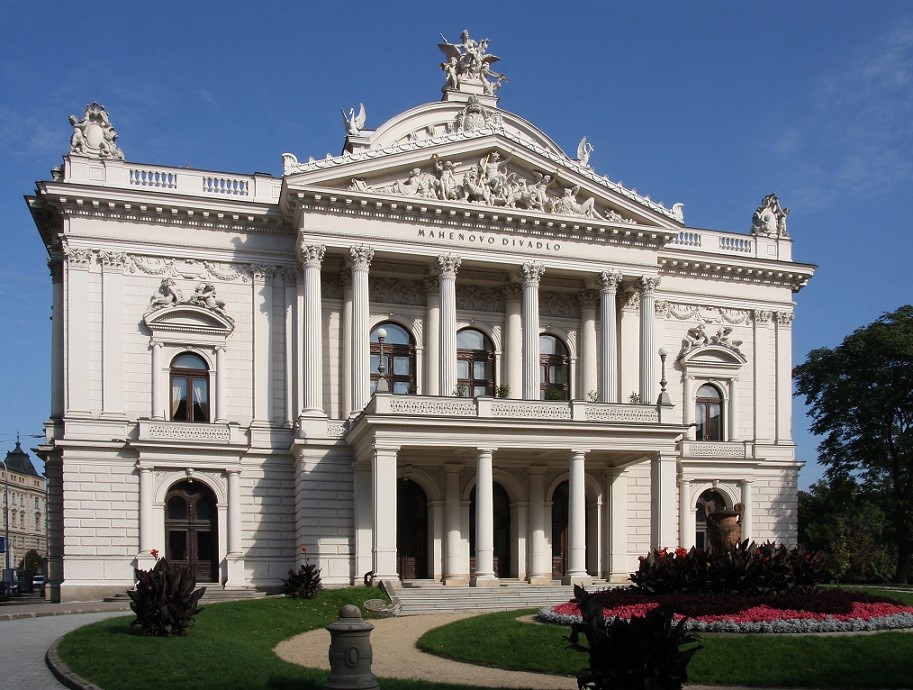 Brno, Oct 5 (BD) – Autumn is truly with us, and this month English speaking theatregoers can enjoy three screen-to-stage adaptations with English subtitles.

Two plays with English subtitles are showing in October at the Mahen theatre, both adapted from well regarded movies. The first is an adaptation of Tom Hooper’s twee multiple award-winning crowd pleaser, The King’s Speech. It’s the story of King George VI who suffers from a chronic stammer and his relationship with his loquacious speech therapist Lionel Logue, who attempts to cure the monarch’s impediment before a critical speech to the nation on the eve of World War II. Given the nature of the suffering and immense death toll once the conflict kicked off, the stakes are pretty low, but David Seidler’s Oscar-winning screenplay – adapted here for the stage by Jitka Sloupová – should find a good home in the theatre.

Later in the month, there is the premiere of Children of Paradise, originally written for the screen by poet and scriptwriter Jacques Prévert. The film version is critically adored, currently sitting joint 73rd in Sight & Sound’s revered all time top 250 list. The story follows the complicated love lives of a young mime artist and the courtesan he falls for in 1820s Paris, and as a cinephile I’m eager to see how a three hour epic romance translates to the stage.

Lastly there is Jaroslav Havlíček’s drama Kerosene Lamps. The tragic story of a young woman who marries her cousin only for him to fall into ill health was also adapted for the screen in the Seventies, when it competed at the Cannes Film Festival.

There’s another opportunity to see Bedrich Smetana’s Libuse at the Brno Exhibition Centre. Telling the tale of the mythical ancestor of the Czech people, the new version premiered last month with a modern slant to celebrate the country’s 100th anniversary. The production makes full use of the cavernous interior of the Exhibition centre, giving the legend a sense of grandeur that might be restricted on a regular theatre stage. It’s a true spectacle, and opera lovers should grab the chance to see it in this unusual setting.

For those who prefer something a little more light-hearted in a more traditional environment, there is Mozart’s risque comedic opera Cosi fan tutte at the Mahen theatre. The third of the maestro’s collaborations with librettist Lorenzo da Ponte, it is a sex farce about two young men who are persuaded by a cynical older man to disguise themselves and try seducing each other’s fiancée.

The Mahen Theatre also hosts Antonín Dvořák’s The Devil and Kate. The fairy-tale opera was written towards the end of the composer’s life, and concerns a chatty young woman who is whisked off to Hell by a devil. Once there she proves more than a match for Lucifer and his minions.

The Mahen Theatre will continue with their production of Tchaikovsky’s Sleeping Beauty, while there is a chance to see some experimental ballet at the Reduta theatre with Amadeus MozArt. Three different choreographers interpret the composer’s music with their own strikingly difference dance piece.

https://www.brnodaily.com/2018/10/05/brno-urban-guide/october-in-national-theatre-brno-premiere-of-children-of-paradise-with-english-subtitles-and-czech-myth-reimagined-on-a-grand-scale/https://www.brnodaily.com/wp-content/uploads/2018/09/mahens-tehater-brno.jpghttps://www.brnodaily.com/wp-content/uploads/2018/09/mahens-tehater-brno-150x113.jpg2018-10-05T07:05:48+02:00Lee AdamsArt & CultureBrno Urban GuideBrno,Culture,Events in Brno,Theatre,Things To Do in BrnoOctober highlights: theatre with English subtitles and a Czech myth reimagined on a grand scale... Photo credit: NdB. Drama Brno, Oct 5 (BD) - Autumn is truly with us, and this month English speaking theatregoers can enjoy three screen-to-stage adaptations with English subtitles. Two plays with English subtitles are showing in October...Lee AdamsLee Adamsleerobertadams@hotmail.co.ukAuthorA writer, film critic and father of two who has called Brno home for ten years.Brno Daily

Brno, Culture, Events in Brno, Theatre, Things To Do in Brno

A writer, film critic and father of two who has called Brno home for ten years.
View all posts by Lee Adams →

« In Photos: Hotel Avion on Česká Opens for Brno Design Days
Historical Tram and Trolleybus in Operation for One More Weekend »