Brno, Nov 8 (BD) – BEST divadlo draws extensively from Brno’s ex-pat community for both its audience and its members. The show will run 11, 12, 13, 17 and 19 November at Kabinet Múz, Sukova 39. Ticket reservations can be made at BESTdivadlo@gmail.com. The production is supported by a generous gift from the Mayor’s office of Brno.

Sexual Perversity in Chicago is about the occasionally difficult process of dating and commitment between 20-something men and women. The show is being directed by Tereza Turzíkova, a theater theorist, critic and current BA student in Masaryk’s Theatre Studies program. She talks here about her perspective on the play, her own aesthetic and the range of theatre genres with which she has been involved:

Tereza, can you talk a bit about what some of your early influences in theatre and the arts were?

I believe that the artistic works that I encountered in my early teens directly defined what you could call my taste in art, and indirectly perhaps even my career choices and other interests. I have never paid much attention to distinguishing between different fields of art, so it was a cluster of European cinema (Tarkovskij, Pasolini, Bergman, von Trier), avant-garde in fine arts and literature and operatic works of the 20th Century. In theater, the biggest influence were the thoughts of Antonin Artaud, John Cage, Allan Kaprow, and In-Yer-Face drama.

“If we go back to when I was 14, 15, I was listening to opera on daily basis and going to opera performances as much as possible.” 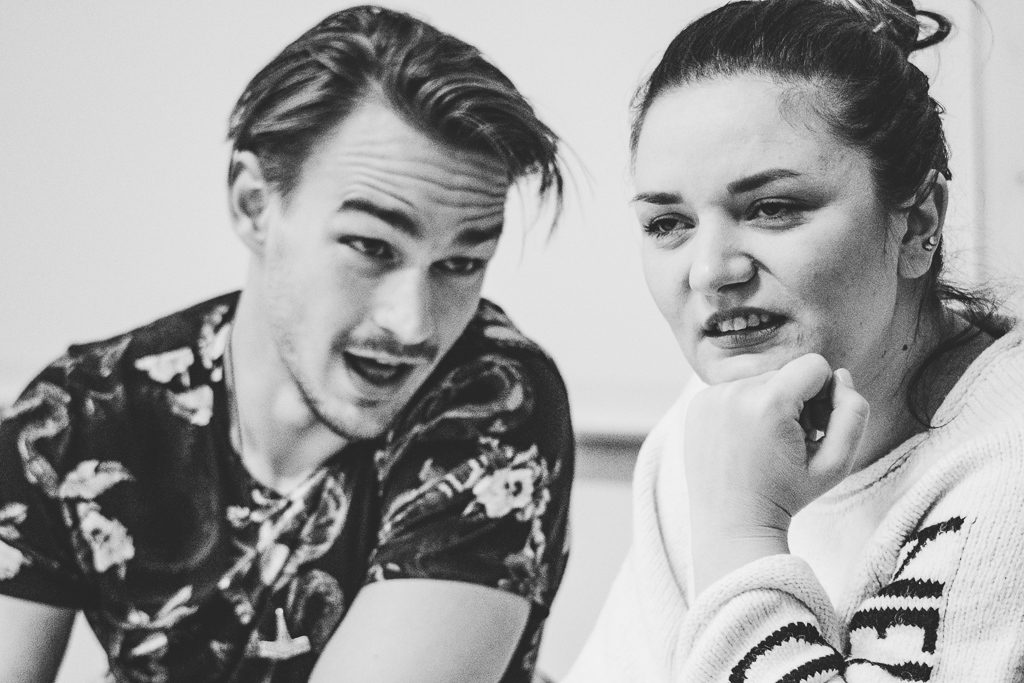 What other factors –individuals or experiences– sparked your earliest interest in theatre?

Before I realized that my greatest interest lies in being a theoretician, for a long time I aspired to be an operatic stage director. If we go back to when I was 14, 15, I was listening to opera on daily basis and going to opera performances as much as possible. The amount of emotion, sensory value and magic of suspending disbelief shaped my thinking about art and to great extent, even my approach to staging this production of Sexual Perversity in Chicago. 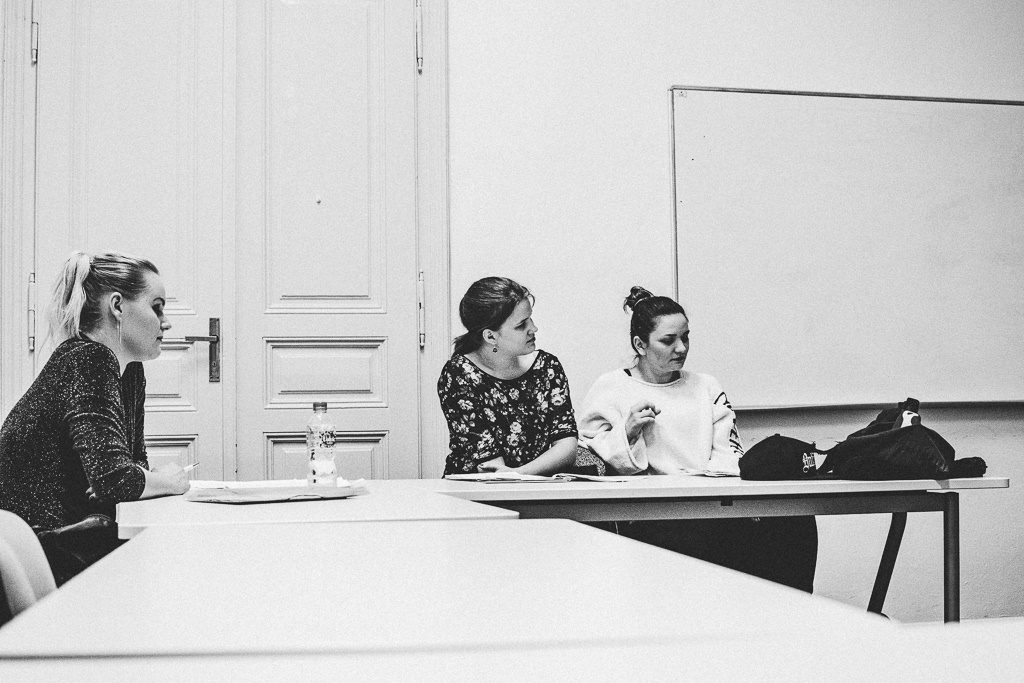 What theatres in town interest you? Can you share some particular productions that have impressed you?

Brno has a very diverse theatrical scene and I do believe that everyone can find whatever they are looking for in art. For me, HaDivadlo in Alfa Pasáž works with very interesting dramaturgy that connects to the issues of today’s private and global life and I watch their work very closely. Their production of Náměsíčníci (Hermann Broch) was one of the most ambitious things I have seen in Brno. When it comes to politically engaged theater, Divadlo Feste (in Industra) produces thought-provoking and formally innovative shows. I’m also currently working on a thesis about D’Epog which is a performative platform operating in non-theatrical spaces.

“I cannot judge Brno from the perspective of someone with a full-time job and a family, but for a fan of art, it might be just about ideal.”

Do you have any observations about Brno as a place to live and work?

As someone who travels quite a lot, I always love coming back to Brno because the city has so many things to offer that I often miss when I’m abroad, be it cheap and delicious coffee or a diverse and alternative cultural scene. I cannot judge Brno from the perspective of someone with a full-time job and a family, but for a fan of art, it might be just about ideal. Lately, there’s been an increase of foreign students and expats moving in which makes Brno even more lively and culturally diverse.

Talk about your degree program at Masaryk and your career plans.

I am currently a student of Theater Studies on the Faculty of Arts at Masaryk University. The program consists of two main fields – theater history and theater theory. Overall, I am more focused on theory and its development over the few last decades. I‘m interested in the relationship between continental philosophy and theater studies, and the plan so far is to examine this relationship further here at Masaryk University, even as a doctoral student. The University gives me a lot of opportunities to travel abroad for international academic conferences. For example, I recently had the chance to speak at La Sorbonne in France and at an international festival in Vilnius, Lithuania.

“In the context of the recent discourse regarding sexuality, rape and the #metoo movement, many of the situations and dialogues of the play resemble exactly what society is dealing with (and trying to change and subvert) now.”

How about your thoughts on American theatre, especially Mamet? Do you think the play has a cultural relevance to the contemporary Czech Republic?

For a long time, David Mamet was not an author that interested me. After getting involved with Sexual Perversity in Chicago, I went through some of his other works. Surprisingly even his more recent didn’t strike me as having the same poignance and relevance to today’s world as Sexual Perversity does. In the context of the recent discourse regarding sexuality, rape and the #metoo movement, many of the situations and dialogues of the play resemble exactly what society is dealing with (and trying to change and subvert) now. This, of course, is one of the key elements that we would like to stress in our production. However, we tried to avoid any kind preaching to the audience and rather hope to offer a comic –and sometimes frustrating view of those problems in male-female relationships.

How did you learn about BEST divadlo and what are your thoughts on working with the company?

I went to see one of the early performances of November and when I got the chance to work with an English-speaking theater full of young and dedicated actors on a project that interests me for many reasons, I was very excited. Although we had about only 4 weeks to rehearse the whole show, the amount of energy that was put into it not only by the actors but by the whole production team and everyone involved was something absolutely remarkable. 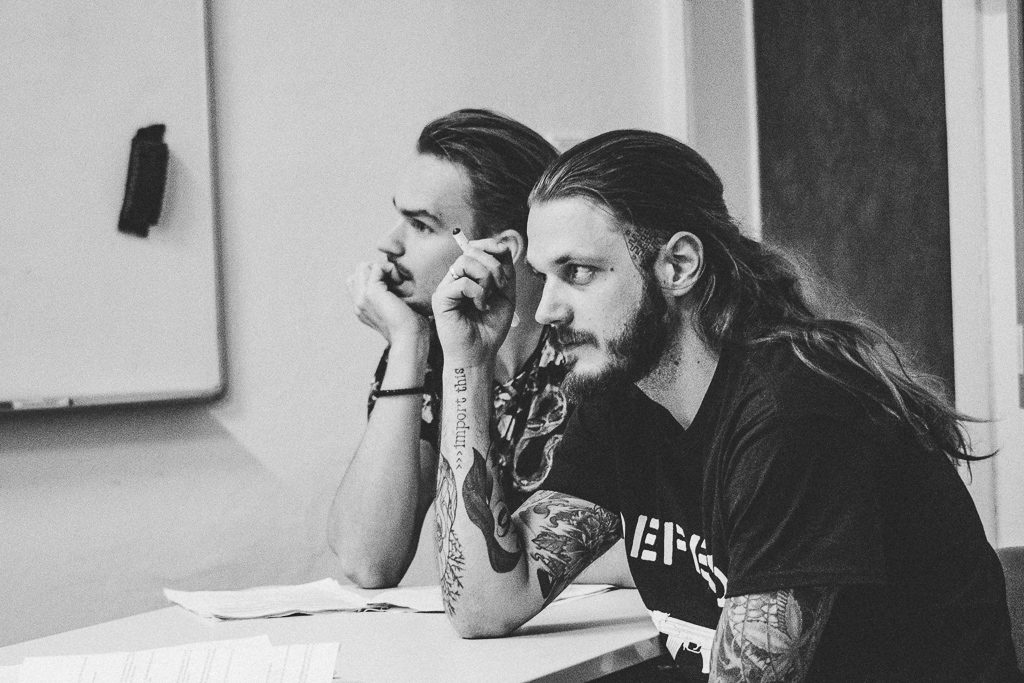 What are your impressions about the kind of contributions that a group like BEST divadlo could make to the community and region? The timing of its appearance on the scene and chances for success?

With so many expats living in Brno, we can already note the increase in the amount of English-speaking or multilingual events happening here. In order to really build a functional community within the social landscape of the city, creating meeting spaces and cultural events is an inevitable and beneficial process. In that regard, BEST divadlo is doing a great job with introducing English-speaking theatre to both ex-pat and Czech audiences as well as creating a venue for social exchange within the local community. I especially look for BEST divadlo now in its second season to really find its audience and build a strong dramaturgical concept that will contribute to the blooming cultural scene we have here.