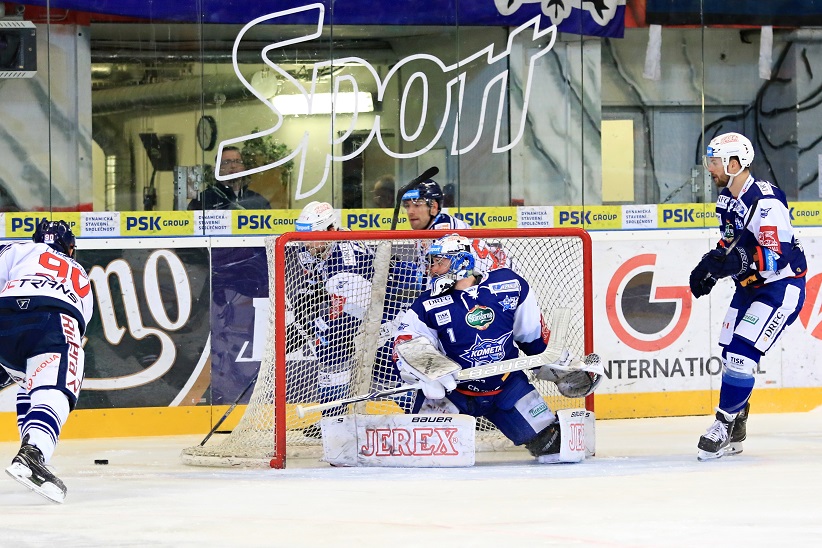 One reason people watch sports is because you never know what is going to happen. It’s not a scripted television show; it’s a live competitive event with highly skilled athletes.

On Tuesday, in Prague, just such an out-of-the-blue moment happened, and it helped HC Kometa snap a three-game losing streak with a 1-4 victory against Sparta Praha.

Perhaps, it could even be the catalyst for a third consecutive title run.

Midway through the third period, Martin Erat won a face off, tapped the puck to the side and knocked it three-quarters of the length of the rink into an empty goal. It was a shorthanded goal — three Kometa players were facing off against six Spartans.

It is the kind of goal that is remember and that, maybe, will be looked back upon as the moment eveything changed in a lackluster middle-of-the-regular-season. Brno, the two-time defending champion, is sixth in the standings with a month and a half left in the regular season. They have 62 points, 10 behind league-leader Třinec.

The momentum can continue with two home games this weekend: Zlín comes to town on Sunday at 5 p.m. and Chomutov arrives on Tuesday at 6.

Last week, Kometa reprised their Kometa Express on Friday, this time bringing thousands of fans to Ostrava by rail. Though they boosted the attendance to 9,539, they lost to HC Vítkovice Ridera, 4-1.

Ivan Baranka, a Slovak international, scored the only goal. It was his first goal in his third game for Brno. Previously, he played for the Slovak national team, including on three Olympic teams, in several places in Russia’s KHL and, for the past two season, for Vítkovice.

Žabiny Brno were eliminated from the Czech Cup when they lost a heartbreaker at home to Sokol Nilfisk H. Králové. Then they added Kateřina Zohnová, a member of the Czech national team at the 2012 London Olympics, and beat Loko Trutnov, 61-89, in a league game.

KP Brno and Žabiny Brno have both added players to strengthen their rosters. The teams will finally meet for the first time this season on Feb. 6.

Against Trutnov, Zohnová scored 11 points in her Žabiny debut to help leading-scorer Marques Webb, who was 8-for-8 from the field and totaled 19 points.

Zohnová, a 34-year-old wing, has played in Poland, Greece, Israel, France and Italy. Last season, she was in Piešťany, Slovakia.

Basket Brno Fighting For Group A1

After a modest two-game winning streak was ended at home by the undefeated league leaders,

egoé Basket Brno is still in a decent position to advance into the top bracket of the Koopertiva NBL for the remainder of the season.

Brno (7-13), which lost to ČEZ Basketball Nymburk, 70-91, is tied with USK Praha (7-13), which just beat Opava, in eighth place with two games left in the regular season. Only the top eight teams will advance into Group A1, which guarantees another year in the league.

Brno may have the lighter remaining schedule. They travel to Ústí nad Labem (11-9) on Saturday and close out the season at home with last-place Kingspan Královští sokoli (2-17) on Feb. 2 at 6 p.m.

USK Praha plays at 11th-place Kolin (5-15) and hosts Nymburk on the final weekend of the regular season.

NH Ostrava (6-12) has two games in hand, and could also challenge for the right to the top group.

Group A1 would guarantee that Brno would stay in the Kooperative NBL next season and it would also provide a competitive schedule, with home and away games against the seven teams above them in the standings. Only three of Brno’s seven wins were against these top teams during the first part of season. The bottom four teams go into Group A2.

Against ČEZ Basketball Nymburk on Saturday, Brno were competitive throughout, but couldn’t get closer than 10 points against the perennial champions.

“In general, I am satisfied because my players fought until the end,“ said Brno head coach Christianos Chougkaz. “It was not easy to play against a better team when we gave them 23 offensive rebounds. But I saw that my players believed in themselves and believed in the team.”

Deremy Geiger was 6 of 9 from both 2-point range and 3-point range for a season-high 30 points. Reggie Keely added 18 points and nine rebounds.

“I hope that we can get one more win and play in the first group after this regular season,” Chougkaz said.

A connoisseur of the unpredictable and unscripted drama of sports.
View all posts by Bruno Zalubil →
« Four Ensembles from Abroad and from Other Czech Cities Take to the Ballet NdB Stage in January and February
New Brno City Council Confirms Support for New Railway Station »