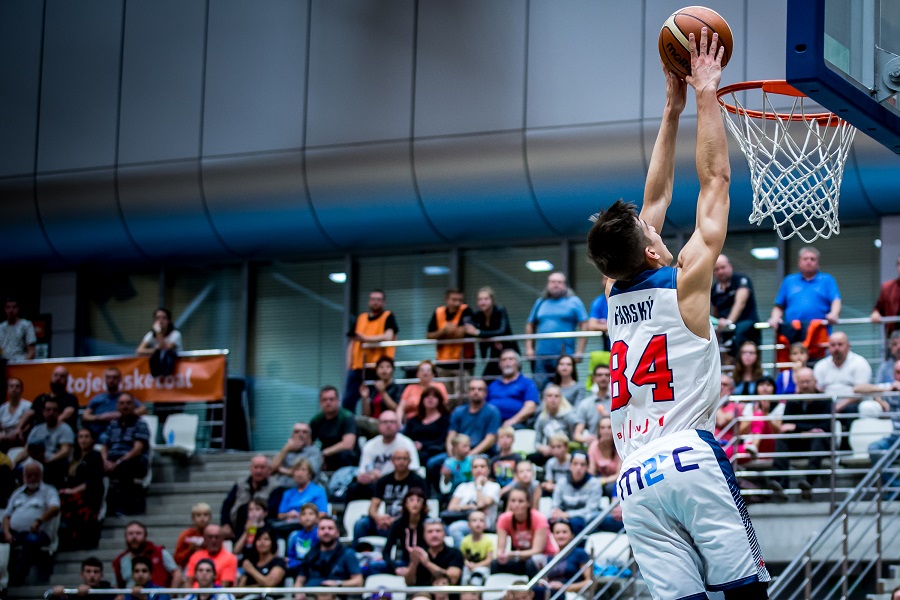 Radek Farský, 19, is one of the young players who have helped Basket Brno to three straight wins. They host Sluneta Ústí nad Labem at 7 p.m. on Saturday. Photo credit: Jan Russnak.

Žabiny Brno, who finished third in the CEWL Final Four, return to play in the domestic league when they host Teamstore Brno tonight (Wednesday) at 6 p.m. and travel to Kralove Pole to play KP Brno in the final game of the ZBL regular season at 3:30 p.m. on Saturday.

The top eight teams will advanced into the the Playoffs, where they will play a loser-out best-of-five quarterfinal series. Both KP Brno and Žabiny Brno will advance into the postseason.

Teamstore Brno (1-17) is at the bottom of the standings. They host U19 Chance (1-18) on Sunday at 5 p.m. Then they will play in the Play-Out bracket with the threat of regulation to a lower league.

KP Brno beat Žabiny Brno by three points three weeks ago. The teams have a rivalry that begin a long time ago. Last year, KP Brno finished the regular season in third place with an 18-5 record and sixth-place Žabiny Brno was 14-8. The two teams met in the quarterfinals and KP Brno won all three games, which was a rematch of the KP Brno sweep in the previous year’s quarterfinal series.

Host Žabiny Brno finished third in the Final Four of the Central Europe Women’s League this weekend when they lost to eventual-champion Piešťanské Čajky, 60-67, in the semi-finals and beat Young Angels Kosice, 75-51, in the consolation final.

Post Marques Webb did not play in either game, so a lot was put on the shoulders of Lithuanian Justina Matuzonyté. She led the team in minutes and, on Saturday against Piešťanské Čajky, with 15 points. Then she added another 10 against Kosice. She a total of 11 times, yet scored only nine points from the free-throw line. Her defense was key, particularly against Piešťanské Čajky because she limited their leading-scorer Jessica Lubin to only six points, well below her and also held Rebeka Mikulasikova to six points.

The bench was a key to the consolation final victory. Kateřina Zohnová had 14, Nikola Dudášová had 14 and Natálie Stoupalová had 10 to help outscore the starters 46-29.

egoé Basket Brno will take a three-game winning streak into their home game against Sluneta Ústí nad Labem on Saturday at 7 p.m.

The league has rested for two weeks and Brno (10-14) has a shot at moving up to seventh in the standings. Sluneta Ústí nad Labem (15-9) is third in the league, behind ČEZ Basketball Nymburk (23-0) and second-place DEKSTONE Tuři Svitavy (16-8).

Brno’s last loss was to Ústí nad Labem on Jan. 26 in the penultimate game of the regular season. They have since earned their way into Group A1, where they have won both games.

Deremy Geiger leads the team with 17.2 points per game. He is fourth in the league standings.

Martin Erat was suspended for six games for an excessively aggressive hit, but HC Kometa won two games to stay in prime position to advance directly to the quarterfinals of the Tipsport .

Brno won two road games — 0-3 at Karlovy Vary on Friday and 3-4 at Litvínov on Sunday — to stay in fifth place with 80 points. Třinec is in fourth place with 87 points and a game in hand.

Kometa, the two-time defending champions, play three games this week: at home against sixth-place Vítkovice (78 points) on Friday; at league-leading Liberec (97) on Sunday; and at home against Sparta (68) on Tuesday. They finish the regular season at Zlín (71) on March 8.

Erat was thrown out of the game against Karlovy Vary when he aggressively struck Tomáš Havránek in the middle of the second period. In a press release from the Disciplinary Commission, Viktor Ujčík, the chairman, said the contact was “without any effort to play the puck with the sole aim of hitting the opponent.”

Erat was suspended for the remaining five games of the regular season and the first game of the postseason.

Havránek, a young player on loan to Karlovy Vary by HC Kometa, suffered a concussion and stayed in the hospital overnight.

Erat, 37, is a former NHL player and captain of the Czech national team. He rested most of this season to be sharp for the postseason. In 18 games, he has 17 points from three goals and 14 assists.

If form holds, Kometa will play in the quarterfinals against HC Oceláři Třinec.

FC Zbrojovka Brno has gone 8-1-1 since the end of the autumn half of the Fortuna:Národní Liga. The impressive record is, admittedly, during the winter Tipsport League and preparation games where the competition is not at its peak and coaches are tinkering with personnel and strategies — but, a win is a win is a win, and, for a team in the second biggest city in the country that is currently in the middle of the second-league standings, building confidence can only help.

FC Zbrojovka starts the spring season on the road this Saturday at Chrudim at 10:15 a.m.

The first home game of the season is against Žižkov on Sunday, March 10 at 6 p.m.

The highlight of the winter season was when Zbrojovka defended its Tipsport League title, beating Slovan Bratislava, 3-0, in Malta on Jan. 21.

The team has gone through significant changes. Four big-name players did not have their contracts renewed: Goalkeeper and captain Dušan Melichárek is now at Malmö (Sweden); defender Chico Gomes is now at Amora FC (Portugal); striker Musefiu Ashiru is now at Trnava (Slovakia); and longtime Brno native Milan Lutonský is now at Prostějov.

Pavel Halouska, a 23-year-old who has cut his teeth in the organization, has been playing well in the goal throughout the winter. Damián Bariš, 24, and Robert Bartolomeu, 25, have both scored multiple goals during the past two months.

At 36, Lukáš Magera is the oldest member of the team. He scored in the first six games of the regular season and ended the autumn half with nine goals and an assist. He is one goal off of the league lead.

A connoisseur of the unpredictable and unscripted drama of sports.
View all posts by Bruno Zalubil →
« Brno’s Public Transport to Celebrate its 150th Anniversary with Numerous Events in 2019
Open Day: International School Of Brno Invites Prospective High School Students And Their Families »