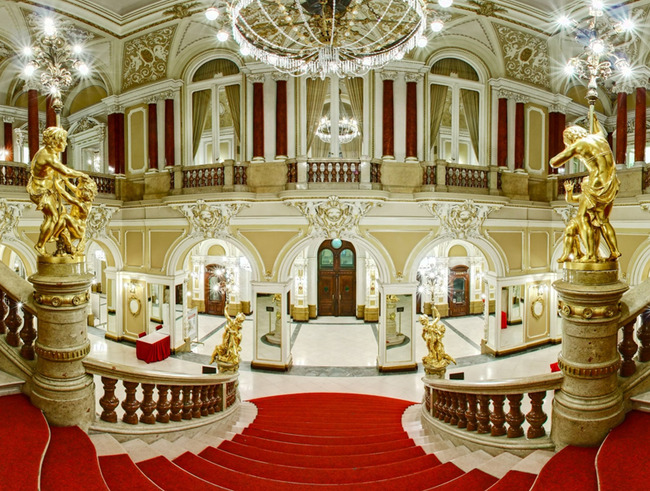 Brno, March 16 (BD) – “Our ensembles lived and thrived last year,” evaluated the last year Martin Glaser, Head of NdB at the press conference last week. Last year marked, according to its management, a success – notwithstanding the complications due to the long-lasting renovation of Janacek Theater. NdB organized four major international festivals with a budget over CZK 82 million. The largest and probably most-renowned of them – Janacek Brno 2018 – has been nominated in International Opera Awards, considered “Opera Oscars”, in the category of “Best Festival”.

“The nomination is a huge success, even if we won’t win. NdB has been the only theater nominated in this prestigious award from the entire former ‘Eastern bloc,” Glaser explained.

According to Glaser, it is important that “all houses of NdB have been including both classic and modern pieces in their programs.”

In the ongoing season, Ballet of the National Theater in Brno has introduced two masterpieces of all time dance performances, Swan Lake and Romeo and Juliet. Another classic ballet will open the 2019/2020 season – La Bayadère, in English known as The Temple Dancer. Ludwig Minkus’s ballet was first presented by the Imperial Ballet at the Bolshoi Theatre in Russian St. Petersburg.

“La Dame aux Camélias”, another 2019/2020 premiere, is undoubtedly one of the most famous love stories of modern literature, which inspired the emergence of further adaptations of many artistic genres, such as Verdi’s Traviata opera or many film productions. The NdB ballet invited the prominent Croatian choreographer Valentina Turcu. According to Mário Radačovský, head of NdB ballet, Turcu has fantastic choreographic dance skills and a unique style that she will bring to Brno dance scene.

The last planned ballet premier of the next season is an original dance show, “Radio and Juliet” on a Shakespeare theme with the music of the rock band Radiohead of Edward Clug.

The director duo Martin Kukučka and Lukáš Trpišovský, known as SKUTR, belong to the creators who have gained a reputation for their imaginative productions. SKUTR will launch the 2019/2020 opera season with the production of the famous opera piece about the eternal search for the female ideal, “Hoffmann’s Stories” by Jacques Offenbach.

Other premieres of the season include works of the 20th and 21st centuries. After thirty-five years, “Der Rosenkavalier”, the comic opera of Richard Strauss will return to Janáček Theater.

With the author of the music Marko Ivanović, and author of the libretto and director David Radok, an original opera “Monument” that was written for NdB will continue the season.

In the 2019/2020 season, when we celebrate 130 years since the birth of world-famous Czech author Bohuslav Martinů, NdB will introduce the opera “The Greek Passion”. The deep humanist message of the composer, has already been heard here once – at its Czechoslovak premiere.

The end of the season belongs to the children with popular Czech fairy tail “Ferda Mravenec” of Ondřej Sekora.

“NdB’s drama operates in two theaters – we will be glad if you look for it as such without the preference of one of the buildings. We, too, are equally fond of both theaters and care for them with equal effort,” Milan Šotek, the Head of Drama at NdB expressed the wish to unite the drama production.

The unified visual will contribute to their integration: “We invited the legendary Czech photographer Jindřich Štreit to cooperate on posters for individual premieres of the 2019/2020 season,” Šotek gave away.

When asked by Brno Daily about internationally-accessible plays, Šotek explained that the theater wants to pay more attention to improving the quality of translation from other languages in Czech, and to the English subtitles that accompany selected plays.

The upcoming season at Mahen Theater and Reduta will offer the best of modern and classic productions. Brno spectators can look forward to elaborated commedie dell’arte of Carlo Goldoni “Mirandolina” (Reduta); and the unsettling “Quills” by Texas-born playwright Doug Wright, which narrates the story of infamous Marquis de Sade – known to be a twisted pervert, who was one of the greatest thinkers of his time, but then spends the end of his life in a mental institution against his will (Mahen Theater). Many will remember the film adaptation from 2000 directed by Philip Kaufman.

Among the classic pieces, we will find one of the most often played shows in the Czech Republic, the fairy-tale based drama  “Lucerna” on a theme of writer Alois Jirásek (Mahen Theater).

The Italian “Straw Hat”, an internationally loved comedy by Eugène Labiche and Marc-Michel, will close the season at Mahen theater.

Brno Daily - English News and Events in Brno.
View all posts by BD Staff →
« Video: The Day Hitler Came To Brno
Smile and Shine From the Inside Out with DUO SMILE »