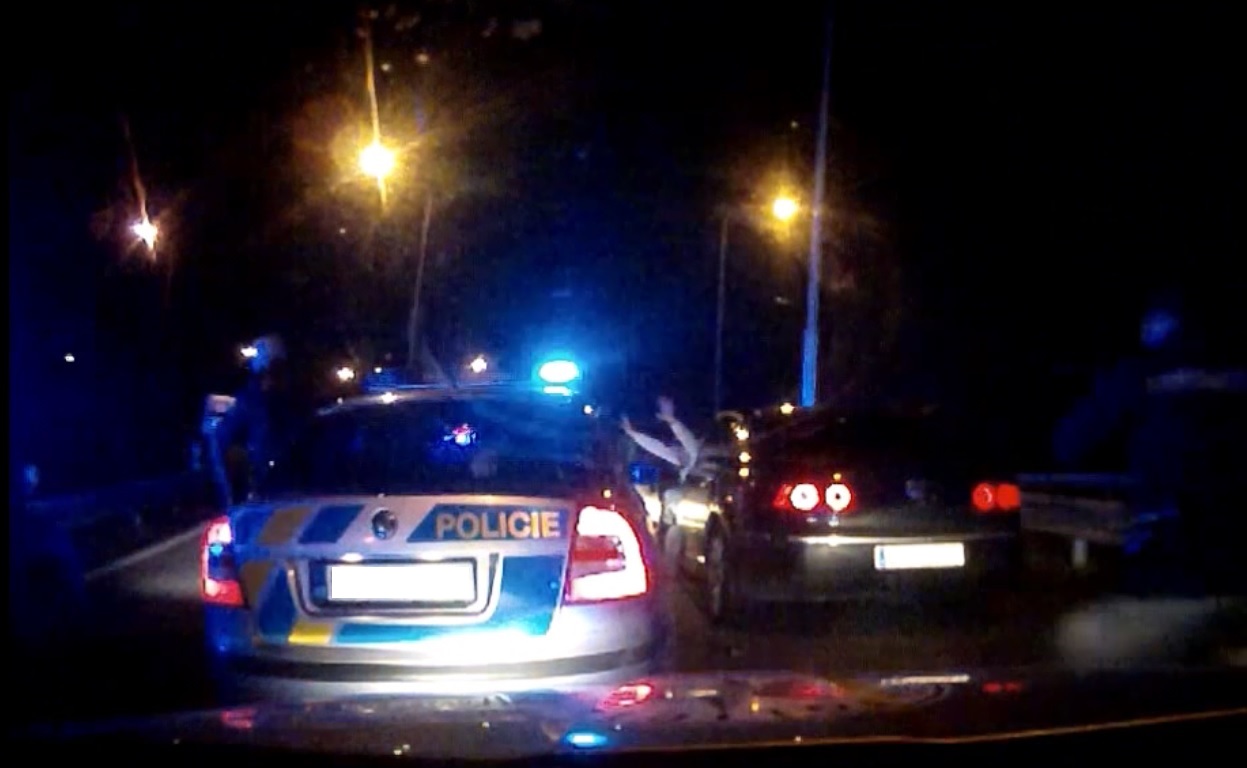 On Tuesday night, the police chased a car that is being searched for in the entire Schengen area. Photo: Czech Police.

Brno, Mar 22 (BD) – The Alien Police patrol was driving through Křenová, when its attention was caught by a vehicle with dark tinted glass, and an Austrian license plate. When the police searched for the vehicle details, they found out that the vehicle was wanted, and being searched for throughout the Schengen area.

“The vehicle was a Volkswagen, but the registration of the license plate was for a Mercedes. The police tried to stop the vehicle, but the driver did not respond to the patrol’s orders,” Petra Hrůzová spokesperson of South Moravian Police described.

“The vehicle rushed through the city center with aggressive and fast driving, and more patrols involved in the pursuit,” Hrůzová added.

According to Hrůzová, at Rooseveltova in the centre of Brno, the driver hit traffic signs, and people walking on sidewalks had to dodge the vehicle; not even a roadblock of police cars was able to stop him. The driver tried to escape from the police patrols, and made his way towards the highway via Zvonařka and Hněvkovského Street. The car entered the D2 highway in counter direction and was finally stopped by several shots of police before continuing at the D1 highway.

During the pursuit, a passenger threw a gun out of the car, which was covered in a towel. At the end of the chase, when the vehicle was searched, the police found more weapons, cartridges, and more license plates.

The car had five non-Czech nationals in it: four passengers and the driver. The driver tested positive for being under the influence of drugs and narcotics.

“The case is still under investigation, and the prosecutor has filed a custody proposal for all five suspects,” commented Hrůzová.

https://www.brnodaily.com/2019/03/22/news/video-car-chase-ended-after-shooting-in-brno/https://www.brnodaily.com/wp-content/uploads/2019/03/brno-car-chase-police-video-1024x631.jpghttps://www.brnodaily.com/wp-content/uploads/2019/03/brno-car-chase-police-video-150x92.jpg2019-03-22T13:26:00+01:00Anjanette Jianna UmaliCzech Republic / WorldBrno,Crime,Czech Republic,NewsOn Tuesday night, the police chased a car that is being searched for in the entire Schengen area. Photo: Czech Police.Brno, Mar 22 (BD) - The Alien Police patrol was driving through Křenová, when its attention was caught by a vehicle with dark tinted glass, and an Austrian...Anjanette Jianna UmaliAnjanette Jianna Umaliajumali17@gmail.comAuthorA part-time editor for Brno Daily and a student of International Relations and European Politics, pursuing my interests in current events, culture, and all fun things.Brno Daily

A part-time editor for Brno Daily and a student of International Relations and European Politics, pursuing my interests in current events, culture, and all fun things.
View all posts by Anjanette Jianna Umali →
« City of Brno and Czech Academy of Sciences Sign Land Exchange Deal To Help Save Vila Arnold
Kino Art Celebrates 100 Years Since Opening »