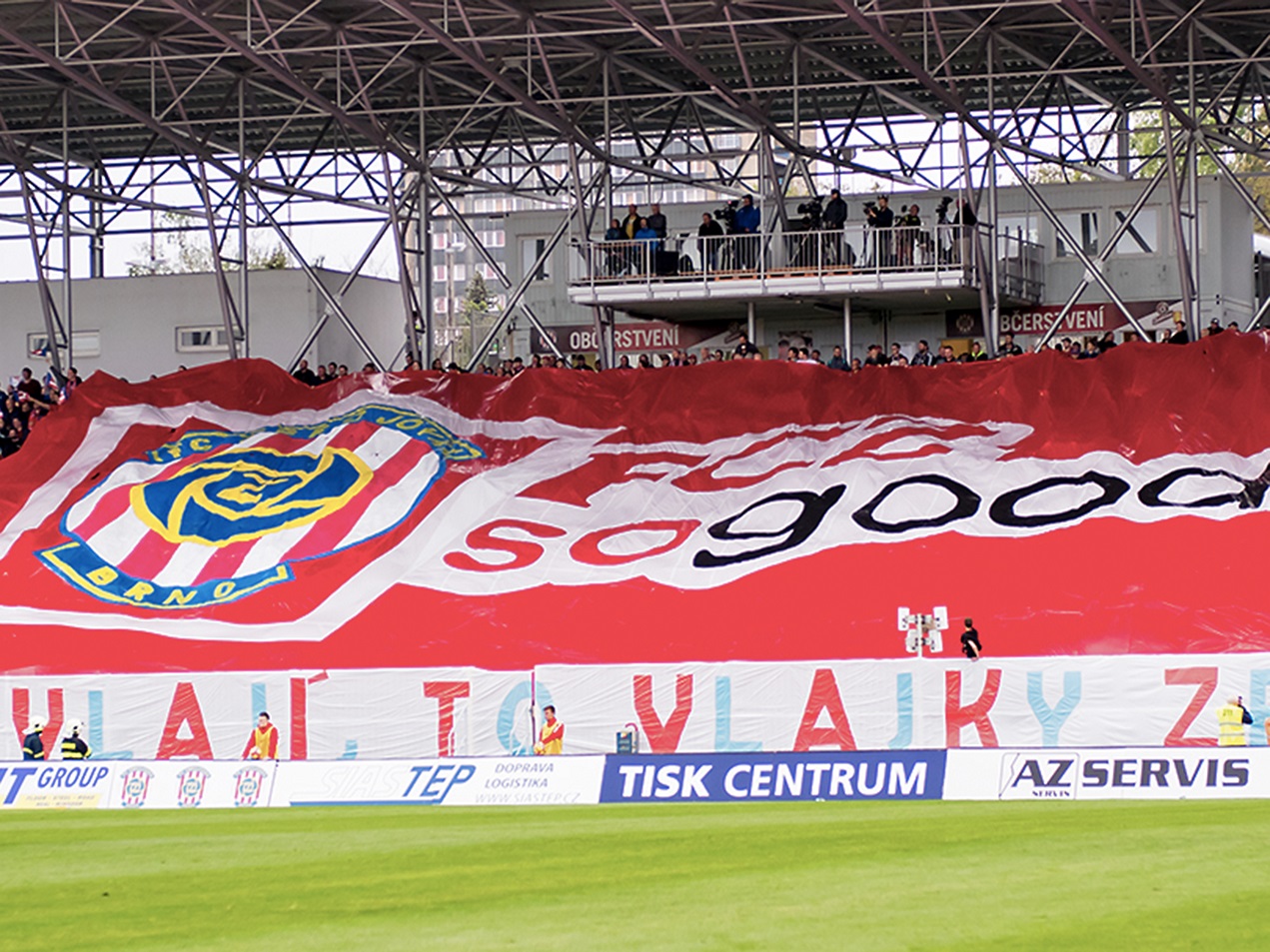 The fans contribute much to the energy of local football games. Every point will count as FC Zborjovka hosts Znojmo Sunday and third-place FC Hradec Králové on May 7. Photo credit: FC Zbrojovka.

FC Zbrojovka briefly moved into the all-important third spot in the Fortuna:Narodni Liga standings when it beat Pardubice, 3-1, at home on Wednesday. But, with a perfect opportunity to solidify their right to a chance at promotion to the Fortuna:Liga, Brno lost at Varnsdorf, 2-0, on Sunday.

Zbrojovka is 11-6-7 with 39 points and in fifth place, three points behind third-place FC Hradec Králové (12-6-6, 42) and two points behind fourth-place FK Varnsdorf (11-8-5, 41 points). Third place would offer a chance to advance; fourth place means a second year in the second league.

This Sunday, Zbrojovka hosts its southern neighbor, Znojmo, for a 6 p.m. start. There are only six games left in the season.

The following home game will be a big one: FC Hradec Králové comes to Brno on May 7 for a Tuesday game that will be shown on ČT Sport television. Kick off is at 5 p.m.

After a second-half onslaught of goals against FC Hradec Králové put FC Lokomotiva-Horni Herspice solidly into seventh place in the top women’s football league of the Czech Republic, the team from south Brno could not break into the top 4 when they lost, 2-1, at 1. FC Slovácko last Friday.

The Moravian Derby — which drew the league’s best attendance of 723 — was exciting through to the end because Horni Herspice had beaten Slovacko with a dramatic come-from-behind effort to advance in the Czech Women’s Football Cup in February.

This time, Nikol Mazúchová put Lokomotiva on the board in the 14th minute, but Slovácko scored at 30 minutes and 90 minutes. A late spurt of Horni Herspice offense was not enough.

Lokomotiva, which beat FC Hradec Králové, 5-1, behind four goals by Desana Dianišková on April 13, was just a win from fourth place when they traveled to Uherske Hradiste for the Friday evening game in the town’s main stadium. They finished the 14-round regular season with a record of 3-3-8 with 12 points. Slovácko (5-1-7, 16) moved up to fourth place.

Žabiny Brno Have Backs Against the Wall in Finals

The Žabiny Brno women’s basketball team made it to the Finals of the ŽBL and ran into the brick wall that is undefeated and multiple-time-defending-champion ZVVZ USK Praha.

Game 3 is today (Wednesday) in Prague. If necessary, Game 4 would be in Brno on Saturday and Game 5 would be in Prague on May 1.

The Žabiny are back in the Finals for the first time since 2013-14.

Hradec Králové finished the series in Game 4 at home, 70-60, on Friday.

Given the dominance that the Brno Draci have shown the Czech extraliga over the past two decades, it is not surprising when they win. It is, however, newsworthy when they lose — even when it is an early season game that probably doesn’t mean a whole lot in the long run (and was quickly forgotten with victories in the following two games.)

Nevertheless, on Friday, the Draci gave up a run on a wild pitch in the top of the eighth inning and failed to capitalize on 10 hits as they lost at home, 0-1, to Eagles Praha. It was an unfortunate turn, given that they had just temporarily wiggled out of a bases-loaded-with-no-outs jam with a double play that started at home plate.

After a month of play, the Draci are atop the league standings with an 11-1 record. Arrows Ostrava are a game back at 10-2. Eagles Praha are at 5-7.

Cardion Hroši Brno dropped three games to Ostrava last weekend to fall to 6-6. Technika logged its second win of the season — 8-4 at Třebíč Nuclears on Friday — but they are last in the league with a 2-10 record.

The Brno Sígrs squandered a lead late in their first game of the year, but they got some redemption when they caught the Pardubice Stallions on Easter Sunday with two touchdowns within the final minute to win 48-47.

Both TDs were Wesley Geisler passes to Ivan Baykalov: a 14-yard pass with 38 seconds left and a 17-yard pass with no time on the clock. Importantly, Jiří Hrůza converted both extra points.

The Sígrs, who allowed the visiting Vysočina Gladiators 22 unanswered points in a 49-50 loss on April 14, are 1-1 with 97 points scored and 97 points allowed. They are nothing if not exciting.

They travel to play the Prague Lions on Sunday at 2 p.m. The Lions, who are 3-0, have scored 97 points through three games.

The other Brno team, the Alligators, continue to pursue their first win of the season. They lost to the visiting Lions, 28-42, on Saturday and dropped to 0-3, the only team in the eight-team league without a win. The Alligators play at the Vysočina Gladiators (2-0) on Saturday.

The Czech Cricket League begins this Saturday when the Brno Cricket Club travels to the Czech capital to play defending-champion Prague CC.

The Opening Round game of the Czech T20 summer league begins at Chateau Field, Vinor, at 3 p.m.

Brno was the runner-up in 2018. The opening match is expected to attract executives of the International Cricket Council and the Indian Ambassador to the Czech Republic.

The first home game will bring Vinohrady Cricket Club to Brno on May 11.

A connoisseur of the unpredictable and unscripted drama of sports.
View all posts by Bruno Zalubil →
« Previously Inaccesible Part of Capuchin Terraces Opened in a Ceremony on Tuesday Afternoon
Video: Suicidal Man Saved by Czech Police in Brno »