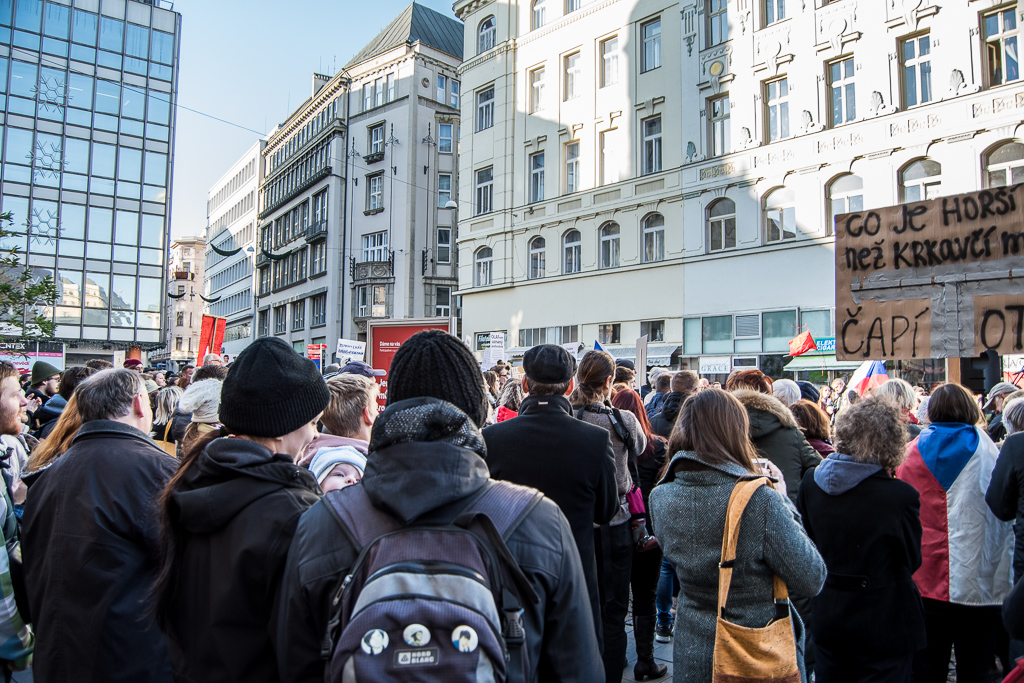 Tonight, the political protests against the latest steps of current government are organized at 99 squares of the cities and towns across the country. According to the activists, the new minister of justice is not impartial and can influence the legal process against Babiš. In Brno, demonstrators will gather at Zelný trh and march through the city. Photo: Protesters from a demonstration organized by Million Moments for Democracy (Milion chvilek pro demokracii) and Together Brno (Společně Brno), from autumn 2018. Credit: Casadei Graphics.

Brno, Apr 29 (BD) –  A day before the appointment of new ministers (together with the Minister of Justice, the new Ministers of Industry and Commerce, and of Transport), protests are organized throughout the Czech Republic – with some of the biggest protests planned to be in Brno, Prague, Olomouc, and other Czech cities and towns.

Recently, the police proposed to charge the Prime Minister, Andrej Babiš – who is being accused of fraud, and misusing the EU funds. Shortly after the charges were announced, Babiš motioned for a change: to replace the current Minister of Justice, Jan Kněžínek. The intended replacement is Marie Benešová, who used to be the Minister of Justice between 2013 and 2014 as a part of Jiří Rusnok’s Cabinet – which was appointed by President Miloš Zeman, and operated in caretaker capacity.

Benešová is also known to be a long-time friend of President Zeman. According to the activists of Milion chvilek, the new Minister of Justice is not impartial and will influence the legal process against Babiš.

These protests are sparked by more developments in the so-called Stork’s Nest (Čapí hnízdo) affair. A similar protest was organized in November 2018, and was covered in our previous story: “November 17 in Photos: Brno Witnessed Memorial Events and a Protest against the Prime Minister“.

In Brno, the protests are being organized by South-Moravian volunteer association “Together Brno” and the country-wide political movement “A Million Moments for Democracy”. The demonstrators will be meeting at Zelný trh, and will march throughout the city center to support the movement. Over 6,500 people have showed their interest on social media to join the protest in Brno.

https://www.brnodaily.com/2019/04/29/news/politics/demonstrations-planned-tonight-in-czechia-against-the-governments-change-in-minister-of-justice/https://www.brnodaily.com/wp-content/uploads/2018/11/Political-protests-against-Babis-Brno-November-17-2018-29-1024x683.jpghttps://www.brnodaily.com/wp-content/uploads/2018/11/Political-protests-against-Babis-Brno-November-17-2018-29-150x100.jpg2019-04-29T12:47:22+02:00Anjanette Jianna UmaliPoliticsBrno,Czech Republic,EU,News,PoliticsTonight, the political protests against the latest steps of current government are organized at 99 squares of the cities and towns across the country. According to the activists, the new minister of justice is not impartial and can influence the legal process against Babiš. In Brno, demonstrators will gather...Anjanette Jianna UmaliAnjanette Jianna Umaliajumali17@gmail.comAuthorA part-time editor for Brno Daily and a student of International Relations and European Politics, pursuing my interests in current events, culture, and all fun things.Brno Daily