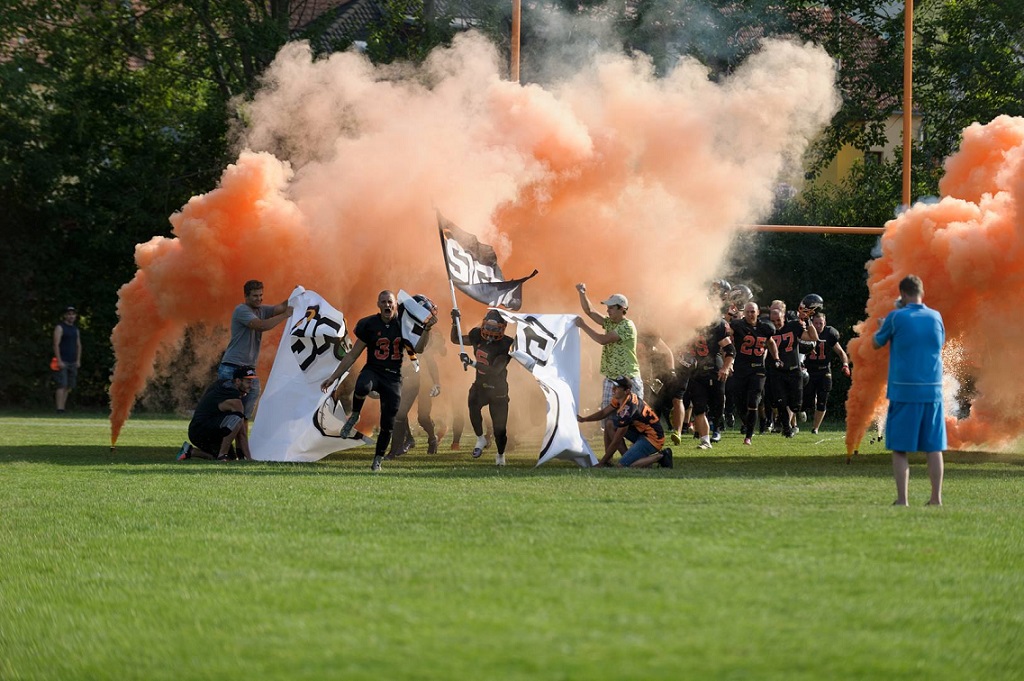 Every year the rivalry between the Alligators and the Sígrs adds another layer of history and drama. The Sígrs have the upper hand for now. Photo credit: CAAF.

Leave work early. Brave the traffic. Delay your trip out of town. It’s time: Are you ready for some football?

The Brno Alligators will host the Brno Sígrs at their shared home field in Bystrc. The game is Friday at 5 p.m.

Neither team is entering the rivalry game with a lot of momentum. The Alligators lost at the Vysočina Gladiators, 43-7, on Saturday. The Sígrs were beaten in Prague by the Lions, 55-21, on Sunday.

In fact, neither team has yet seen much success in the win column this season. The Alligators are 0-4, the only winless team in the eight-team league. Their 68 points scored is just six better than the worst and their 161 points allowed are the most.

The Sígrs are 1-2. They have scored an impressive 118 points, but allowed 152. Their first game of the season was a tough loss when they gave up 22 unanswered points in a 49-50 loss to the visiting Vysočina Gladiators on April 14. Yet, they rebounded the following weekend when they got two late touchdowns from the quarterback Wesley Geisler – wide receiver Ivan Baykalov combination and beat the Pardubice Stallions on Easter Sunday, 48-47. The final 17-yard pass was completed with no time left on the clock.

Zbrojovka beat southern neighbor Znojmo, 2-0, on Sunday to stay alive in the battle to earn the right to a chance at promotion to the Fortuna:Liga.

Zbrojovka is 12-6-7 with 42 points and in fifth place in the Fortuna:Narodni Liga. Finishing third would offer a chance to advance; fourth place means a second year in the second league.

FC Lokomotiva-Horni Herspice plays this Sunday at FC Hradec Králové as it continues play in the lower bracket of the top women’s football league.

The eight-team league split evenly into a Championship Bracket and a Playout Bracket after the first 14 rounds. Lokomotiva needs to survive the lower bracket in order to stay in the top league next season. Last week, Lokomotiva tied FC Viktoria Plzeň, 1-1, in the first round.

Lokomotiva next plays at home on May 11 when it welcomes FC Viktoria Plzeň at 11 a.m.

FC Lokomotiva-Horni Herspice had a chance to reach the top flight of the restructured league, but they were unable to beat 1. FC Slovácko in the final game of the regular season. They lost in the final minute of the league’s most-attended game of the season.

Žabiny Brno logged many kilometers of travel for international tournaments and rallied in the postseason of the ŽBL, but they were unable to do what so many other teams have failed to do — beat ZVVZ USK Praha.

Praha won its ninth consecutive title on Wednesday when it swept the three games of the Finals, winning Game 3 at home, 93-56.

KP Brno, the runner up last season behind Praha and the semifinal losers this year to Žabiny Brno, finished fourth in the league when the lost to Sokol Nilfisk H. Králové, 3 games to 1, in the consolation finals.

https://www.brnodaily.com/2019/05/01/sport/brno-sports-weekly-report-the-battle-for-brno-alligators-x-sigrs/https://www.brnodaily.com/wp-content/uploads/2019/05/Sigs_caaf-1024x681.jpghttps://www.brnodaily.com/wp-content/uploads/2019/05/Sigs_caaf-150x100.jpg2019-05-01T10:49:51+02:00Bruno ZalubilSportBrno,Czech Republic,South Moravia,SportEvery year the rivalry between the Alligators and the Sígrs adds another layer of history and drama. The Sígrs have the upper hand for now. Photo credit: CAAF. Brno, May 1 (BD) — FC Zbrojovka plays Saturday and preps for big Tuesday evening game; Lokomotiva season continues in Playout...Bruno ZalubilBruno Zalubilbzalubil@hotmail.comAuthorA connoisseur of the unpredictable and unscripted drama of sports.Brno Daily

A connoisseur of the unpredictable and unscripted drama of sports.
View all posts by Bruno Zalubil →
« Far-Right March and Counter-Protest Planned For Mayday In Brno
Free Multi-Genre Festival “PonavaFest” Returns To Luzanky Park For The 4th Time »