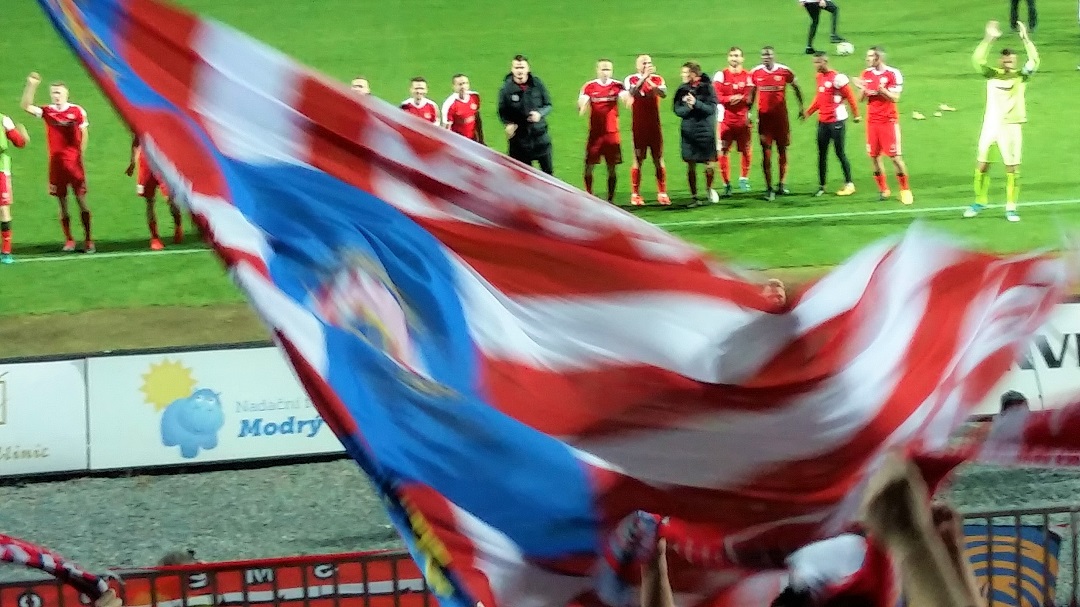 Zbrojovka fans have one more regular season game on Saturday. They hope for one more and a chance at promotion back to the top league. Photo credit: Bruno Zalubil.

Brno, May 15 (BD) — Second-place Draci host first-place Arrows tonight at 7; Lokomotiva hopes to get past loss when it hosts Dukla Saturday; Brno Cricket Club wins second in a row; Both Sígrs and Alligators play at home this weekend; and the Brno sports results and schedule.

For fans not able to attend the FC Zbrojovka game at FC Vítkovice last Saturday, the @Zbrojovka Twitter account proved invaluable — and it provided a nice soundtrack to the game: Ding, Ding, Ding.

The game — a vital one in the fight for promotion — started with a lot of action. Peter Štepanovský of Zbrojovka scrored at 3 minutes; Vitkovice scored at 5 minutes; then Štepanovský and Zbrojovka scored again at 7 minutes. Ding, Ding, Ding.

Eventually the fast-action rollercoaster ride settled and Zbrojovka won, 4-2, and maintained its position in third place in the Fortuna:Narodni Liga.

If Zbrojovka can maintain at least third place, they will have a chance to advance into the Fortuna:Liga next season, if they can win a home-and-away series against a low-level team from that upper league. Fourth place would mean a second year in the second league.

Štepanovský, who scored both goals in the win over Hradec Králové on national television on May 7, had a run of four goals in a row with the two quick goals on Saturday. He has eight goals during this spring half of the season and 11 overall, which is even with captain Lukáš Magera for the team lead and second best in the league.

Though the weather is not yet baseball-ish, the Czech extraliga is heating up.

Perennial champion Draci Brno are not at their customary top-of-the-standings position. Instead, the Draci (19-4) are a game behind the team that surprised them for the title last fall, Arrows Ostrava (20-3).

Those two teams will meet tonight (Wednesday) at MBS in south Brno. First pitch is 7 p.m. It will be the third time the Draci and Arrows will have met this season; they split the first two games.

FC Lokomotiva-Horni Herspice took a step backwards when they struggled against visiting FC Viktoria Plzeň last Saturday, but their 0-5 loss is not the end of the season.

Lokomotiva is halfway through the Playout bracket of the country’s top women’s football league. In their first run through other three teams, they have two points from 1-1 ties at FK Dukla Praha and FC Hradec Králové. The 0-5 home loss to Plzeň is their worst of the season, besides games against the dominant Sparta and Slavia teams.

In any case, Lokomotiva has a four-point lead over last-place FC Hradec Králové, which lost 4-0 at Dukla on Saturday, with three games remaining. The last-place team will be relegated to the second league.

The Lokomotiva junior team just won the Czech Cup for its division, so staying in the top league would be an important boost for the future of the organization.

Lokomotiva plays twice more at home: next week against FK Dukla Praha on Saturday at 10:30 a.m. and against FC Hradec Králové on June 1 at 11 a.m.

The Brno Cricket Club won its second match of the T20 season when it beat Vinohrady Cricket Club last Saturday in north Brno.

The Brno Cricket Club (2-1) is officially at the top of the standings, although it has the same record as Prague CC and Prague Barbarians CC Vandals.

Brno will next play at home on May 25 when it welcomes Prague Barbarians CC Vandals. The match begins at 3 p.m.

Both Brno teams will play home games this weekend: the Brno Sígrs host the Ústí nad Labem Blades on Saturday at 3 p.m. and the Brno Alligators will host the Aquaponik Ostrava Steelers on Sunday at 2 p.m.

The Sígrs (2-3) were shutout last weekend at Ostrava, 16-0. The Alligators (0-5) have been outscored by more than a hundred points so far this season.

A connoisseur of the unpredictable and unscripted drama of sports.
View all posts by Bruno Zalubil →
« Brno-Centre and Brno-North Districts To Collaborate With Artist Kateřina Šedá On New Project in Cejl
In Photos: Experience The Valtice Wine Market First-Hand »