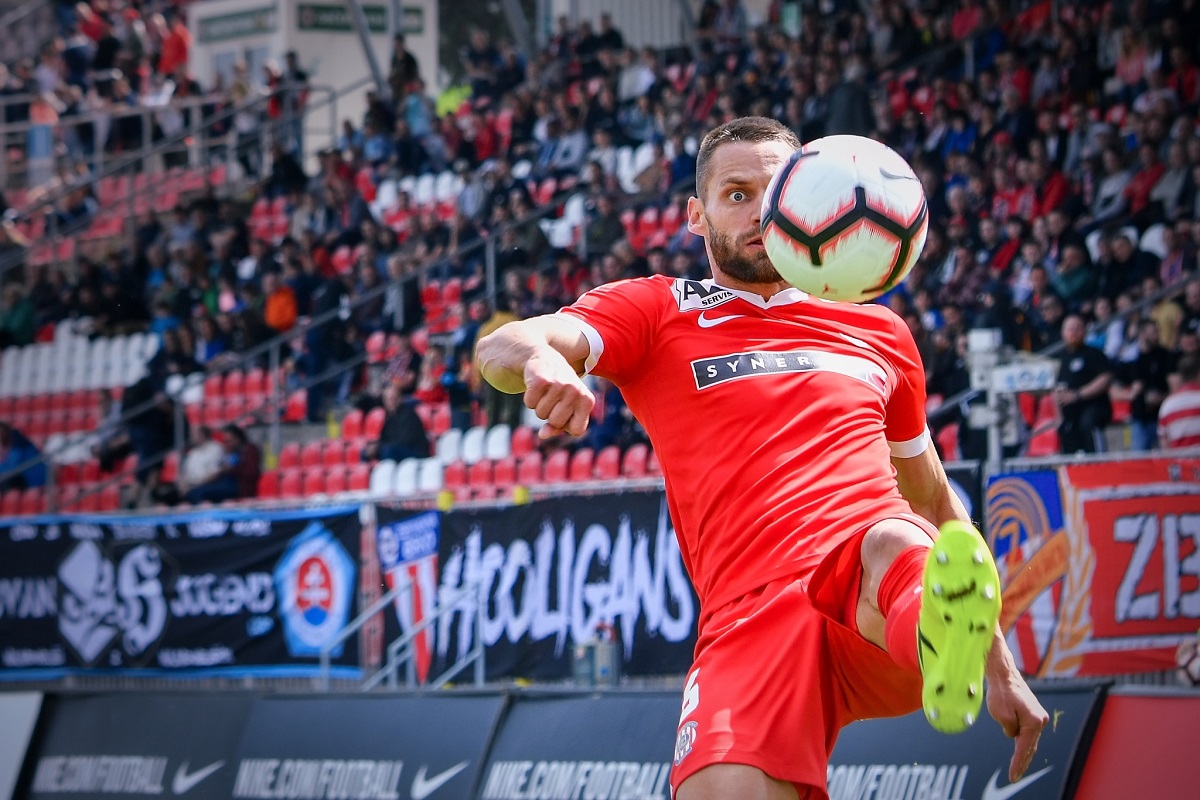 North Brno will be alive with passionate fans rooting for FC Zbrojovka and a return to the top Czech league. Photo credit: FC Zbrojovka.

Zbrojovka Finishes Regular Season With a Flourish, Příbram Series Next

Zbrojovka, which finished third in the Fortuna:Narodni Liga, will face Příbram, the third-to-last team in the top-league Fortuna:Liga, for the right to be promoted back to the Fortuna:Liga next season.

Game 1 is today (Wednesday) in Brno at Stadion Srbská at 6 p.m. Tickets are available at the gate, even though more than 6,000 had already been sold through Tuesday afternoon.

Zbrojovka finished its 30-game, first season in the second league of the Czech Republic with a record of 17-6-7 and 57 points.

Zbrojovka has built a lot of momentum for the games against Příbram, beating Třinec, 5-0, and Jihlava, 1-6, in the past two weeks.

Because Zbrojovka had already earned third place in the standings coach Pavel Šustr mixed some younger players into the starting lineup against Jihlava. Twenty-year-old Antonín Růsek scored at 17 minutes; 19-year-old Martin Zikl scored at 41 and 52 minutes; 23-year-old Jakub Přichystal tallied at 43 minutes; 25-year-old Robert Bartolomeu added one at 72 minutes; and 21-year-old Ondřej Vintr finished it off at 77 minutes.

Twenty-two-year-old Jiří Floder gave up just one goal. He has allowed only three goals in 540 minutes. He has four shutouts since earning the starting spot in goal six games ago.

With the final offensive push, Zbrojovaka finished the regular season with a league-high 63 goals. Their 31 goals allowed were fourth best in the league.

Lokomotiva now has a seven-point advantage over last-place FC Hradec Králové, the team that will visit South Brno on Sunday for an 11 a.m. game.

Only the last-place team will be relegated to the lower league at the end of the season, so the team from South Brno has accomplished its season-long goal of earning their keep in the top women’s league.

Next year, they will likele further incorporate younger players — and perhaps success — from the junior team, which won the country’s Junior Cup earlier this month.

The top Lokomotiva team beat FK Dukla Praha, 5-0, on May 18 to guarantee that they would stay in the top women’s league.

On June 9, Lokomotiva will finish play in the Playout Bracket when they travel to FC Viktoria Plzeň.

Cardion Hroši Brno needed some wins in order to earn the right to play in the six-team advanced group for the second part for the Czech extraliga baseball season. They got three, sweeping a Saturday doubleheader in Olomouc, 2-9 and 1-5, and then beating the Skokani at home in Brno, 7-3, on Sunday.

The Draci, who finished the first 27 rounds early, started the Pick6 part of the season with three games against Ostrava last weeekend. It did not go well. The Draci lost in Ostrava 10-7 on Friday and 6-5 on Saturday, then lost their third in a row, 2-3, at home on Sunday.

Then, on Tuesday evening, the Baseball Czech Instagram page announced that Brno manager Arnošt Nesňal would not longer be the head coach of Draci Brno. There was no mention on the baseball.cz website or on draci.baseball.cz and the news could not be independently confirmed at press time.

Nevertheless, the Hroši and Draci will play three games this week: Thursday at 7:30 p.m. and Friday at 7 p.m. at MBS, and Saturday at 4 p.m. at the Hroši field.

The Brno Sígrs took a big step forward in their season when they beat the Eastern Division-leading Vysočina Gladiators in overtime on Sunday. The official score, as listed on the caaf.cz website, was 27-28.

Tyrone Clark led Brno, the visiting team, with three touchdowns, including a 3-yard run to tie the game at 27 with 3:19 left in regulation and another 3-yard run in overtime.

After the overtime score, quarterback Wesley Geisler scored the 2-point conversion on the ground.

The Gladiators were able to score an overtime touchdown, but their 2-point conversion failed.

The Eastern Division now has three teams with four wins: Vysočina Gladiators (4-2), the Aquaponik Ostrava Steelers (4-2) and the Brno Sígrs (4-3).

There are three games remaining in the regular season and, with the victory over the Gladiators, the Sígrs have a decent chance to advance into their second postseason in their second season in the top league of the country. They go to the Pilsen Patriots (2-4) on June 8, host Ostrava (4-2) on June 15 and host the Alligators on June 22 on the final weekend of the regular season.

The Alligators have a tough remaining schedule: at the Aquaponik Ostrava Steelers on June 9; home against the Vysočina Gladiators on June 16; and the June 22 matchup against the cross-town rival Sígrs.

The Brno Cricket Club is now 4-2 on the season.

A connoisseur of the unpredictable and unscripted drama of sports.
View all posts by Bruno Zalubil →
« Czech Government To Raise Taxes On Cigarettes, Hard Alcohol, and Gambling
Weekly Protests Against Prime Minister Babiš and Minister of Justice Benešová Continue »