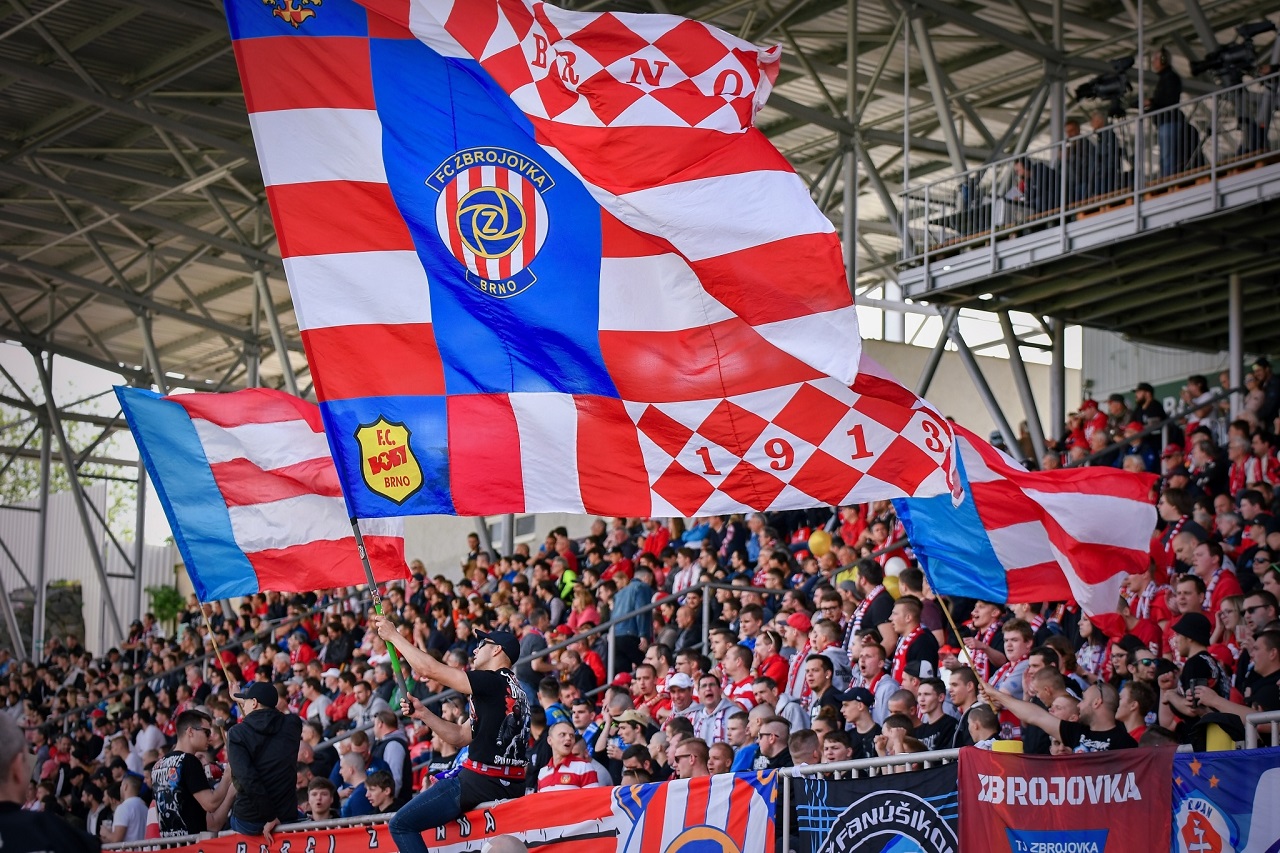 Not many things attract 8,523 people on a Wednesday evening. FC Zbrojovka did for its attempt to return to the top league. Photo credit: FC Zbrojovka.

Brno, June 5 (BD) — Lokomotiva wins again and gets rematch in Plzeň to close out season; Hroši Brno, Draci battle in Top6; Sígrs and Alligators have road games after week of rest; Brno Cricket Club finishes season with home matches on the next two Saturdays; and the Brno sports results and schedule.

When Zbrojovka, the top scoring team of the Fortuna:Narodni Liga, desperately needed a goal, they finished with only one shot on goal and failed to earn promotion when its season sputtered to a close with a scoreless tie at 1. FC Příbram on Sunday.

The two-game series between the teams did not change anything: FC Zbrojovka will play another season in the second-league Fortuna:Narodni Liga and 1. FC Příbram will stay in the top-league Fortuna:Liga.

“The players were to their limits,” said head coach Pavel Šustr. “They were mainly upset that we couldn’t score a goal.”

On Wednesday evening, the two teams had met in Brno. The 3-3 tie meant that Zbrojovka had to win on Sunday or have, at least, a 4-4 tie. More than 500 Zbrojovka fans travelled about three hours to Příbram, just south of Prague. They wore red shirts, cheered from the end of the field and, unfortunately, went home disappointed.

“One of my tasks that I internally set for myself was to get people back to football,” Šustr said. “The atmosphere was good. After the home game I told the players that we play football for this, and they were so happy that it was like that and that we have such fans.”

The attendance for the Game 1 of the series was 8,523. It was a dramatic game with ups and downs. Zbrojovka was caught flat-footed becuase Příbram, having played in the country’s top league all season, took the field with more speed and more quickness than Brno had become accustomed to in the second league. Within 10 minutes, Příbram had a two-goal lead.

After a few more minutes of play, Brno upped its level and began to slowly control play in its offensive zone. In the 15th minute, Lukáš Magera, the Brno leading scorer and captain, collided with the Příbram goalkeeper. There was a no call, but Magera made sure to use the confrontation to inspire his team.

It worked. Two minutes later, Michal Skoda took a short throw-in and launched it across the field to Magera, who headed it just inside the near post of the Příbram goal. At 19 minutes, it was 1-2.

Late in the first half, Šimon Šumbera was able to gather an attempted clearance and kick it with his heal past the Příbram goalkeeper. It tied the score at 2-2 for halftime.

Magera came through again in the 66th minute. Pavel Eismann put a free kick across the box and perfectly over two defenders so that Magera could score with his head again. Brno had overcome the two-goal deficit and took the lead with less than 30 minutes to play. Things looked good.

Unfortunately, the emotion of the game took its toll. Several Zbrojovka players were visibly exhausted in the final 15 minutes and substitutions did not do enough to rejuvenate the team. In the 89th minute, Pribram brought the ball down to the baseline, passed it back into the middle of the box and found an unmarked player who tapped it easily into the goal. The entire stadium deflated, all of the air had left the tires.

Four days of rest were not enough. The offense was flat on Wednesday.

“We get up tomorrow and start planning next season,” Šustr said when the two-game series had reached its end.

Zbrojovka finished its 30-game, first season in the second league of the Czech Republic with a record of 17-6-7 and 57 points. The team ended the regular season with six straight wins by outscoring its opponents 21-3, beating Třinec, 5-0, and Jihlava, 1-6, in the final two weeks to push their goal total to a league-high 63.

SK Dynamo Č. Budějovice (23-3- 4, 72) finished first and earned an automatic promotion. Second-place FC Vysočina Jihlava (17-7-6, 58 points) played MFK Karvina in an away-and-home series with a chance at promotion, and they too failed to move up to the first league.

Lokomotiva Brno-Horni Herspice was already guaranteed to retain their place in the top women’s football league of the country when they beat FC Hradec Králové, 3-0, in South Brno on Saturday. For good measure, the jumped into second place of the four-team Playout Bracket.

Lokomotiva will finish the season on Sunday when they travel to FC Viktoria Plzeň.

Plzeň is the top team in the Playout Bracket with a 5-0-0 record. Second-place Lokomotiva is now 2-2-1. When the two teams met last month in Brno, Plzeň won handily, 0-5. But that loss brought the Brno team together and contributed to the renewed spirit that resulted in wins against third-place FK Dukla Praha (1-1-3) and now fourth-place Hradec Králové (0-1-4).

Hradec Králové will be relegated to the lower league at the end of the season.

Cardion Hroši Brno earned their way into the Top6 of the Czech extraliga only to face a familiar rival for three games: Draci Brno.

The only thing was that Draci Brno looked like a different team. They were coming off of three straight uncharacteristic losses to the Ostrava Arrows and longtime manager Arnošt Nesňal had stepped down as the on-field leader of the team.

Nevertheless, the Draci still had quality and they won 10-3 on Thursday and 4-1 on Friday, before the Hroši got the upper hand at home, 5-4, on Saturday.

Nesňal stepped down from the on-field leadership position after the Draci started the Top6 part of the season with three losses to defending-champion Ostrava Arrows. It was officially announced on the Draci website on May 30.

The Hroši play a double header against Kotlářka Praha on Saturday, before returning to Brno for the third game of the series. The Draci have no scheduled extraliga games this weekend, then play Kotlářka Praha next weekend.

Technika Brno, which finished last through the first 27 games of the season, dropped its first two games in the lower bracket, losing twice to the Třebíč Nuclears, 0-2 at home on Friday and 4-3 away on Saturday.

This lower bracket includes Technika and the three other lower teams from the extraliga regular season — Třebíč Nuclears, Olympia Blansko and Skokani Olomouc — and the top teams from the lower league: Klasik Frýdek-Místek, Sokol Hluboká, SaBaT Praha and Blesk Jablonec.

Both the Brno Sígrs and the Brno Alligators got a week off to prepare for their final three regular season games. They are both on the road this weekend, then back in Brno for the final two weekends, including Battle of Brno II on June 22.

The Sígrs (4-3) are second in the Eastern Division and they have a decent chance to advance into their second postseason in their second season in the top league of the country. They go to the Pilsen Patriots (2-5) on Saturday, host Ostrava (5-2) on June 15 and host the Alligators on June 22 on the final weekend of the regular season.

The Alligators (0-7) have had a tough season and every game looks to be difficult. They are at the Aquaponik Ostrava Steelers on Sunday; home against the Vysočina Gladiators (4-3) on June 16; and finish with the June 22 matchup against the cross-town rival Sígrs.

The Brno Cricket Club traveled to Vinohrady Cricket Club for a dominating win last Saturday, scoring 152/10 in 18.4 overs. Vinohrady was able to score just 111/8 in 20 overs.

Brno will finish the regular season with home games on each of the next two Saturdays. The Prague Cricket Club, second team (0-4), comes to North Brno this Saturday at 3 p.m.

Then, the last and perhaps most important game of the year will be June 15 when Brno (5-2) hosts Prague Cricket Club, first team (5-1). The game starts at 3 p.m.

https://www.brnodaily.com/2019/06/05/sport/brno-sports-weekly-report-weak-zbrojovka-offense-leads-to-another-second-league-season/https://www.brnodaily.com/wp-content/uploads/2019/06/Zbrojovka050619-1024x682.jpghttps://www.brnodaily.com/wp-content/uploads/2019/06/Zbrojovka050619-150x100.jpg2019-06-05T09:31:42+02:00Bruno ZalubilSportBasketball,Brno,Czech Republic,SportNot many things attract 8,523 people on a Wednesday evening. FC Zbrojovka did for its attempt to return to the top league. Photo credit: FC Zbrojovka.Brno, June 5 (BD) — Lokomotiva wins again and gets rematch in Plzeň to close out season; Hroši Brno, Draci battle in Top6; Sígrs...Bruno ZalubilBruno Zalubilbzalubil@hotmail.comAuthorA connoisseur of the unpredictable and unscripted drama of sports.Brno Daily

A connoisseur of the unpredictable and unscripted drama of sports.
View all posts by Bruno Zalubil →
« News In Brief: May’s Headlines In The Czech Republic
Average Wage in CR Reaches CZK 32,466 in Q1 of 2019 »