Large Protest of Up To 500,000 People Planned For Prague’s Letná Park This Sunday 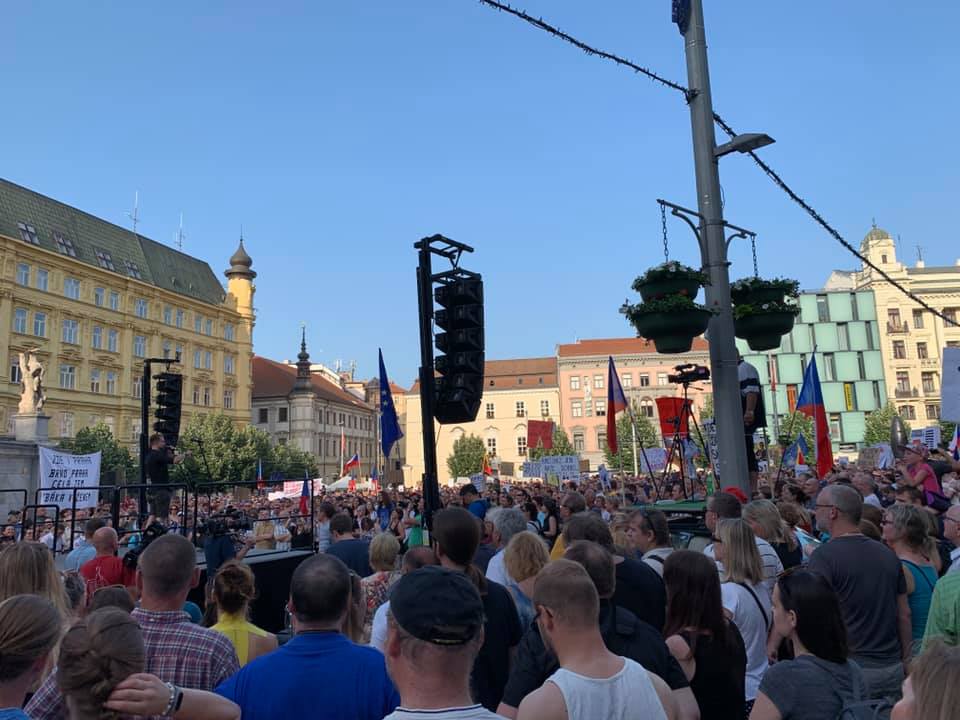 The organisers hope to capitalise on the sustained protests that have been taking place throughout the country in the last two months. Photo: Around 6,000 people joined the anti-government protest on Náměstí Svobody in Brno last week. Credit: Brno Daily / Courtesy of a reader.

Brno, Jun 19 (BD) – The protest is organised by campaign group Milion Chvilek Pro Demokracii [“One Million Moments For Democracy”], who are behind the anti-government protests that have been held in hundreds of towns and cities around the Czech Republic for the past two months, culminating in a national event on 4 June in Wenceslas Square, attended by an estimated 120,000 people. Now the group is claiming that Sunday’s event in Prague’s Letná Park could attract as many as 500,000 attendees.

The protests were sparked by developments in the investigation into the financial affairs of Prime Minister Andrej Babiš and the Agrofert Group, the holding company he created to operate his business empire. A recent preliminary audit report from the European Commission concluded that Babiš was guilty of conflict of interest related to EU subsidies received by Agrofert, in a case known as the “Stork’s Nest” Affair, after the Agrofert-owned complex near Prague which is at the centre of the investigation. Babiš has long maintained that all funds received by Agrofert were legal and that he has transferred control of the group out of his hands to avoid conflicts of interest related to his political position.

In late April, following the conclusion of the investigation by Czech police and amid expectations that Babiš would face criminal charges, the Justice Minister unexpectedly resigned and was replaced by Marie Benešová, a key ally of Babiš and President Miloš Zeman, sparking widespread criticism and protests across the country which have continued each Tuesday since then.

Critics of the Prime Minister claim he is trying to influence the decision of the Chief Prosecutor over whether to proceed with the charges. Milion Chvilek Pro Demokracii are calling for the resignation of Babiš and Benešová, for Agrofert to return the money alleged to have been claimed illegally from the European Union, for Babiš to give up his media holdings, and for an end to government contracts for Agrofert.

According to Czech political scientist Jiří Pehe, writing in iROZHLAS, the protests have little chance of forcing the resignation of Babiš or Benešová, even if the numbers do match the hopes of the organisers. However, Pehe compares the movement to the so-called “Gorilla” corruption scandal in Slovakia in 2011-12, which brought thousands of Slovaks onto the streets in protest at political corruption. These protests formed connections between protest groups and led to better organisation of Slovak civic society, which would later prove decisive in the public response to the 2018 murder of Jan Kuciak, which eventually forced the resignation of Prime Minister Robert Fico.

https://www.brnodaily.com/2019/06/19/news/politics/large-protest-of-up-to-500000-people-planned-for-pragues-letna-park-this-sunday/https://www.brnodaily.com/wp-content/uploads/2019/06/brno-protests-anti-babis.jpghttps://www.brnodaily.com/wp-content/uploads/2019/06/brno-protests-anti-babis-150x113.jpg2019-06-19T09:26:26+02:00Jack StephensPoliticsBabiš,Czech Republic,EU,News,PoliticsThe organisers hope to capitalise on the sustained protests that have been taking place throughout the country in the last two months. Photo: Around 6,000 people joined the anti-government protest on Náměstí Svobody in Brno last week. Credit: Brno Daily / Courtesy of a reader. Brno, Jun 19 (BD) –...Jack Stephens jack.stephens50@gmail.comAuthorA writer and English teacher originally from London who has lived in Brno since 2011, interested in politics, low culture, and all things strange and/or Czech.Brno Daily

A writer and English teacher originally from London who has lived in Brno since 2011, interested in politics, low culture, and all things strange and/or Czech.
View all posts by Jack Stephens →
« T-Mobile To Offer Unlimited Data Package For The Czech Market This Summer; Other Operators Expected To Follow
Brno Sports Weekly Report — Sígrs, Alligators Continue Their Football Rivalry this Saturday »