Food Review: Brno Is No Longer a Desert For Vegans 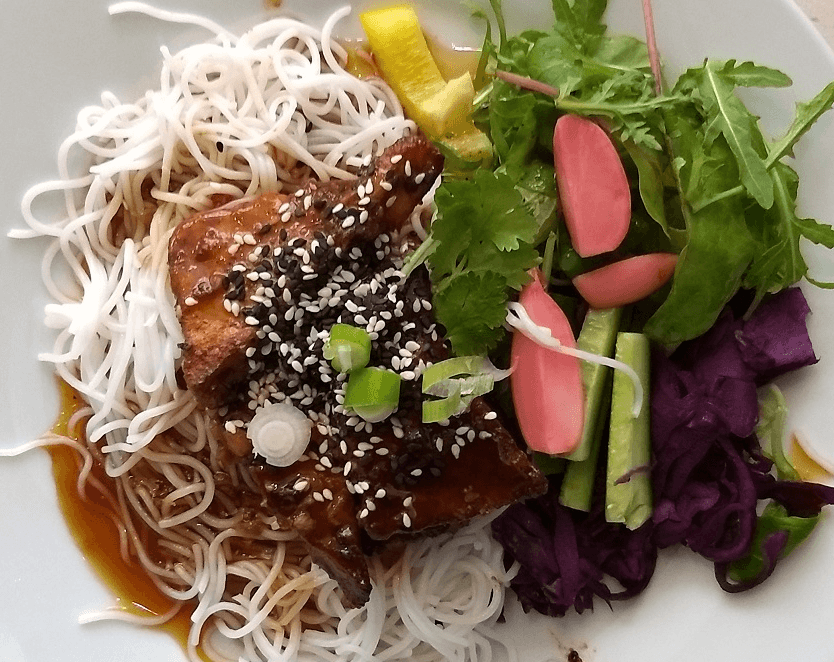 There was a time when vegans dining out in Brno would have to put up with a plate of vegetables and carnivores would react in horror at the thought of a vegan meal. My experience is that neither have anything to fear eating vegan food in Brno. Indeed, everyone should try it! Photo credit: Charles du Parc.

Brno, Jul 30 (BD) – A few years ago, if I had a vegan friend visiting, I would have had little choice about where to take them to eat. There was Rebio (though their vegan offer was limited) and Haribol, but these were more refueling stations, not somewhere to spend a couple of hours over a meal and a beer. Vegalite on Slovákova was one of the first to give vegans a wide offer; then along came Forky’s, now on Jakubské náměstí, and Die Küche in Kabinet Muz, the performing arts venue. In the last couple of weeks I have been to the last  three.

Die Küche is the cafe/bistro at Kabinet Muz but during the day it feels light and airy as it has huge windows and a high ceiling. Even though the tables are quite close together and you may have to share, there is a great feeling of space. Food is only served till 19h and the menu reflects the fact that people will either want lunch or something light. Although the daily set lunch menu has only one choice there are other options on the standing menu such as  a club sandwich or seitan ribs.

The lunch menu choice on the day I visited started with a sweet and sour vegetable soup. This was light but full of vegetable chunks and topped with a large sprig of fresh coriander. It was all brought together with a balance of sweet and sour flavours that played around the taste buds. The main course was crispy Korean BBQ pieces with rice noodles, homemade teriyaki sauce, fresh herbs and salad with pickled radishes. When the plate arrived it looked like some surreal portrait with the vegetables suggesting eyes, nose and mouth surrounded by a cascade of white haired  noodles. Again you felt great care had been taken with the balancing of the flavours; the pickled radishes fighting the teriyaki sauce but not overpowering everything.

It all definitely tasted freshly made and had no sign of the tiredness of flavour and texture that creeps into food prepared too far in advance and left standing. The service was efficient but you felt a little under pressure as the restaurant was full.

Forky’s has recently moved into the former premises of the Savoy cafe on Jakubské Náměstí. Vegan restaurants are often small niche affairs. If that is your perception, then Forky’s is the brash big brother. It’s huge with plenty of outside tables. It has the air of a fast food restaurant as you order at the counter and there are revolving photos of menu items above your head.

The menu backs this up with a range of burgers, ’not dogs’, noodles and other popular fast food type dishes. In addition there is a set lunch menu choice. On the day I went it was cream of carrot and roasted pepper soup followed by a classic falafel combination with tabbouleh, couscous and tahini. It was produced within a minute of ordering and great if you want a quick lunch. I have had the burgers there and particularly like the kimchi burger. They describe their offer as ‘healthy fast food’ and that is exactly what it is. Whatever your non-animal dietary requirements, you will find something to satisfy you there.

The last of the trio, Vegalité, has been around the longest. It has the feel of a typical cellar bar, which I have seen described as hipster but I don’t quite go along with that . It offers a traditional 3 choice set lunch menu and normal menu which leant towards vegetarian/vegan versions of typical meat dishes such as  guláš and kebab.The welcome was friendly and from the lunch menu I wanted to choose the courgette and broccoli patties and mashed potato. However although the lunch menu is offered till 4pm, by 2pm two of the choices had been changed.

So, I ended up with robi schnitzel. The soup however was the same and thankfully  so. The menu described it as Bulgarian tomato and roasted pepper; the result was delicious. It was a rich thick soup where the sharpness of the tomato was tamed by the sweetness of the pepper. I am not usually a fan of tomato based soups but this I could eat every day.

The robi schnitzel was what you would expect, namely a slice of robi fried in breadcrumbs, filling but nothing to get excited about. The mashed potato, however, was creamy and tasty and combined well. I complemented it with the light summer 10° Veg ale, which is specially brewed for them by the Radnice micro brewery in Jihalava.

So, three very different restaurants doing very different things. There were two standout dishes which would get me coming back: the crispy Korean BBQ pieces with rice noodles and the Bulgarian tomato and roasted pepper soup. If you want a typical pub night then Vegalité is your place; Forky’s is great for young families and Die Küche is a great meet-up place during the day and livelier art night. Maybe it is time to try going animal free-at least for one meal.

Facebook Comments
https://www.brnodaily.com/2019/07/30/events-in-brno/food-review-brno-is-no-longer-a-desert-for-vegans/https://www.brnodaily.com/wp-content/uploads/2019/07/Vegetarian-resturant-BBQ-PC-Charles-du-Parc.pnghttps://www.brnodaily.com/wp-content/uploads/2019/07/Vegetarian-resturant-BBQ-PC-Charles-du-Parc-150x119.png2019-07-30T13:55:35+02:00Charles du ParcBD MagazineEating Out / NightlifeEvents in BrnoBrno,Brno Urban Guide,Czech Republic,Eating Out / Night Life,Food,lifestyle of health and sustainabilityThere was a time when vegans dining out in Brno would have to put up with a plate of vegetables and carnivores would react in horror at the thought of a vegan meal. My experience is that neither have anything to fear eating vegan food in Brno. Indeed, everyone...Charles du ParcCharles du Parcchaduparc@gmail.comAuthorCharles du Parc comes originally from London and worked there in fashion retailing for several years. Before coming to the Czech Republic in 2005, he ran his own delicatessen and café in a small town on the south coast of England. He has also served as a judge for the World Cheese Awards. Having fallen in love with Brno,he now regards it as home and works there as a freelance teacher, writer and translator.Brno Daily

Charles du Parc comes originally from London and worked there in fashion retailing for several years. Before coming to the Czech Republic in 2005, he ran his own delicatessen and café in a small town on the south coast of England. He has also served as a judge for the World Cheese Awards. Having fallen in love with Brno,he now regards it as home and works there as a freelance teacher, writer and translator.
View all posts by Charles du Parc →
« Brno To Allow Card Payments On Public Transport Starting Next Spring
Brno to Provide Apartments For Ukrainian Nurses at St. Anne’s Hospital »