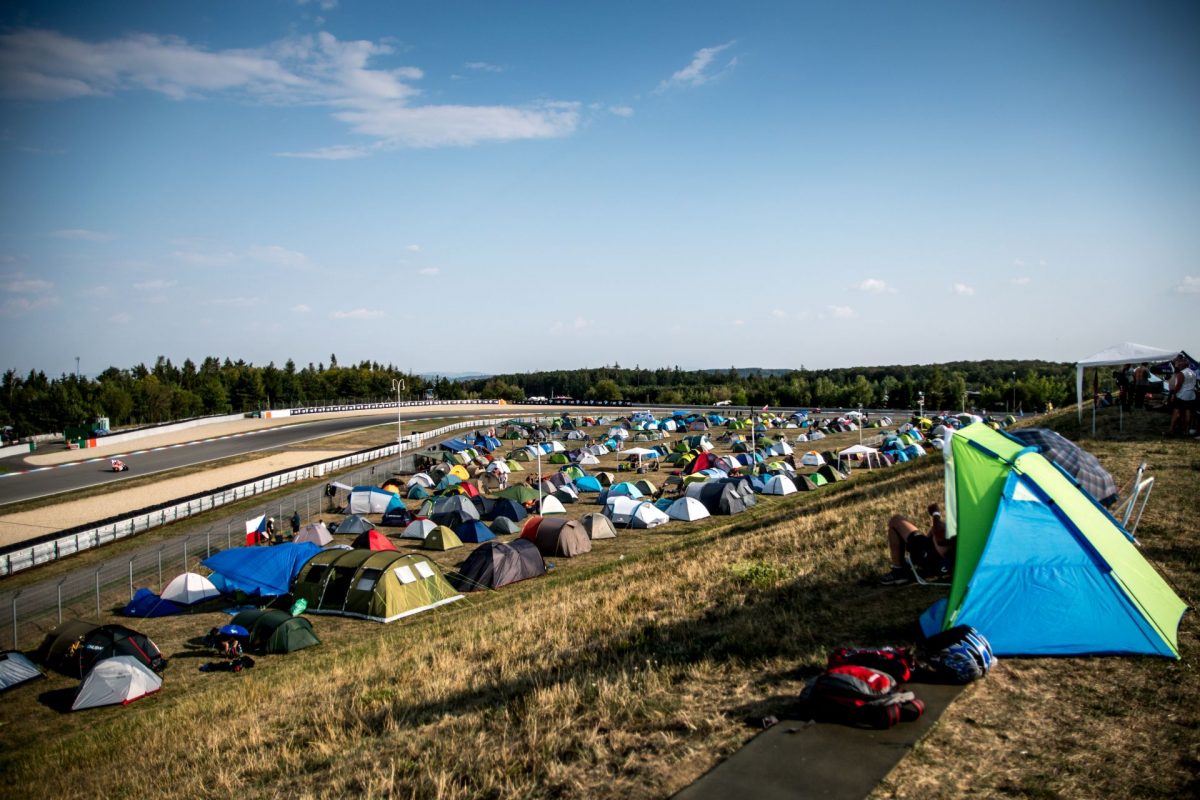 It’s a trick question. All of them are correct because all of them are racetracks and events where the Grand Prix motorcycle racing circuit stops during the 2019 season.

As you may have noticed, right in the middle, smack dab in the center, the 10th of 19 races in the season, is our very own little city of Brno: the Czech Republic motorcycle Grand Prix has come to town and we are the focus of the motor sports world. Qualifying started yesterday and continues today. The main events are tomorrow.

What does all of this mean?

It means that legions of foreign tourists have invaded Brno.

The city of Brno takes on a distinct international flavor when the MotoGP circuit comes through town. Germans are generally the most noticeable group of visitors. There are also many Italians, Austrians, Hungarians and Brits. More than 80,000 people will be in attendance for the finals. Millions more will be watching around the world.

Hotels have been booked for months. Groups of men have been moving throughout the city center, talking loudly to each other while looking for the next bar. The discos have been packed and humming into the wee hours of the morning.

Yellow shirts with the number of superstar Valentino Rossi — 46 — are everywhere.

Loud motorcycle engines are commonplace, both at the track and on the roads throughout the region. Just before the finals tomorrow, JAS-39 Gripen fighters jets will roar over the crowd.

Not surprisingly, many locals have left for the weekend.

The local police and transportation authority are prepared. Both are specifically focusing on the increased cars and motorcycles on the roads to avoid a traffic jam of epic proportions and to ensure the safety of pedestrians. This year should be better than years past because there is less local construction on Highway D1.

Public transportation is providing frequent and free buses to the racetrack, including Bus 400 from Mendlovo náměstí and Bus X from Žebětín.

“This is one of the biggest events that the police deal with every year in the Czech Republic,” said Leoš Tržil, the Director of the Regional Directorate of the Police of the South Moravian Region

In years past, local police have had to administer first aid several times. The heat exacerbates the danger. Among the specific incidences from last year: a Slovenian man tried to dig up a traffic sign and a 41-year-old woman, with a blood-alcohol level of 0.35, required medical assistance. The excessive noise from the motorcycles also causes confusion among the local animal populations; last year a deer had to be freed from an entanglement at a private home.

Not all locals see the CzechGP as something to fear. They see the influx of foreign money as an opportunity.

Petr Bouchal, for example, found a way to connect the many empty dorm rooms in the city with the scarcity of accommodations required for the world-class event. Five years ago, the mechanical engineering student from VUT started GProoms.eu.

In the first year, he and his university friends put 200 race-goers into 100 dorm rooms. He cemented relationships with repeat customers through excellent service, which includes breakfast, a professional and informative survival guide, and, after a first-year inspiration led to a late-night run to Tesco to buy 3,000 cans of beer, a going-away drink. Since then, the group has handled more than 10,000 guests.

“Half of our sales are from the Czech Republic,” Bouchal said, “but we have a website in five languages and the rest are foreigners.”

The success led to a successful expansion: GPtents.com operates throughout Europe at many different events along both the MotoGP and the F1 circuits.

“This is the biggest sports event in the Czech Republic,” Bouchal said. “It is the most popular, most shared of all events all around the world. Everyone knows where Brno is this weekend.”

Hotels increased their prices throughout the region, some reportedly as much as three times. Many locals have rented out their homes through Airbnb for hundreds of euros.

All businesses who deal with tourists have geared up for this weekend. The number of taxis has increased. Restaurants have stocked up.

“We have more girls because we have more clients,” said a female at Moulin Rouge, a night club, who did not want to be identified. “We have more exotic girls and more reinforcements because it is the biggest weekend of the year.”

Today is the second day of qualifying. Tonight will be a party night. Tomorrow, all of the visitors will be at the racetrack, hung over but ready for a long day of motorcycle racing.

Last year, in the featured race, three competitors finished within a literal blink — 0.5 seconds — after 21 laps, each of which are 5.403 km long and include 15 turns.

Whatever happens this year will again put the city of Brno into the international news and, arguably more than anything else, make this city known around the world.

Little kids in Qatar and Japan will want to know whether Rossi can with an eighth local race and old men will be glued to the international broadcast in Argentina and Australia.

And, on Sunday, all of the visitors will make their weary ways home to tell their tales of 2019 CzechGP weekend in Brno.

A connoisseur of the unpredictable and unscripted drama of sports.
View all posts by Bruno Zalubil →
« Additional ‘Park & Ride’ Sites Planned For Lesná and Ostravská
What’s Up Brno? – Events in Brno, Week n°32 »