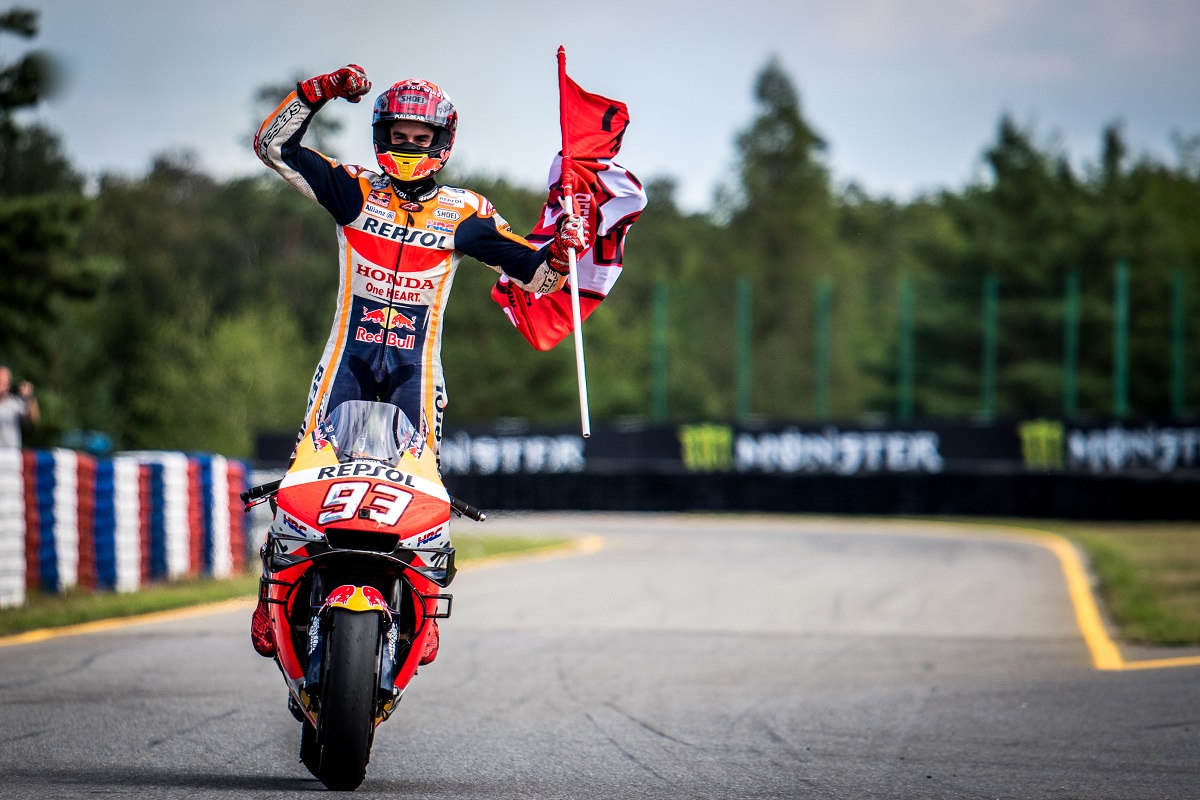 The CzechGP, which was won by Marc Márquez, attracted a total of 186,793 race fans. See the story below. Photo credit: czechgp.com.

After two ties to open the season, management threatened the players of FC Zbrojovka Brno with financial penalties for lackadaisical play. Apparently, it worked — although the head coach needed to intervene as well.

In the end, Zbrojovka got two second-half goals at FK Baník Sokolov on Saturday to log their first win of the season. They are now 1-2-0 in three matches.

Ústí nad Labem is next on the schedule. The former top-flight team comes to Brno on Friday. The game starts at 7 p.m. Zbrojovka should be in much better spirits when they take the field. After the two ties, team management announced that it would “impose financial penalties for an unprofessional approach and shameful performance”.

At Sokolov, head coach Pavel Šustr made just the right moves to improve the performance and spark the offense. In the 70th minute, he brought in Robert Bartolomeu. Three minutes later, Ondřej Vintr (whom Šustr put in the game in the 67th minute) brought the ball up the middle of the field and found Bartolomeu at the top corner of the 18-yard box. Bartolomeu settled the ball and then shot it across the goal to put Zbrojovka on the board.

Six minutes later, Pavel Eismann got a slow rolling ball through the box that trickled between and just out of reach of two defenders. Eismann lined it up with this left foot and tapped it to the near post past the outreached arms of the goalkeeper.

SK Líšeň responded to every goal that visiting FC Hradec Králové scored and earned a point in their third game in the Fortuna: Narodni Liga season with a 3-3 tie on Saturday. The game was sold out.

Jan Hladík scored the first two catch-up goals, at 9 and 48 minutes, for the home team. Marek Vintr, who also scored the previous week in the win at MFK Chrdim, got the tie in the 86th minute.

Líšeň is unbeaten in three games and now has five points.

Líšeň plays next at FC Sellier & Bellot Vlašim on Sunday at 5 p.m. The next home game is on Aug. 17 against FC Slavoj Vyšehrad.

Draci Eliminated By Eagles Praha in the Wildcard Series

After years of dominating Czech baseball, Brno Draci made the postseason this year, but the Wildcard Series is where their 2019 season ended.

Brno Draci lost twice in Prague and Eagles Praha earned the right to advance to the Czech Series and take on Arrows Ostrava for the championship title. The Series starts Aug. 16-18. The Draci, who have won the league title 21 times, failed to reach the Czech Series for the first time in more than two decades.

The 2019 season will be remembered as much for off-field events as on-field events. Brno had a significant shake-up within its management just before the Top6 phase of the season in late May when longtime manager Arnošt Nesňal moved up to more of a general manager role and longtime slugger Pavel Budsky took over as on-field manager. Hynek Čapka stayed on as the top assistant and John Hussey took on the role of pitching coach. Both Budsky and Hussey continued to play as well.

The changes were, perhaps, a long time in coming. The Draci had dominated the 2018 season until they were shocked in the Czech Series by Arrows Ostrava. It was a changing of the guard as the Arrows maintained their league-leading status throughout this 2019 season. The Draci finished the regular season 22-5, two games behind Ostrava (24-3). That is when the management changes were implemented.

At the beginning of the Top6 schedule, the Arrows truly established themselves as the league’s top team, beating the Draci in three consecutive games and forcing Brno to scratch its way up the standings for the remainder of the two-month phase of the season.

The Draci finished the Top6 in third place with a record of 11-9. Ostrava (16-4) went directly to the Czech Series and Eagles Praha (15-5) got home-field advantage in the Wildcard Series.

In the best-of-three Wildcard series, the Draci were behind from the beginning. They were shutout on Friday, 8-0, in Prague.

On Saturday, in the only series game that would be played in Brno, the initial moments felt like more of the same. Prague loaded the bases with no outs in the top of the first inning against former Major League pitcher Peter Moylan. The game, the series, the season all felt like they could be over before the home team even got a chance to bat.

But, 12 years and 499 games of experience against the best batters in the world, mostly in pressure-packed relieving situations, came to the fore: Moylan gave up a run on a sacrifice fly, then took care of a pop up himself and limited the damage with a strikeout to end the inning.

In the bottom of the first, Martin Schneider got a hit to get on base. The next batter, Zachary Wilson, hit a two-run home run to put the Draci in the lead.

After an hourslong rain delay, the Draci held on to win, 2-1.

Moylan went four innings — one hit, two walks, three strikeouts and one earned run — before rain suspended play. Then Hussey went four innings, gave up three hits and a walk and struck out three. Schneider came in to get the save, although only after he allowed two on base via hit and walk, a reminder that the Eagles were not to be written off.

To wit: on Sunday, the Eagles scored six in the bottom of the second and maintained their lead en route to a 8-4 win and a two-games-to-one series victory.

Marc Márquez started from the pole position and led all the way to the finish in the Monster Energy Grand Prix České republiky 2019 on Sunday.

The race, which was delayed and shortened to 20 laps because of rain, was the highlight of a three-day race weekend at the Masarykův Okruh (Masaryk circuit, Automotodrom Brno). A total of 186,793 race fans were in attendance.

“From the organizational point of view, this year was a success,” said Adam Svoboda, Secretary of the Czech GP Association. “Despite the rainy weather on Saturday, we did not experience any major complications, neither in traffic nor in the Masaryk Circuit. Similarly, Saturday’s bad weather did not significantly affect the number of tickets sold on the spot.”

Marquez (Honda) won in 39 minutes, 24.430 seconds. Andrea Dovizioso (Ducati), the Italian who won last year in Brno, was 2.452 seconds back in second. Australian Jack Miller (Ducati) was another 3.497 seconds back in third.

The victory was Marquez’s 50th at the MotoGP level. Valentino Rossi (Yamaha), who finished sixth on Sunday, tops the list of premier-class wins with 89. Overall, Marquez has won 76th race in all categories.

Brno notched its first win of the T40 season when it got revenge against the Prague Cricket Club, first team, at home on Saturday. Brno went 136 all out (35 overs). Prague went 90 all out (27.2 overs).

The Prague first team beat Brno in Prague on July 27.

Brno, which was the runner up during the T20 season, is now 1-2 from four matches (one was abandoned). They are fifth in the six-team T40 league.

The next match for Brno will be in Prague against Vinohrady CC this Saturday, which is last in the league with three losses and one abandoned match so far this season. 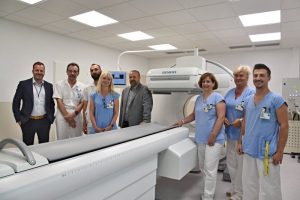 A connoisseur of the unpredictable and unscripted drama of sports.
View all posts by Bruno Zalubil →
« In Pictures: Brno Public Transport Drivers Trialling New Uniforms
The Employment Situation In The Czech Republic: How Does It Compare To The Rest Of The EU? »