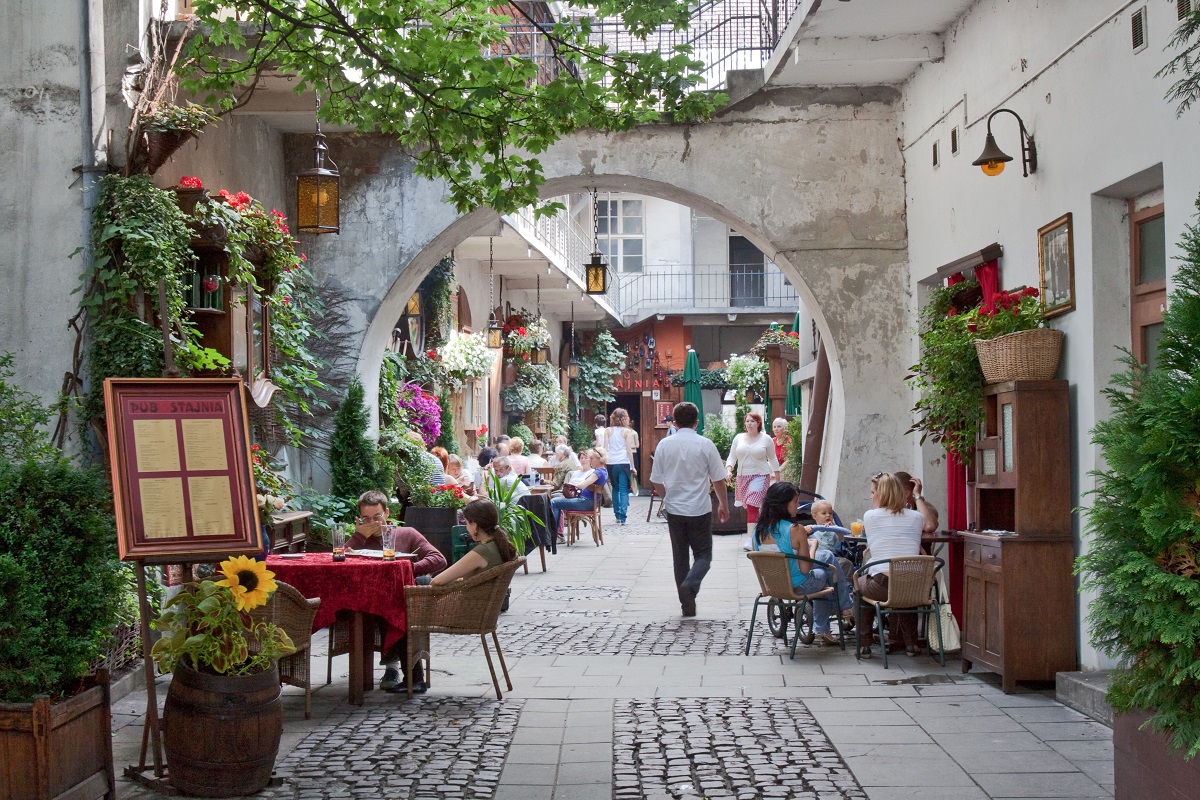 For the 13 year that I have lived in Brno, I have yearned for a decent bagel. When I lived in New York City, I had a bagel every morning, and sometimes for lunch, too. It is one of my favorite foods and it is one of the things that I most miss about living in the United States.

Then I went to Kraków. They sell bagels on the street!

Kraków, the 750,000-person second-largest Polish city, has bagels in their modern train station, on street corners throughout the medieval city center, in underpasses near mass transit junctions and next to the towering castle on the banks of the Vistula River. A bagel is an obwarzanek krakowski in Polish and it costs less than 2 zloty (or about 16kc). It is a little bit bigger than an everyday New York bagel, but it tastes just like what I remember from my days in Manhattan.

I did not expect my summer trip to Poland to result in tasty food, but everything I ate in Kraków was great, and the settings — a bench in Planty Park, the steps of the Old Synagogue — created low-cost memorable experiences.

Plus it is a great day when you can much on an obwarzanek while touring a beautiful city.

Kraków is northeast of Brno. In the summer it is packed with tourists. During the academic year, it is, like Brno, a student city with dozen universities and colleges and a lively nightlife for thousands of students.

The drive from Brno is 330 km and will take about three hours. My family I took the train this summer. It required one transfer and took about six hours. Our party had eight — four adults, a 15-year-old boy, an 11-year-old boy, a 4-year-old girl and a 2-year-old boy — and it cost less than 5000kc for round-trip tickets. (Pro tip: Always pack a lunch. Seating arrangements are not always maintained and things can get complicated when dozens of young people bound for the Colors of Ostrava festival get on board.) In any case, we had a cabin with a nice older couple from Peru. They were on a weekslong trip to visit Catholic churches throughout Europe and they gave my kids an interesting Peruvian nut bar.

The best introduction to a new city is to walk aimlessly and see what you find. Kraków is uniquely designed for safe roaming because it has a central core that is surrounded by Planty Park, a ring-road of grass, trees and bike paths that has replaced the ancient walls. It is hard to get completely lost.

The center is a lot like Staroměstské náměstí in Prague, although with wider and straighter streets. The core of the Kraków is the Main Market Square. The Cloth Hall has been the center of trade since the 13th century. Town Hall Tower offers a commanding view. St. Mary’s Basilica, which is in the corner of the square, dates back more than 600 years.

Horse-drawn carriages with attractive females sitting in the driver’s seat are lined up around the square. As soon as customers get on board, men appear and take control for the sight-seeing tour through the streets. Pigeons and small birds fly around the open space in amorphous blobs, barely clearing the heads as they take flight.

Rynek Underground is part of the Historical Museum of Kraków. It was built after five years of archaeological excavations and provides an interesting multimedia presentation of local history.

After strolling around, we gravitated to a sign for New York Pastrami. This is another favorite of mine, and something that I miss terribly about living so far from Katz’s Deli. We took the pastrami-on-rye sandwiches to the park just beyond St. Florian’s Gate, which was built in the 14th century and served as the Royal Route into the city for centuries. We sat on a bench and ate about 100 meters from a six-member brass band that was playing rousing songs for a semi-circle of dozens of tourists.

Be careful on the bike path. It is a great place to run, walk and relax, but there are Segways, motorized scooters and bicyclists who slalom recklessly through the tourists.

Wawel Royal Castle, which includes Wawel Cathedral, is at the bottom of the city center. It has been the home of Polish monarchs for more than a millennium. It is a large complex that is free to enter, with fees to access museums and interior spaces. It is a bit of a mishmash of architectural styles that have evolved throughout many reconstructions and additions.

At the base of the Wawel Hill and along the river, there is a statue of a dragon that breathes fire every few minutes. It represents the city’s creation myth, which is similar to that of the Brno dragon.

Collegium Maius is an interesting stop. It is the oldest building of the Jagiellonian Univeristy, which was established in 1364. When you stand in the courtyard, you can feel the centuries of intellectual thought.

Mass transportation is decent throughout the city. You buy the ticket in the tram or bus. The credit card scanners don’t seem to work and you need the perfect combination of change.

A visit to the zoo requires a bus because it is far from the center and up a significant hill; the buses are overcrowded and not frequent enough during the summer tourist season.

In any case, the zoo is decent, but not great. It seemingly has two of everything: two elephants, two lions, two giraffes. It is laid out in a grid that is not entirely appealing. (Brno Zoo is better.)

The Jewish Quarter has added meaning because Kraków is only an hour away from one of the most notorious Nazi concentrations camp: Auschwitz-Birkenau.

It has a much older history that stretches back many centuries. Many buildings still existing, including the Old Synagogue, the High Synagogue and the Isaac Synagogue.

Across the river, Ghetto Heroes Square is now an art installation to recognize that the spot was the starting point for deportation to the death camp. Not far away is Oskar Schindler’s Factory, where the crafty businessman (who grew up just north of Brno) saved the lives of 1,200 Jews during the Holocaust.

The Jewish Quarter feels like a young and hip urban area, with many restaurants and bars. On a summer evening, it is filled with young people.

We ordered pierogi for a takeout dinner. Pierogi are little dumplings of unleavened dough with a variety of fillings. While we waited, we found a small, enclosed street-side park to teach our kids to play hopscotch.

When we got our food, we decided to eat on the steps of the Old Synagogue. With Polish beer and drinks from a local minimart and live music from a nearby restaurant, we tasted more of Kraków’s excellent cuisine.

Of course, I also brought many obwarzanki back to Brno.

Facebook Comments
https://www.brnodaily.com/2019/09/01/family-and-kids/travel-experiencing-krakow-through-its-local-cuisine/https://www.brnodaily.com/wp-content/uploads/2019/08/Krakow_Kazimierz_KKPolish-National-Tourist-Office-1024x683.jpghttps://www.brnodaily.com/wp-content/uploads/2019/08/Krakow_Kazimierz_KKPolish-National-Tourist-Office-150x100.jpg2019-09-01T09:00:43+02:00Bruno ZalubilFamily and KidsTravelEU,Family and Kids,Poland,Travel TipsKraków is a beautiful city that is close enough to Brno for an enjoyable weekend trip. Photo: Kraków jewish quarter. Photo credit: Polish National Tourist Office. For the 13 year that I have lived in Brno, I have yearned for a decent bagel. When I lived in New York City,...Bruno ZalubilBruno Zalubilbzalubil@hotmail.comAuthorA connoisseur of the unpredictable and unscripted drama of sports.Brno Daily 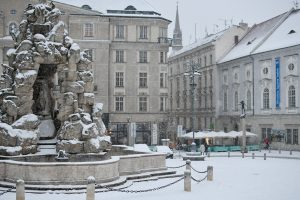 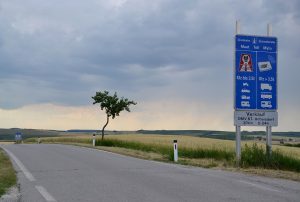 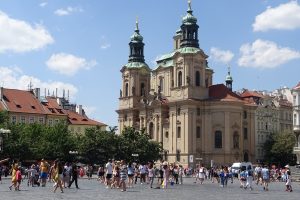 A connoisseur of the unpredictable and unscripted drama of sports.
View all posts by Bruno Zalubil →
« National Theater in Brno – English-friendly Drama, Opera and Ballet in September
What’s Up Brno? – Events in Brno, Week n°36 »