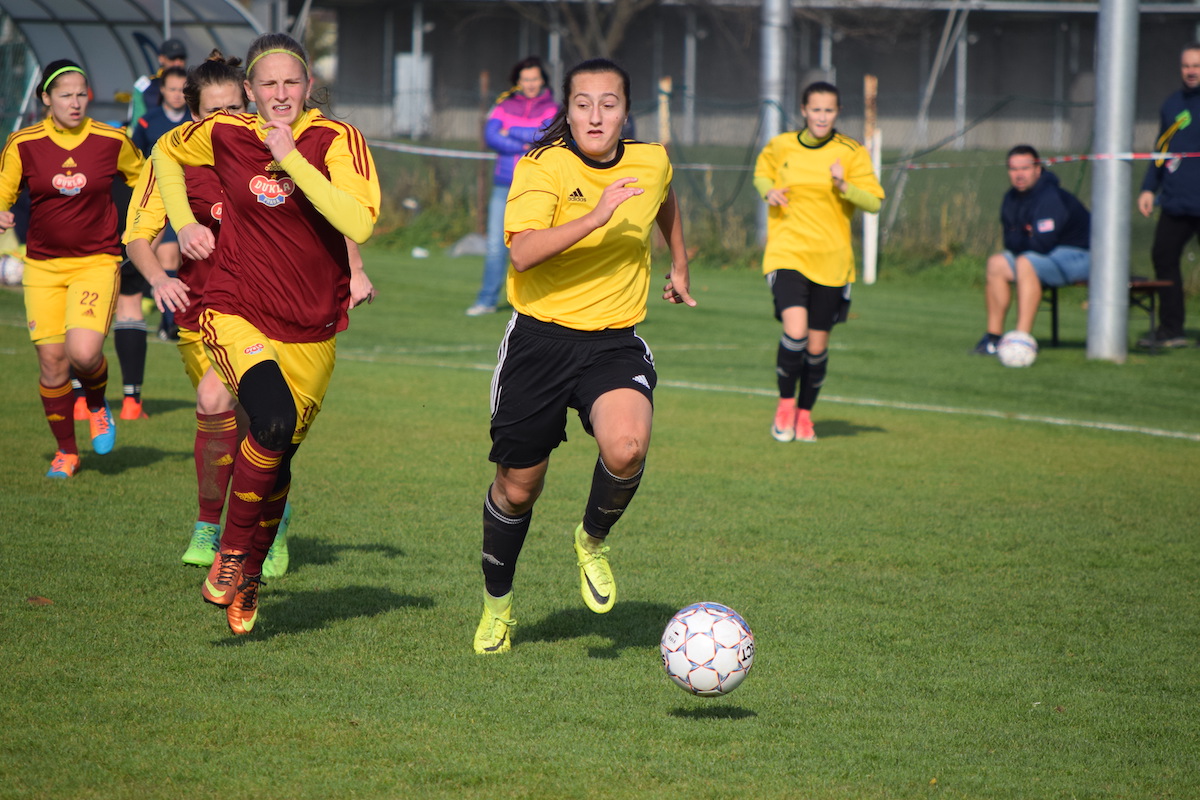 Lokomotiva Brno-Horní Heršpice has started its third season in the top league of the Czech Republic with two wins. They have played well against FK Dukla Praha, their opponent on Saturday, since 2017 (shown above). Photo credit: Pavel Škarpišek.

Brno, Sept 4 (BD) — FC Zbrojovka and SK Líšeň will play each other Sept. 14 with identical records; HC Kometa hockey season is two weeks away; and the Brno sports results and schedule.

In South Brno, there is a team that carries the banner for women in sports. It is little known and the games are sparsely attended.

Nevertheless, Lokomotiva Brno-Horní Heršpice is in the top league of women’s football and they are establishing themselves as a top team. They have won their first two games, both on the road, to start this season.

Lokomotiva will play its first home game of the season this Saturday when they host FK Dukla Praha. The game starts at 11 a.m. Admission free. The field is at Sokolova 2 in Horní Heršpice.

There were many obstacles that the team has so far overcome. The organization did not have enough money to bring in any international players for support. It lost a talented young player, Laura Žemberyová, to Slavia. And the team is now on its fourth head coach in three seasons: Jaromír Piták (the goalkeeper coach last season) now leads the team with assistant Miloslav Krištof.

Nevertheless, Lokomotiva has found a way to win with homegrown players. Tereza Krištofová remains the longtime captain. Desana Dianišková , who scored four goals in an important game against Hradec Králové in mid-April, is also back. And, last year’s second team, which won the Czech Cup, beating Viktoria Plzeň, 5-1, in May, has proven to be a nice feeder of talent for the top team.

Lokomotiva opened the season in Uherské Hradiště, beating 1. FC Slovácko, 1-2. It was a rematch of an April game that put Slovácko in the top bracket and Lokomotiva in the lower bracket for the spring portion of last season. It was played in front of a league-high crowd of 723 fans. The win was not against a weakened team; four of the Slovácko players are on the extended roster for the Czech national team, including goalkeeper Barbora Růžičková, who made the National Team Squad.

In the second round, Lokomotiva travelled to beat league-newcomer FK Pardubice, 0-1.

There are eight teams in the women’s top league. SK Slavia Praha (2-0-0) and AC Sparta Praha (1-0-1) are the traditional powerhouse teams in the league; Slavia won the first derby between the teams on Aug. 24. (The Prague teams’ players make up most of the Czech national women’s team, which travelled to win 0-7 in Moldova last Friday but was forced to cancel its Tuesday night game against Poland in Uherské Hradiště because of a mysterious intestinal illness that ravaged the team.)

The top women’s league season has 14 rounds, with home and away games against each team. The 11th round is in mid-November; the final three rounds pick up in mid-February. Then the top four teams in the standings play for the league title, while the bottom four teams play to stave of relegation.

Lokomotiva dominated the second league of women’s football in 2016-17 in order to earn promotion into the top league. It was a tough transition. Though the team always seemed on the verge of moving forward, they never could score the key goal in order to win the key game. In 2017-18, they finished last on the final day of the season, but their top-league existence was maintained because another team did not want to move up.

In 2018-19, Lokomotiva struggled through the fall season. For the winter, they added two international players, particularly American Tess Andujar, and finished the spring season on a roll that has continued into this season.

FC Zbrojovka head coach Pavel Šustr again made the right move when he tapped newcomer Jakub Černín to enter the game at FK Fotbal Třinec on Saturday morning because it took just 10 minutes for Černín to score the equalizing goal that led to a 1-1 tie and a point in the standings.

The goal came in the 64th minute. It was a header off of a Šimon Šumbera corner kick.

Both of the Brno teams are now 2-4-1 from seven games and stuck in the middle of the Fortuna:Narodni Liga standings.

After a weeklong international break Líšeň will travel to Zbrojovka on Saturday, Sept. 14 for a huge rivalry game that will start at 1 p.m. Tickets are on sale now.

Last Wednesday, Zbrojovka survived an extra-time battle in a MOL Cup game at FC Odra Petřkovice, 3-4. Šimon Šumbera scored two first-half goals, but it wasn’t enough. Jan Pázler, a new striker with the team for just more than a week, scored the next two goals. The final one was in the 105th minute and completed a fast break by Peter Štepanovský and Ondřej Pachlopník.

SK Líšeň had little trouble advancing in the MOL Cup. They traveled to SK Tatran Ždírec nad Doubravou and won 0-4 last Wednesday. Defender Václav Minařík scored goals at 27 and 30 minutes. Marek Vintr converted a penalty at 73 minutes. And Martin Zikl finished things off with a goal in the 79th minute.

If you need another reminder that the summer is coming to a close, here it is: HC Kometa begins its 2019-20 Tipsport extraliga season at HC Verva Litvínov on Friday, Sept. 13.

The first home game is Sunday, Sept. 15, when defending-champion HC Oceláři Třinec comes to town for a 5 p.m. start.

The Brno Sports Report is published every Wednesday. All dates and times are subject to change. Most of the stories are about the traditional “English-speaking” team sports — football, hockey, baseball, basketball, American football, cricket, rugby, etc. — but it is also about the interesting local spectator and participation sports — tennis, badminton, running, horse racing, swimming, rock climbing, biking, etc. If you have any suggestions for what should be included, please comment below or send an email to bruno@brnodaily.cz

https://www.brnodaily.com/2019/09/04/sport/brno-sports-weekly-report-lokomotiva-looks-to-continue-winning-streak/https://www.brnodaily.com/wp-content/uploads/2019/09/Lokomotiva040919-1024x683.jpghttps://www.brnodaily.com/wp-content/uploads/2019/09/Lokomotiva040919-150x100.jpg2019-09-04T10:05:04+02:00Bruno ZalubilSportBasketball,Brno,Czech Republic,Hockey,SportLokomotiva Brno-Horní Heršpice has started its third season in the top league of the Czech Republic with two wins. They have played well against FK Dukla Praha, their opponent on Saturday, since 2017 (shown above). Photo credit: Pavel Škarpišek.Brno, Sept 4 (BD) — FC Zbrojovka and SK Líšeň will...Bruno ZalubilBruno Zalubilbzalubil@hotmail.comAuthorA connoisseur of the unpredictable and unscripted drama of sports.Brno Daily

A connoisseur of the unpredictable and unscripted drama of sports.
View all posts by Bruno Zalubil →
« Average Wage Exceeded CZK 34,000 for the First Time, 2/3 of Population Earns Less
Dornych Closure Shortened by Several Months. Workers Now Move to Plotní »