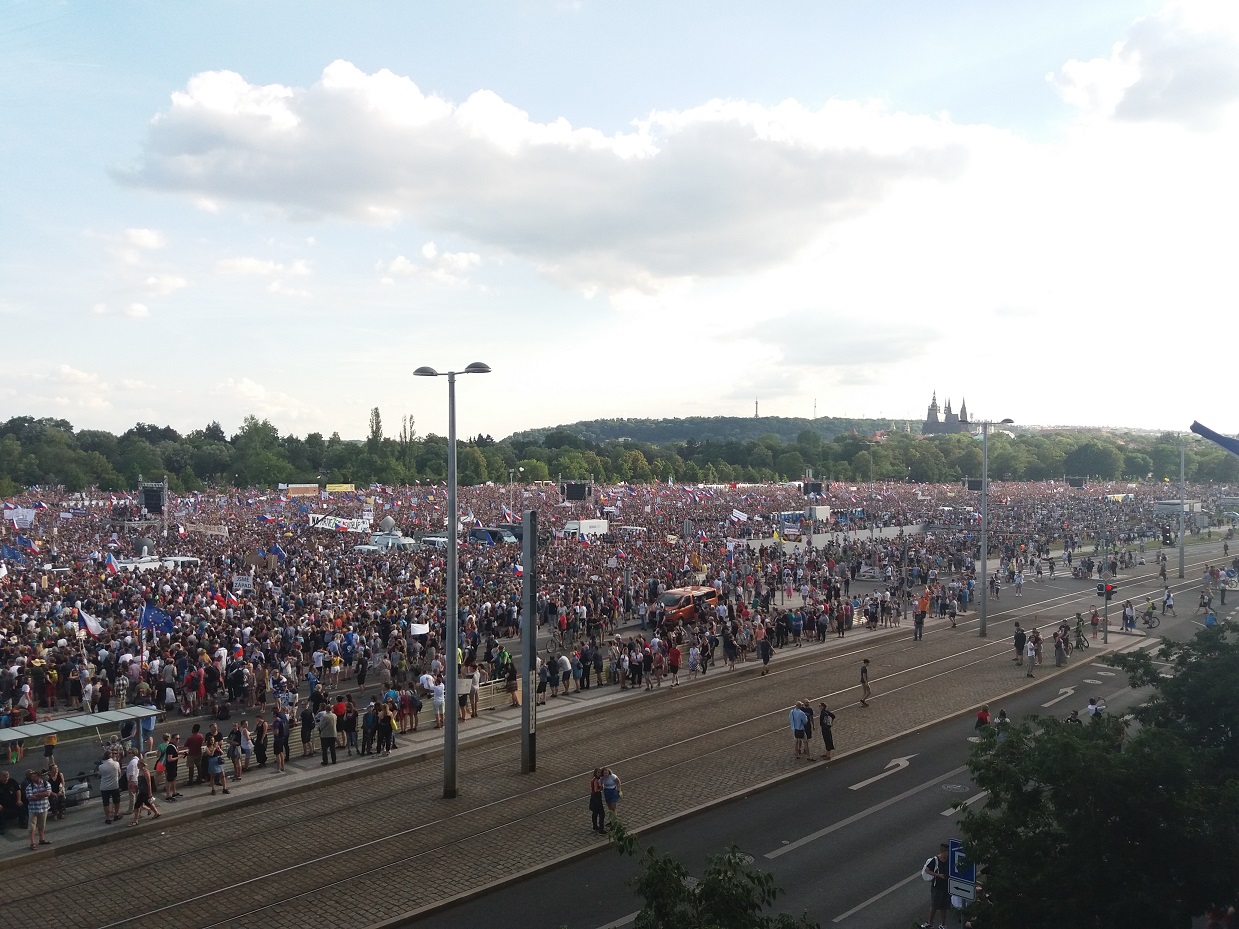 The continuing investigation into the February 2018 murder of journalist Ján Kuciak and his fiancée has revealed a deep network of corruption at the heart of the Slovak establishment, linking senior politicians, police, and members of the judiciary to underworld business figures and organised crime syndicates. Photo: Large protests in Prague’s Letná Park this June. Credit: JS.

Czech rep. / Slovakia, Sep 18 (BD) – When reporting on Slovak politics, international media have tended to focus on Zuzana Čaputová’s surprise election in June as the country’s first female president, which was rightly heralded as a sea-change for the region. However, for the last 18 months Slovakia has been convulsed by political developments sparked by the February 2018 murder of investigative journalist Ján Kuciak and his fiancée Martina Kušnírova, which may yet have even further-reaching consequences for the Czech Republic’s brother country.

Kuciak and Kušnírova were killed at their home in a village 65km east of Bratislava on 21 February 2018. Prior to his death, Kuciak had been investigating links between the Italian mafia and Slovak political and business figures. The initial shockwaves caused by the murder caused a political crisis, resulting in the biggest protests in Slovakia since 1989, and the resignation of Prime Minister Robert Fico, as well the Interior and Culture Ministers and the President of the Slovak Police. However, the governing coalition led by the SMER-SD party stayed in power, with Fico remaining as party leader while Deputy PM Peter Pellegrini became the new Prime Minister.

Five people were arrested for the murder in September and October 2018, inluding Marian Kocner, a well-known oligarch who had been the subject of several of Kuciak’s investigations and had previously threatened Kuciak personally. All but one of those arrested denied any wrongdoing.

However, since then the investigation of the murder by special prosecutors, as well as efforts by Kuciak’s colleague to continue his investigations in his place, have unearthed a network around Kocner linking senior politicians from various parties, senior police and members of the judiciary with organised crime figures in Slovakia and the Italian mafia. Any connection with Kocner has become toxic in the wake of the investigations, and several senior figures have resigned as evidence of such connections has come to light.

The special prosecutors announced in August that they had extracted tens of thousands of messages from Kocner’s phone with “representatives of state bodies and the justice system”, indicating regular contact between Kocner and senior politicians, including Prime Minister Robert Fico. (Fico and Kocner were until September 2017 neighbours in a luxury apartment complex owned by Ladislav Basternak, since jailed for tax fraud). Many of these messages were then published in Slovak media, in which Kocner discusses his influence on government figures with his business partners, as well as corresponding with Alena Zs, the woman charged with directly ordering the killings. He also sent jokes about Kuciak’s murder to his associates, and commented that if they couldn’t keep SMER in power they would “all go to jail”. Deputy Justice Minister Monika Jankovska resigned under political pressure on 3 September, after messages were published in which Kocner refers to her as his “monkey”, and his pawn in the justice ministry. Jankovska was also among several senior political figures whose phones were seized as part of the investigation, but she denies any wrongdoing.

The ongoing revelations have caused fresh outrage in the country. In a statement, activist group For A Decent Slovakia [“Za slušné Slovensko”], organisers of a series of anti-government demonstrations, stated that: “Slovakia has been a mafia state where people like Kocner dictated the most important decisions in the country. A system like this cannot be built in a day. It has been created by the 12-year-long government of Robert Fico and his minions, a government with no respect for law and for basic democratic principles.” The Council of Europe’s anti-corruption body, GRECO, urged Slovakia to take urgent action to address high-level corruption in the country.

Now tens of thousands of protesters are expected to turn out at protests in cities across Slovakia on Friday, organised by For A Decent Slovakia. On the Facebook page for the event, the group notes that many of the demands of their initial protests were achieved, and restates their second demand: “A government that is based on democratic principles and has no links to organized crime. A government that can restore people’s trust in state institutions.” They add that: “We want to express our support to all honest police and prosecutors. Without them, it would not be possible for the investigation to progress independently. Let’s stand by them, because we know how much political and social pressure they are under. Like journalists who continue to uncover the truth, despite blacklisting, threats and disrespect from state officials.”

Eyes are also now turning to the upcoming parliamentary elections, due in March 2020. A no-confidence vote called by opposition parties against Pellegrini’s government this week failed, but SMER’s previously dominant lead in the polls is falling with each new revelation, and pro-EU liberals and anti-corruption opposition parties are hoping that they can capture power, buoyed by President Čaputová’s election success earlier this year. However, also waiting in the wings are the far-right, promising to solve corruption in their own way, with “order”. Far-right candidates took a combined 25% in the first round of the presidential election, and Marian Kotleba’s LSNS party is currently third in opinion polls.

Under Fico, Slovaks have experienced over a decade of firm, almost single-party rule. But even if SMER’s voters are now disaffected and looking for other options, it remains to be seen whether they will choose the optimistic young anti-corruption campaigners of Slovakia’s city squares, or go looking for a different kind of strong leader.

https://www.brnodaily.com/2019/09/18/news/politics/large-protests-planned-across-slovakia-on-friday-in-response-to-continuing-corruption-revelations/https://www.brnodaily.com/wp-content/uploads/2019/06/protest-babis-jack-6-1024x768.jpghttps://www.brnodaily.com/wp-content/uploads/2019/06/protest-babis-jack-6-150x112.jpg2019-09-18T07:24:09+02:00Jack StephensCzech RepublicPoliticsPolitics,Protest,SlovakiaThe continuing investigation into the February 2018 murder of journalist Ján Kuciak and his fiancée has revealed a deep network of corruption at the heart of the Slovak establishment, linking senior politicians, police, and members of the judiciary to underworld business figures and organised crime syndicates. Photo: Large protests...Jack Stephens jack.stephens50@gmail.comAuthorA writer and English teacher originally from London who has lived in Brno since 2011, interested in politics, low culture, and all things strange and/or Czech.Brno Daily 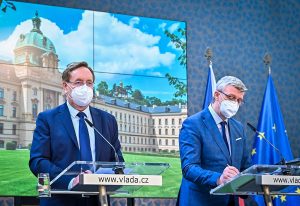 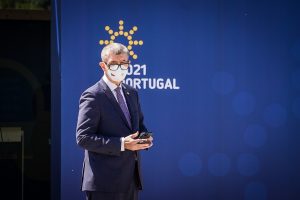 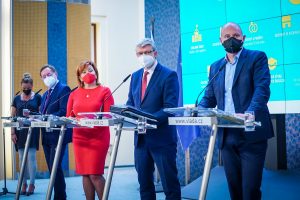 Compensation Bonus And Subsidy Programs To Be Extended