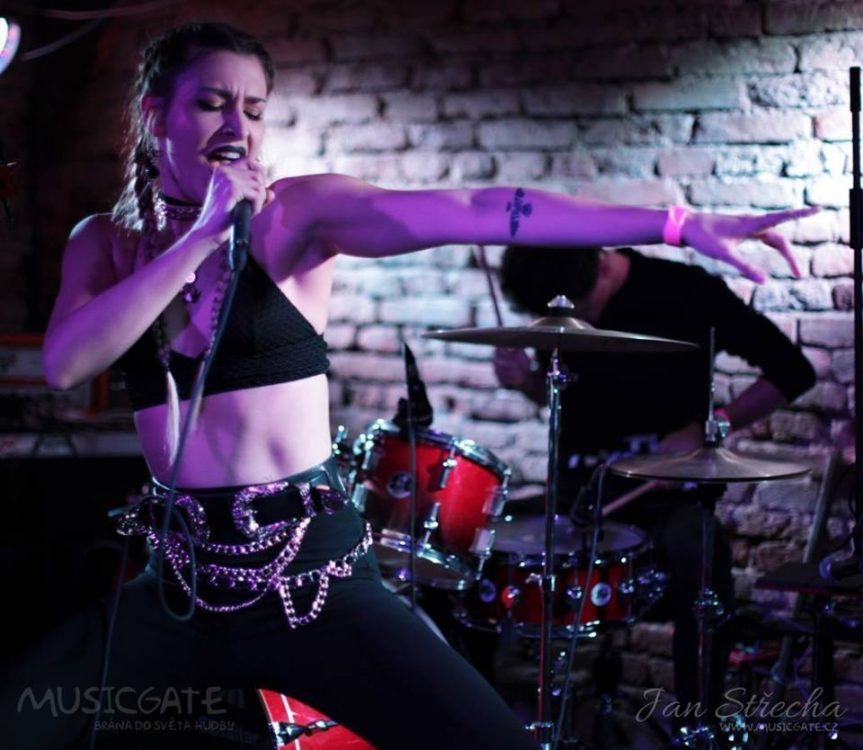 “Imagine if Led Zeppelin and Kanye West had a child” That’s the way this Slovak band describe their own sound. Now I don’t like Kanye West, but Led Zeppelin? If you’re bold enough to compare your sound to them, I’ll give you a shot. Photo credit: The Youniverse.

Brno, Sep 30 (BD) – And give them a shot I did. It didn’t take much effort, The Youniverse have a captivating style and a polished sound on record. They had me hooked with the track “Master Printer” from their latest album “Cmyk”, and I knew I wanted to see them live on their European tour, which made its only stop in Brno at Music Lab last Thursday.

Doors were at 9pm; the band started at 9:15 sharp and delivered over an hour of their rock-blues-rap fusion sound, with songs like “Riverbanks” captivating the audience thanks in no small part to a visual spectacle from their singer, who energetically committed to her performance and managed to bring the mood up and light up an audience that seemed a bit shy at first. At times she sounds like Amy Winehouse and at others like M.I.A, but she owns the stage like Freddy Mercury, which is something to see.

After a two-song encore the band left the stage and went on to drink and mingle with the rest of the mere mortals. That was when I had the chance to catch Tammy, lead singer and “Tambourine” of the band, to ask her a couple of questions:

BD: What’s your role in the band?

Tammy: On stage I sing, play the harmonica, tambourine, scream a lot, throw my body on the stage. I co-write all the songs with the guitarist, co-produce, and mix. I also direct the videos.

BD: Tell me a bit about the history of the band.

Tammy: We got together through our families. We have a lot of history but we have had this line-up for two and a half years. It was like fate, every member that we have now was brought by the Universe.

BD: What are your influences and what kind of sound are you trying to achieve?

Tammy: Our influences are heavily based in blues, from the 30s and 50s, we try to go for the vintage feeling but make it corky, we try to fuse it with the modern things we like, like hip-hop and rock from the 60s from powerhouses like the Rolling Stones.

Tammy: I really like and respect everything he does.

BD: What’s the present and the immediate future of the band?

Tammy: We’re recording a new album. The first singles come out in early November along with their music videos; we want to tour Europe after that and hopefully cross the ocean sometime next year.

My honest recommendation overall? Keep an eye, and ear, on this band. They are seriously underrated and may well soon surprise you with a well-earned take off. Follow them on Instagram (@theyouniverseofficial) to keep up with exactly when and where they’re playing next.

https://www.brnodaily.com/2019/09/30/pop-culture/the-youniverse-rocked-brno-with-a-strong-musical-offering-last-thursday/https://www.brnodaily.com/wp-content/uploads/2019/09/Praha-e1511804338956.jpghttps://www.brnodaily.com/wp-content/uploads/2019/09/Praha-e1511804338956-150x130.jpg2019-09-30T15:04:11+02:00Carlos MorenoPop CultureBrno,Czech Republic,Events in Brno,Music“Imagine if Led Zeppelin and Kanye West had a child” That's the way this Slovak band describe their own sound. Now I don't like Kanye West, but Led Zeppelin? If you’re bold enough to compare your sound to them, I’ll give you a shot. Photo credit: The Youniverse. Brno,...Carlos MorenoCarlos Morenomorenomendoza2016@gmail.comAuthorCarlos Moreno is a writer with a passion for Comedy and Social Media, he runs the projects Desperate Comedians and Meeting with a Meaning in Brno.Brno Daily

Carlos Moreno is a writer with a passion for Comedy and Social Media, he runs the projects Desperate Comedians and Meeting with a Meaning in Brno.
View all posts by Carlos Moreno →
« Latest Development in Brno’s Bid To Host the European Youth Olympic Festival in 2025
Ministry of Transport Rules That Electric Scooters Cannot Be Ridden On Sidewalks »