5 Things Brno Does Better Than Prague 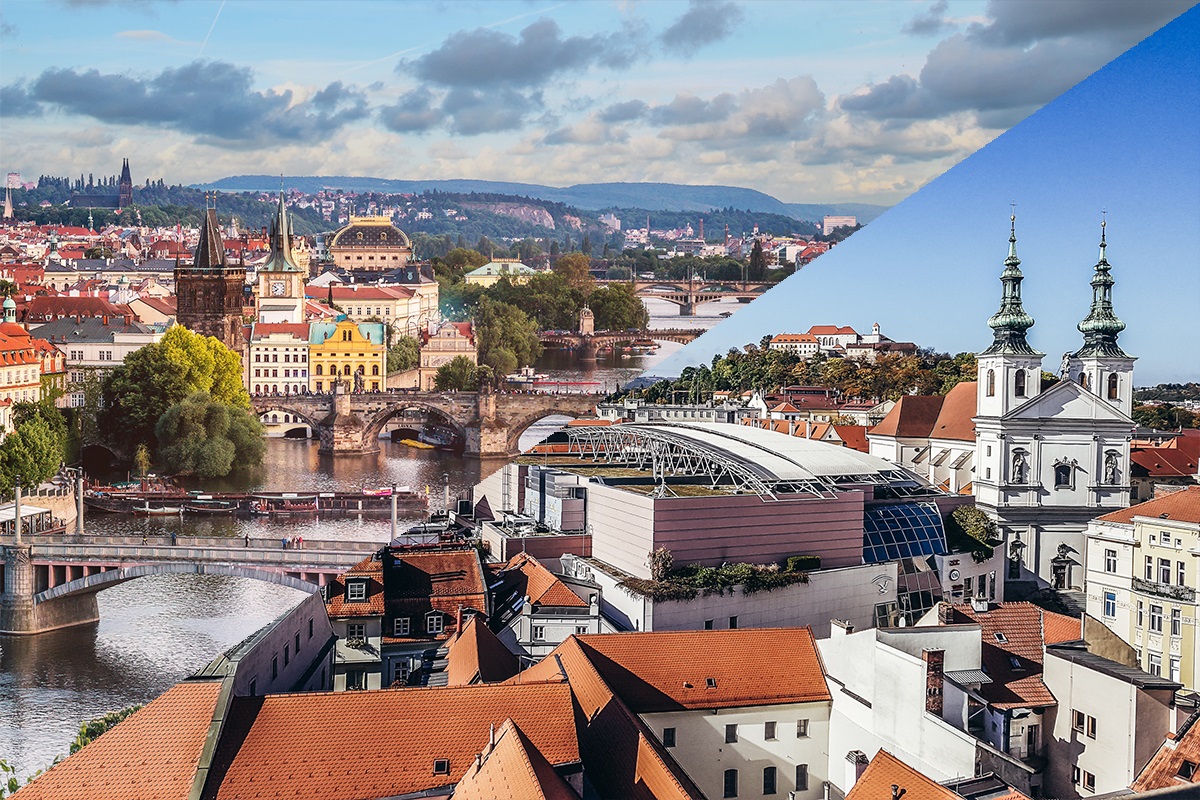 This article contains the personal opinions of the author. As we can never accurately measure subjective experiences and impressions of cities, discretion is advised; try not to hate me if you’re a Praguer, and don’t read too much into it if you are from Brno, but share your thoughts and respect the views of others. We are living in the 21st century and we are the product of millions of years of evolution, so let’s behave like it, even on the Internet!

One of my most frequent opening lines whenever I’m performing in Prague is: “I came to Prague for the language but stayed for the customer service… said no one ever.” After over 27 months in the Czech Republic it does not get old.

I remember the first time I ever came to Brno. A stand-up comedy group based in Prague brought me to perform along with two other comics about two years ago, to perform at Art Bar Druhy Pad. When I went to get myself a beer to calm my nerves before the show like the good noob that I was, surprise, surprise, I was treated by the waitress with a human kindness that was just OK by North American standards (yes North America includes Mexico) but felt a little bit like home to me after having experienced the (in)famous customer service in Prague.

That night we performed in front of around 60 people and I crushed it, we all did. It was my first “big” out of town gig, and I was honestly surprised by the warm and energetic reception.

This is not a comedy article so why am I mentioning this? Well, to show you the importance of a crowd. A crowd made of locals, presumably, or at least with a good portion of them, as I later confirmed when socializing after the show. Crowds are very representative of their culture, and their character; just go to a concert in Mexico, you’ll barely hear the music over the singing and cheering of the crowd. That’s just how we are, intense when it comes to showing our affection and appreciation to the art we like.

Back then, Brno people, at least the young people, gave me an impression of being way nicer than their comrades in Prague, and they still do. After living a couple of months in this city I can see that those good vibes are something that echoes across the city. Just go to the square behind Sv. Jakub’s church to have a beer in the summer, you’ll feel like you’re in a port city in Portugal where you can talk to anyone. Hell, even in the Billa near my place the guys and girls working there actually smile and seem eager to talk to you in English. Those things are hard to find in Prague, in my experience.

Truth be told I can’t speak for every district in both cities, and I’m sure there are contrasts all around, but I can talk about the city centers, the old towns, let’s say. The cleanliness of Brno Stare Mesto is, quite literally, a breath of fresh air compared to the dirty old town usually on display in Prague. It reminds me of Vienna ‘s old town, majestic and clean; the architecture is obviously different but there are some imperial traces in it as well, of course. It reflects really well on the citizens and their habits, for sure, and it’s a delight to walk along clean streets looking at beautiful historical buildings with fresh vibrant colors and almost no graffiti.

On the other hand I always liked Prague for being a little dirty, it’s part of the old girl’s charm and grit. The way I see it, when you’re a capital city you can’t escape, so you might as well wear it with pride. Of course it’s not the most desirable characteristic, and there are examples, like Vienna, of capital cities with a much better record of cleanliness, but hey, just like Mexico City or New York, there is so much happening in Prague that it’s hard to blame the city or its citizens. Which is of course not to say that there is nothing going on in Brno, because there definitely is as we all know, just that there will always naturally be more going on in the capital.

Oh boy have I enjoyed Brno prices. The cost of living is significantly lower than “over there”, and I’m completely on the Brno side for this one, go Brno! Everything here seems to be cheaper, at least everything I have paid for in both cities. Let’s start with the rents. Anyone who has lived in Prague in the last three years knows that it’s a nightmare; the market has gone so insane that not even Czechs are able to find places at decent prices.

My last room in Prague was a sad depressing little room in a sad depressing little apartment shared with two other people who never talked to each other, located 30 minutes by tram from the city center, that cost two thirds of my salary. Getting a decent room for a decent price in Prague is like finding a unicorn, and you’ll have to be a raccoon and go through a lot or garbage first to find it. But it is possible, as I had it once, so if you’re looking for a room in Prague, know that you have to be in the city, and invest your time and effort every day.

I remember when I was preparing to move here to Brno, I thought, “Well, I have to be there and it’s going to take a long while, so I might as well book a week in a hostel and dedicate every morning of every day to room hunting and hope, just hope that it will be affordable, not so far away from the center, and available, and they won’t want three deposits plus an agency fee plus two rents in advance plus my work contract plus my pet’s death certificate with apostille and officially translated to Czech.” (Rest in peace, Goliath, you brave sausage dog.)

So on the first day I arrived, I went to see my first room and it’s where I’ve been living for the last two months, enough said. Greetings to my Ukrainian flatmates if you’re reading, you guys are cool.

On top of that, as to be expected, basic things like beer, food, and public transport (in that order) are also cheaper, so yay Brno.

Definitely one of the perks of living in a village – it’s not a village but let them think that because it will keep them away for longer – is the absence of masses of tourists occupying the city, especially the center. So if, while taking a stroll through the center of your city, you really like the beer bike groups chanting in your ears every time you turn a corner, while at the next corner you are almost run over by a drunk idiot on a scooter, and after that you get your eyes poked out by the million selfie sticks from large groups of Asian tourists who move like shoals of fish to randomly block roads and passages, don’t come to Brno. You won’t find that here.

And with that comes the priceless silence at night. It doesn’t mean it’s dead – hell, this city has a great night life, definitely more compact but still offering everything from traditional Czech pubs to karaoke and theme bars, theaters, kinos, underground bars, sports bars, clubs, and so on and so on (check out my other article about that here) – but you can get all that without having to endure the packs of drunk “I’m going out to hunt for easy Eastern European girls” British, Germans, and Americans. I know those charming gentlemen really sing very well and the giant genitals costumes they wear for their stag parties are graceful and hilarious, but unfortunately we don’t see them here.

Overall it was just a complete surprise to me to actually be able to walk around the center normally, and to do so without any of the above. Never sell your body to the night, Brno.

You don’t need me to tell you why this is so, better to read an article about it right here. This one is actually based on facts like surveys and statistics and is not just a subjective blurp like what you just read, which I hope you have enjoyed. Feel free to vent your rage in the comments in an unnecessarily long rant if you must, and if it will keep you from murdering a real person. I will be happy to read you all.

Facebook Comments
https://www.brnodaily.com/2019/10/10/column/5-things-brno-does-better-than-prague/https://www.brnodaily.com/wp-content/uploads/2019/10/prbr-credit-casadei-graphics-1024x683.jpghttps://www.brnodaily.com/wp-content/uploads/2019/10/prbr-credit-casadei-graphics-150x100.jpg2019-10-10T09:14:40+02:00Carlos MorenoColumnBrno,Brno Expats,Expats Czechia,Lifestyle and Fashion,PragueTitle graphics: CG / Brno Daily. This article contains the personal opinions of the author. As we can never accurately measure subjective experiences and impressions of cities, discretion is advised; try not to hate me if you’re a Praguer, and don’t read too much into it if you are from...Carlos MorenoCarlos Morenomorenomendoza2016@gmail.comAuthorCarlos Moreno is a writer with a passion for Comedy and Social Media, he runs the projects Desperate Comedians and Meeting with a Meaning in Brno.Brno Daily

Br(u)no: So What is Your (Conspiracy) Theory?

Carlos Moreno is a writer with a passion for Comedy and Social Media, he runs the projects Desperate Comedians and Meeting with a Meaning in Brno.
View all posts by Carlos Moreno →
« Sokol Movement Celebrates Its Memorial Day in Brno
New Working Group To Help Improve Water Management In Brno »