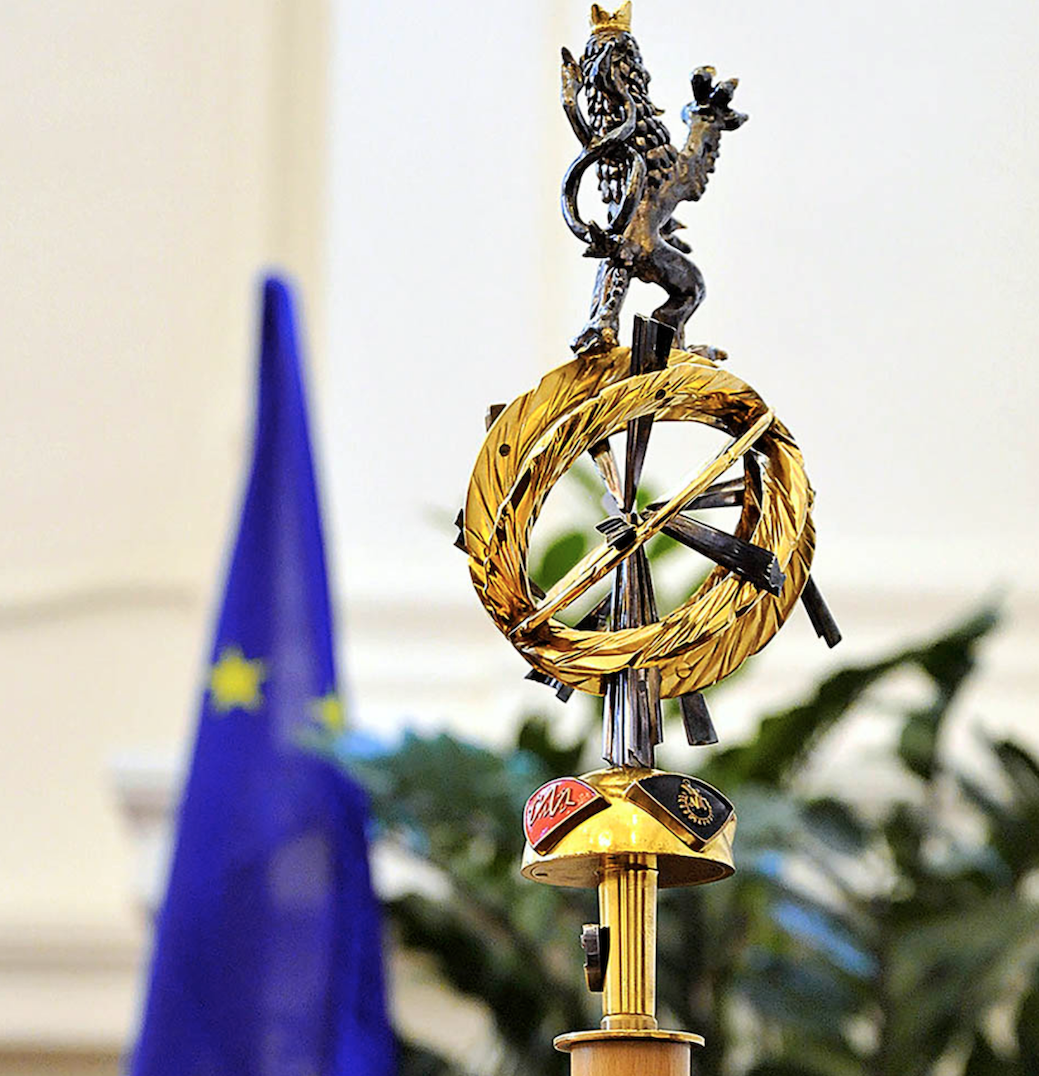 The special week-long exhibition at the Moravian Museum in Dietrichstein Palace on Zelny Trh will display historical insignia from six Brno universities, and other historical decorative items connected to the City of Brno and the South Moravian Region. The exhibition, which is free of charge, will run from 16th to 24th November. Photo credit: brnouniverzitni.cz.

Brno, Nov 12 (BD) – An extraordinary exhibition of rectors’ and deans’ insignia and historical artefacts, as well as original exhibits, opens on November 16th at the Moravian Museum in Brno, and will run for one week only. The collection will include 37 display cases of majestic gowns, scepters and chains belonging to rectors and deans, as well as other symbols and documents of six universities based in Brno: Brno University of Technology (est. 1899), the University of Veterinary and Pharmaceutical Sciences (1918), Masaryk University (1919), Mendel University (1919), the Janáček Academy of Music and Performing Arts (1947), and the University of Defense (1951). This unique exhibition is a follow-up to short exhibitions in 1994, 1999 and 2000, when the insignia were last seen together as part of the “Brno: University City” project.

The university insignia will be accompanied by mayoral and gubernatorial ceremonial chains and other symbols and historical documents of the City of Brno and the South Moravian Region. The guarantors of the project are the rectors of the six universities whose insignia form part of the exhibition, as well as Brno Mayor Markéta Vaňková and the Governor of South Moravia, Bohumil Šimek. “I am very glad that the exhibition is being held this year after 19 years, as we are celebrating 30 years of freedom, and also commemorating the 80th anniversary of the closure of Czech universities in 1939. It is symbolic that the universities will be together again,” said Mayor Markéta Vaňková. She added that she would like to see the exhibition repeated more often in the future.

The first part of the exhibition will be symbolically devoted to the events of November 17th, 1989, on the anniversary of the Velvet Revolution, and the 80th anniversary of the closure of Czech universities during the Nazi occupation in 1939. The organizers at the Moravian Museum recommend combining a visit to this free exhibition with the permanent exhibition “Moravia in the 20th Century” on the third floor. Tickets for the permanent exhibition are available at the museum box office.

The project is being coordinated by the Moravian Museum in collaboration with advertising company SNIP & Co, with financial support from the City of Brno and the South Moravian Region, as well as private companies. The project also received active support from the six participating universities, and other institutions including the Brno Technical Museum and the Brno City Museum.

THE IMPORTANCE OF UNIVERSITY INSIGNIA

Since the Middle Ages, insignia have been a hallmark of universities. Initially they reflected the high status of universities in medieval society; in modern times they are a symbol of the dignity and rights of the university and their function is primarily representative.

University insignia include mainly scepters, chains, and gowns, which serve to honour academic dignitaries. Insignia are used in graduation ceremonies, the inauguration of rectors, honorary doctorates and other ceremonial university events, as well as representing the university to the public.

The traditional way that a university adopted its basic insignia was by dedication to the founder of the university.

Entrance: Free, though capacity is limited. For more information, check out the exhibition website.

https://www.brnodaily.com/2019/11/12/culture/insignia-and-historical-artefacts-of-brno-universities-to-be-exhibited-publicly-for-the-first-time-in-20-years/https://www.brnodaily.com/wp-content/uploads/2019/11/Insignia-and-Historical-Artefacts-6-1-989x1024.pnghttps://www.brnodaily.com/wp-content/uploads/2019/11/Insignia-and-Historical-Artefacts-6-1-145x150.png2019-11-12T14:43:06+01:00Jack StephensArt & CultureBrno,Czech Republic,Events in Brno,Things To Do in BrnoThe special week-long exhibition at the Moravian Museum in Dietrichstein Palace on Zelny Trh will display historical insignia from six Brno universities, and other historical decorative items connected to the City of Brno and the South Moravian Region. The exhibition, which is free of charge, will run from 16th...Jack Stephens jack.stephens50@gmail.comAuthorA writer and English teacher originally from London who has lived in Brno since 2011, interested in politics, low culture, and all things strange and/or Czech.Brno Daily

Brno, Czech Republic, Events in Brno, Things To Do in Brno

A writer and English teacher originally from London who has lived in Brno since 2011, interested in politics, low culture, and all things strange and/or Czech.
View all posts by Jack Stephens →
« Three Teenagers Caught On Camera Setting Light To Rubbish Bin In Train Station Underpass
Czech Managers Take 5% Fewer Sick Days Than Manual Workers. Insurance and Automotive Industries Report Most Absenteeism »