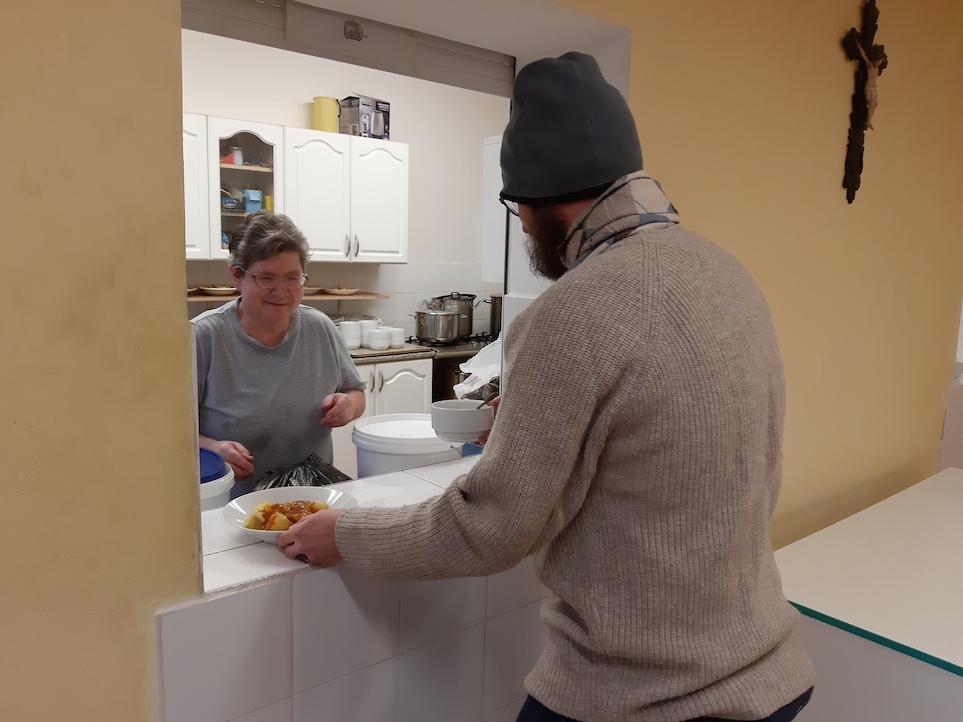 It was the last warm day of the year when I went to the homeless shelter on Bratislavská. I was there to meet the coordinator, Zuzana Csontosová, and find out more about what the charity does. She was out front when I arrived, unloading bags of donated clothes from the back of a white minivan.

“Hello, you must be Lee,” she said as I approached.

We shook hands and I helped Zuzana and her colleagues take the bags of clothes and shoes inside. It was a bumper stash of clothes from collection bins and companies around the city today, she told me. Some months they hardly receive any donations, but with the cold weather coming and Christmas approaching, people tend to be more charitable.

I was glad for the friendly greeting and the chance to help with the bags because I was a bit apprehensive about the visit. If I’m honest, I often find homeless people in Brno quite intimidating. I suppose it’s largely because the symptoms of their predicament are often so alarmingly apparent, and I simply don’t know how to deal with that. In short, I thought it was going to be really grim and depressing.

My concerns were almost immediately dispelled when Zuzana took me through to the day room, where clients come to get some warmth and a hot meal, have a shower and pick up some new clothes. While predictably spartan, the room is well heated and decorated in soothing colours. There are pictures on the wall and books on the shelf, and it feels welcoming.

The room seats twenty, and the centre caters for around 100 clients a day. It was lunchtime when I arrived, and the kitchen staff were handing out steaming bowls of guláš with boiled potatoes. Most of the food served here is leftovers from schools and a few monasteries around the city. It keeps the costs down and reduces waste, so everyone’s happy.

We stopped by the reception desk in the middle of the room. This is where clients check-in to receive their meal and a drink. The first ten visits are for free, then afterwards they pay 10 Kč for the food. It’s a symbolic fee, Zuzana told me, to give them a sense of responsibility and dignity from paying their way.

After they’ve eaten, they have a chance to socialize, relax, take a shower, and pick out some new clothes. Mondays and Fridays are clothing days, and clients can choose up to four items, depending on their needs. Some stuff is rarer than others, and the centre prioritizes certain situations, like if a client has been beaten up and their clothes are covered in blood, or if they have a job interview and need something smart to wear.

The clients are also offered counselling with one of the centre’s social workers, who will move quickly to identify each person’s situation. Some people living on the streets have lost benefits due to various reasons. While many are entitled to some government assistance, they can lose payments for up to six months if they miss so much as one appointment. This can easily happen when you’re sleeping rough. It’s hard to keep track of time, especially for people suffering from mental issues. Or someone might rob them and steal their ID, so they won’t get seen even if they make the meeting on time. Some become so disillusioned with the system that they give up trying, so the centre’s social workers will help them get back in the loop and, hopefully, working towards getting on their feet again.

I ask what is the most common cause of people ending up on the streets. There’s a multitude of reasons, she explains. Some come from broken homes or get abused as children, leading to mental issues as adults. Some lose their jobs and homes and get caught up in a downward spiral of alcohol and drugs. Others come out of prison and have no place to go.

It’s very challenging work, Zuzana tells me, dealing with people who are living in extreme poverty, may be suffering from mental issues, and are often very sick or in poor physical condition. It’s important to have supportive colleagues around you. You also need a sense of humour in this line of work, and despite the circumstances, they manage to have a laugh every day.

I admit that I was expecting it to be a lot more depressing, and congratulate Zuzana on what she’s done with the place.

“That’s the best part of the job, using my creativity with limited resources to make the best of what we have,” she said, with an understandable note of pride.

Zuzana has been the coordinator of the homeless centre for four years. She is calm, friendly and a very compassionate person, but she has also introduced a strict set of rules. Sometimes clients can get a bit aggressive, and she insists on politeness to her and her colleagues. Clients must treat the centre’s staff with the same respect as the staff treats them. Again, it’s part of recovering some dignity and responsibility for their behaviour.

She started out volunteering in the UK. It gave her some good experience, and also provided her with a vision for what she later wanted to achieve in the centre on Bratislavská. Even 30 years after the Velvet Revolution, support for the homeless is in its relative infancy compared to the UK. Under Communism, homelessness didn’t officially exist, and sleeping rough could land you in jail.

After the Revolution, the hidden homeless of Czechoslovakia suddenly became visible. Zuzana helped out on the streets of Bratislava, where assistance amounted to a bowl of soup because there was no professional support set up yet.

She established the newspaper Nota Bene, a little like the Big Issue in the UK. Homeless people would sell the paper and received the money for their efforts. Later she published two children’s books under the Nota Bene label to help people understand homelessness, and again the homeless people selling the books received the proceeds.

Zuzana enjoys working at the centre, and while she could always do with more funding, the limited resources give her freedom to express her creativity.

She showed me the rest of the facilities. On the first floor are the rooms where the social workers sit with clients. They’re popular with visitors because they are very good at befriending people and establishing trust, which in turn helps them help the client. I briefly met Petr Matejec, also known as “Botanic Man” at the centre. When he opened his office door I found out why – his office looks more like a botanical garden, with plants all over the place.

He’s the main coordinator of Rescue Web, which helps the most extremely disadvantaged homeless people. They’re often people too ill or distrustful to make it into the centre and are the most likely to die on the street. Petr goes out to them, earns their trust, then brings them into the centre. Once they’ve had a bath and got some clean clothes, he’ll often sit with them in his office and invite them to help tend his plants. It’s a relaxing pastime and helps form a bond with the client.

Zuzana tells me that their social workers also double as street workers, going out to visit people around the city. They focus on people in isolated locations, who often struggle socially and are afraid to come into the shelter. They can also offer a variety of assistance, including help with getting medical attention, and some degree of preventative support for at-risk people in danger of losing their homes due to lack of work, funds, debt, or a variety of other contributory factors.

On the second floor is the Night Shelter. This is only available for a sleepover and costs a nominal fee of 30kc. For this price the client gets a shower, a locker for their stuff and a clean bed for the night. The beds are separated into male and female dorms. There are single beds in the women’s room, and bunks in the men’s. That’s because 80% of the visitors to the shelter are men. It’s extremely dangerous for women on the streets, and they tend to be better at improving their situation than the men.

Across the hall from the night, shelter is part of the Asylum House scheme. This is available throughout the year, up to 18 months at a time, primarily aimed at people finding themselves in a crisis and are looking to get themselves quickly on their feet again. Clients share a room with one other person, and it’s a stable place to live while they get things sorted out.

My visit concludes with the starkest reminder of just how desperate some people’s situations are: the Crisis Centre. It’s a room that is only made available during the coldest months. There are no beds or shower facilities. It’s purely a firefighting operation to stop people freezing to death on the streets. Up to thirty people will sleep on the floor, often the worse for wear from drugs or alcohol. It’s not ideal, but it’s a means to an end with the current resources.

During the rest of the year, the Crisis Centre room is used for sorting clothes. People generally send appropriate stuff, but there’s also a bit of education involved – while grateful, the centre tries to discourage people from sending anything useless. Sorting it all out adds to their workload, and they’re usually stretched at the best of times.

I left feeling far more positive than when I arrived. I was looking forward to returning to the centre for Mikuláš with clothes, cakes and gifts from my colleagues at MADFINGER Games. While no-one at the centre seems to be under any illusions about the situation facing Brno’s homeless, the sense of focus and commitment I got from everyone I met was reassuring. It’s good to know that no matter how far you might fall, there are people like Zuzana and her colleagues ready to catch you. They deserve all the support we can give.

Charita Česká Republika is one of the oldest charities in the country. They are currently looking for volunteers to help sort bags of donated clothes during their busiest time of year. Help is generally appreciated all year round.

Zuzana’s clients are particularly in need of the following items:

Also, old camping gear is very useful for people sleeping out in the cold, often on hard surfaces. Camping mats, sleeping bags, and even tents offer some degree of shelter and comfort. If you can donate such items, older and functional is key – unfortunately, new-looking items are more likely to get stolen.

You can find out more about the charity here.

https://www.brnodaily.com/2019/12/05/news/food-warmth-and-kindness-how-a-brno-homeless-shelter-helps-people-recover-their-dignity-and-saves-lives/https://www.brnodaily.com/wp-content/uploads/2019/12/charity-1-KK-BD.jpghttps://www.brnodaily.com/wp-content/uploads/2019/12/charity-1-KK-BD-150x112.jpg2019-12-06T08:09:20+01:00Lee AdamsCzech RepublicBrno,Charity,Czech Republic,Things To Do in BrnoPhotos: Homeless shelter of Charita Česká republika at Bratislavská 58. Credit: KK / Brno Daily. It was the last warm day of the year when I went to the homeless shelter on Bratislavská. I was there to meet the coordinator, Zuzana Csontosová, and find out more about what the...Lee AdamsLee Adamsleerobertadams@hotmail.co.ukAuthorA writer, film critic and father of two who has called Brno home for ten years.Brno Daily

Brno, Charity, Czech Republic, Things To Do in Brno 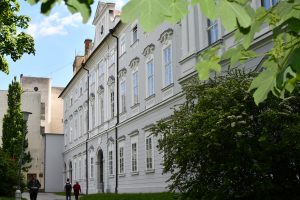 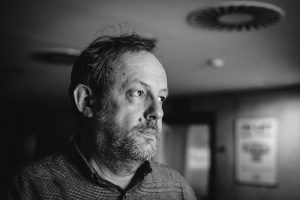 A writer, film critic and father of two who has called Brno home for ten years.
View all posts by Lee Adams →
« Janacek Festival Will Bring International Stars to Brno in Fall 2020
Looking for the Perfect Present? Brno Daily Writers Offer Some Ideas »