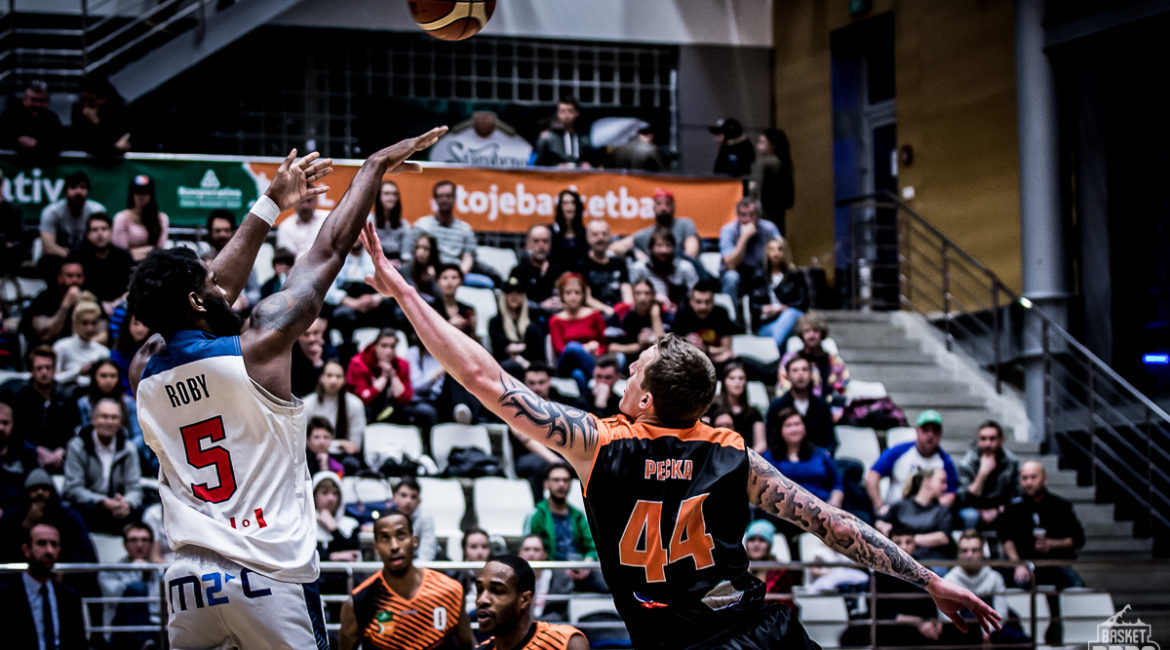 Brno, Dec 11 (BD) — Šelmy Brno face two tough opponents who want to knock them from the top spot; KP Brno has a head of steam going; Kometa lost the first two games of its five consecutive road games; and the Brno sports results and schedule.

mmcité1 Hopes that Home Cooking Will Lead to Wins

After a break, mmcité1 Basket Brno started the second half of the Kooperative NBL season with the same disappointing results of every game of the first half. Brno lost at Sluneta Ústí nad Labem on Sunday, 88-79, to drop to 0-12 in the Kooperative NBL.

Jakub Krakovič, a two-meter-tall post player, has come in to provide some leadership and an emotional foundation to help spark the team. He had nine points and eight rebounds in Ústí nad Labem. Krakovič played for Brno several seasons ago, but found success at Děčín, where he was the captain.

Davell Roby, an American who played for Brno last season, is also back with the team. He and Radek Farský both had a team-high 19 points on Saturday.

The remaining 10 rounds of the first part of the regular season will have another game against every team in the league. The top teams will earn a berth in Group A1, like Brno did last year, and then the postseason. The teams who are lower in the standings will play each other in Group A2, where they risk relegation to a lower league.

Top Moravian Teams Next for Šelmy

The VK Brno Šelmy maintained their perch atop the Uniqua Extraliga Ženy when they beat Liberec in straight sets on Saturday.

Now the team will travel to third-place Prostějov on Saturday for a 5 p.m. match. Then, on Dec. 21, VK Brno will host second-place Olomouc at 6:30 p.m. in the final match before the new year.

Brno leads the league with 38 points. Olomouc is one point back. Prostějov and Ostrava are tied with 27.

Královo Pole, which is in seventh place with 15 points, went to five sets in Ostrava before succumbing to the fourth-place team on Saturday. They will host Frýdek-Místek tomorrow at 6 p.m.

On the men’s side, Brno is tied with Liberec and Praha for third place with 18 points. In fact, Brno beat Praha in five sets on Saturday to move up into the tie.

Brno travels to Příbram on Monday for a 7:20 p.m. game that will be televised on CT Sport.

KP Brno has picked up so much momentum that it is best to just get out of their way.

The Královo Pole team, which is second in the Renomia ZBL with a 9-2 record, has won eight games in a row, including three EuroCup games and an 81-72 victory over Sokol Hradec Kalove on Saturday. BLK Slavia Praha is next in line this Saturday in Prague at 5 p.m.

Against Hradec Kralove, Gabrielle Green hit a 3-pointer to create an insurmountable nine-point difference with 56 seconds left. She was one of five players who scored in double-digits for the well-balanced offense.

In international play, KP Brno beat Botas (Turkey) in Ankara on Nov. 28 and defeated Elitzur Neve David Ramla of Israel at home on Dec. 4 on national television. All three of the teams in Group A finished with 3-3 records. KP Brno had a poor point differential and did not advance.

Žabiny Brno (5-6) hosts SBŠ Ostrava on Saturday at 5 p.m. in the domestic league and then plays the same team again in a CEWL game on Sunday at noon.

Žabiny Brno lost at ZVVZ USK Praha (11-0), 108-76, last Saturday. They will resume play in the new year earlier than most of the rest of the league when they travel to DSK Levhartice Chomutov on Jan. 3. Žabiny will then host Loko Trutnov on Jan. 18 at 5 p.m.

HC Kometa has struggled with its defense and, even after bringing in a new defensive player, the team gave up 10 goals in two road games this week.

The team now gets a short break before three more road games. They finally get a home game on Dec. 26 when they host HC Sparta Praha on live television.

Jack Glover, a 23-year-old native of Minnesota, got playing time in the past two games, but he was not able to turn the tide, as Kometa lost 4-2 at HC Škoda Plzeň on Friday and 6-2 at HC Dynamo Pardubice 6 on Sunday.

The team, which has given up 79 goals in 26 games, will no doubt continue working on its defense during this next week.

Kometa is in seventh place after 26 of the 52 games of the 2019-20 season. They have 41 points, well behind league-leader Sparta (53 points), but still squarely in playoff contention.

The team goes to HC Oceláři Třinec on Monday, HC Verva Litvínov next Wednesday and BK Mladá Boleslav on Dec. 22.