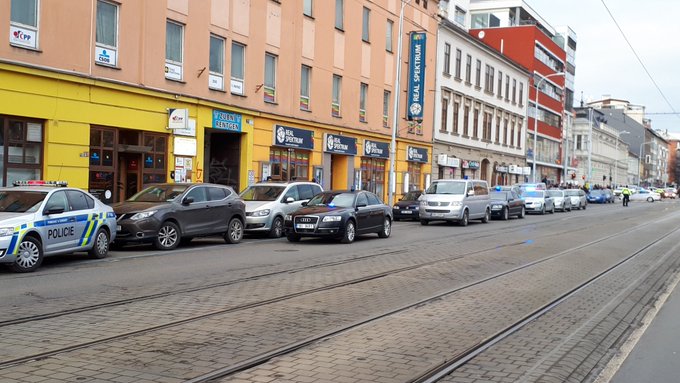 On Friday afternoon, just a few days before Christmas, Czech Police reported a man with a gun in the area of Lidická in Brno. The street was closed to cars and public transport for over two hours, with a police helicopter flying over the city centre. Police had not found the potentially dangerous man by the afternoon, but in a twist in the chain of events, announced the arrest of a 31-year-old suspect at 6pm, over two hours after the street had reopened. Photo: Police ČR.

Brno, Dec 21 (BD) – Shortly before 2pm, the street of Lidicka closed to cars and public transport. Police reported a man with a gun in the area and issued a warning via media advising the public to avoid the street and its surroundings.

Witnesses reported a single gunshot in the area in the early afternoon. Around 3pm, a Police task force intervened in one of the orange buildings near Pionýrská tram stop. Later, police announced that there was nobody armed in the building and that the gunshot was most likely not directed at anybody.

At 3:18pm, public transport was back in operation, according to Brno Transport Company (DPMB); car drivers had to wait a little longer.

Jan Seitl, Transport Manager of DPMB, said that the police operation had stopped some 25 trams in the area and had a large impact on transport across the whole city.

In the afternoon, the director of Brno Police Martin Kotlan said: “We don’t know if it was a real gun, gas-powered gun, or a toy. It’s not even yet possible to exclude the chance that it was a prank.” According to Kotlan, police were looking for at least two people.

Around 6pm however, events took a twist when police detained a man with a gas gun and ammunition on Lidická, and took him in for questioning. “Shortly after 6pm we arrested a 31-year-old man near the crime scene. He was carrying a gas gun with ammunition. Investigators are continuing to work on the case,” said South Moravian Police Department spokesman Bohumil Malášek.

https://www.brnodaily.com/2019/12/21/news/man-armed-with-gas-gun-detained-on-lidicka-yesterday-evening/https://www.brnodaily.com/wp-content/uploads/2019/12/lidicka-6.jpghttps://www.brnodaily.com/wp-content/uploads/2019/12/lidicka-6-150x84.jpg2019-12-21T09:17:48+01:00BD StaffCrimeCzech Republic / WorldBrno,Crime,NewsOn Friday afternoon, just a few days before Christmas, Czech Police reported a man with a gun in the area of Lidická in Brno. The street was closed to cars and public transport for over two hours, with a police helicopter flying over the city centre. Police had not...BD StaffBD Staff team@brnodaily.czAdministratorBrno Daily - English News and Events in Brno.Brno Daily

Brno Daily - English News and Events in Brno.
View all posts by BD Staff →
« Report: A Man with a Gun in the Area of Lidická Street
Br(u)no: Fireworks »