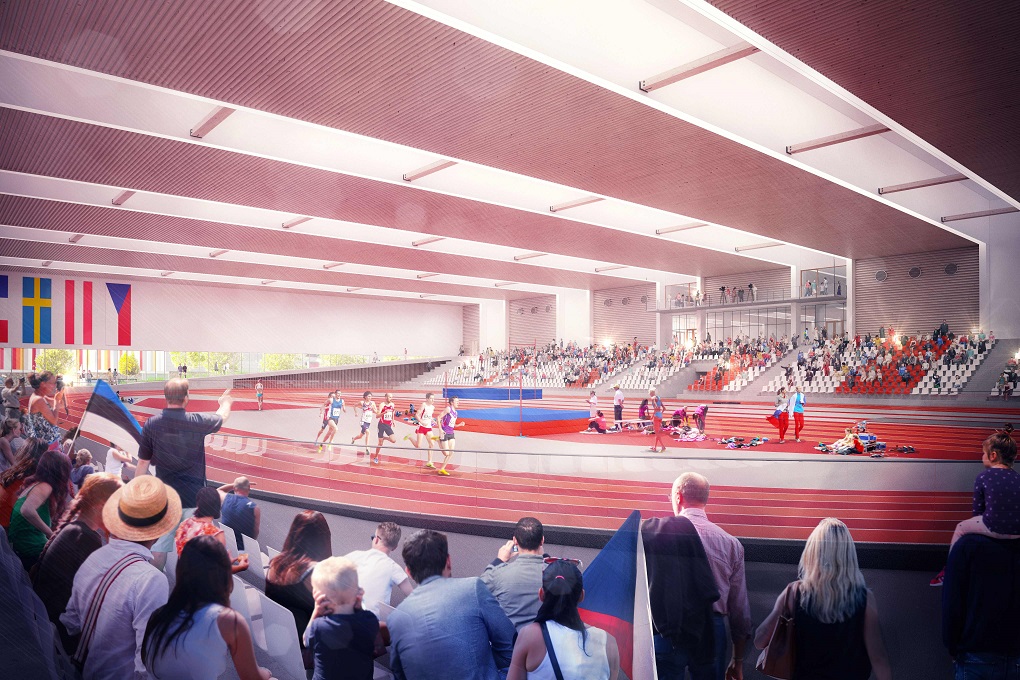 Construction of the new sports hall was scheduled to begin last month, but was pushed back five months. Now a gap in funding has raised the possibility that the project may be cancelled altogether. Visualisation of the new hall. Credit: MMB.

Brno, Feb 11 (BD) – The project to build a new 2,200-capacity indoor sports arena in Bohunice has been something of a political football, with the new City administration that took over in 2018 changing the tender to include a car park. Work which was due to begin in January 2020 has been delayed until May. (Read more in our previous article: “New Athletics Hall at Kampus Bohunice to have three times more parking spaces”.)

However, the project now faces its biggest challenge, as a funding shortfall threatens the viability of the project altogether. The cost of the project has risen to CZK 800 million, with the region covering CZK 100 million and the City of Brno to pay the rest. However, representatives from the City Council are of the view that this will not be possible, and have said that without a clear guarantee from the Czech Government of extra subsidies, the project will only progress as far as the end of the planning stage, and nothing will be built.

According to Robert Kerndl (ODS), Council Member for Investment, quoted by Czech news website iDnes: “The City is the main investor, and the costs have doubled from the original CZK 400 million. We have CZK 100 million promised from the region, so Brno would have to deliver the rest, which is unrealistic. It will not work without state support. We support the project, but I cannot imagine the City of Brno paying for the hall on our own.”

The Czech Government has promised to provide some money for the construction, but has not said how much or when. Since the beginning of January, the government’s sports investment has been the responsibility of the National Sports Agency (NAS), which is still being set up and is not able to decide about any subsidies. iDnes quoted vice chairman of NAS, Ivo Lukš, as saying there is a chance the project will be included in the National Investment Plan, but that the new agency’s investment programs are only in preparation and therefore “how much the state will contribute, if it does, cannot currently be said.” The agency’s first decisions are unlikely to be made until the second half of this year.

However, the City of Brno has little time to wait, as a final decision on the beginning of construction must come in June this year, within two months of the contractors submitting the building permit to the city in April. This has sparked a war of words between the different stakeholders in the project. Quoted in iDnes, Deputy Mayor Petr Hladík, Council Member for Sport, defended the City’s position: “Who would build a house for eight million if they only have one million? We’ll have everything ready, tell the companies not to build, and wait for the verdict. Once that comes, we will be able to continue with construction again. It is an unnecessary delay, but it falls squarely on the Prime Minister, and on the National Sports Agency.”

However, others accused the City of a lack of courage. Libor Varhaník, chair of the Czech Athletics Association, stressed the national importance of the facility and urged the City to be bolder: “They have the money to start this year. The biggest funding package will only be needed in 2021, when the NAS will have its own money and will certainly release it for a building that will already be in operation and is of strategic importance.” Former Mayor of Brno Petr Vokřál (ANO) agreed, criticising the council for a lack of effort and adding that “the city should start construction, because sooner or later the NAS will set out a program for the regions.”

The proposed three-storey sports arena will include a 200-metre running circuit, eight sprinting tracks, and a field events area, for use by professional athletes in Brno as well as military training and students from Masaryk University. However, until the NAS is fully functioning to be able to allocate subsidies, or there is a change in policy by the City of Brno, funding for the proposed sports arena appears to be in doubt, leaving an uncertain wait for Brno’s athletes.

https://www.brnodaily.com/2020/02/11/news/politics/new-indoor-sports-arena-in-bohunice-under-threat-due-to-funding-shortfall/https://www.brnodaily.com/wp-content/uploads/2019/11/Atleticka-hala-camera.jpghttps://www.brnodaily.com/wp-content/uploads/2019/11/Atleticka-hala-camera-150x100.jpg2020-02-11T07:43:51+01:00Jack StephensCzech Republic / WorldPoliticsBrno,Politics,SportConstruction of the new sports hall was scheduled to begin last month, but was pushed back five months. Now a gap in funding has raised the possibility that the project may be cancelled altogether. Visualisation of the new hall. Credit: MMB.Brno, Feb 11 (BD) - The project to build...Jack Stephens jack.stephens50@gmail.comAuthorA writer and English teacher originally from London who has lived in Brno since 2011, interested in politics, low culture, and all things strange and/or Czech.Brno Daily

A writer and English teacher originally from London who has lived in Brno since 2011, interested in politics, low culture, and all things strange and/or Czech.
View all posts by Jack Stephens →
« Second Tender Process For Brno-Munich Air Route Ends With No Response From Carriers
Czech Press Photo 2019 Exhibition Is Coming To Brno »