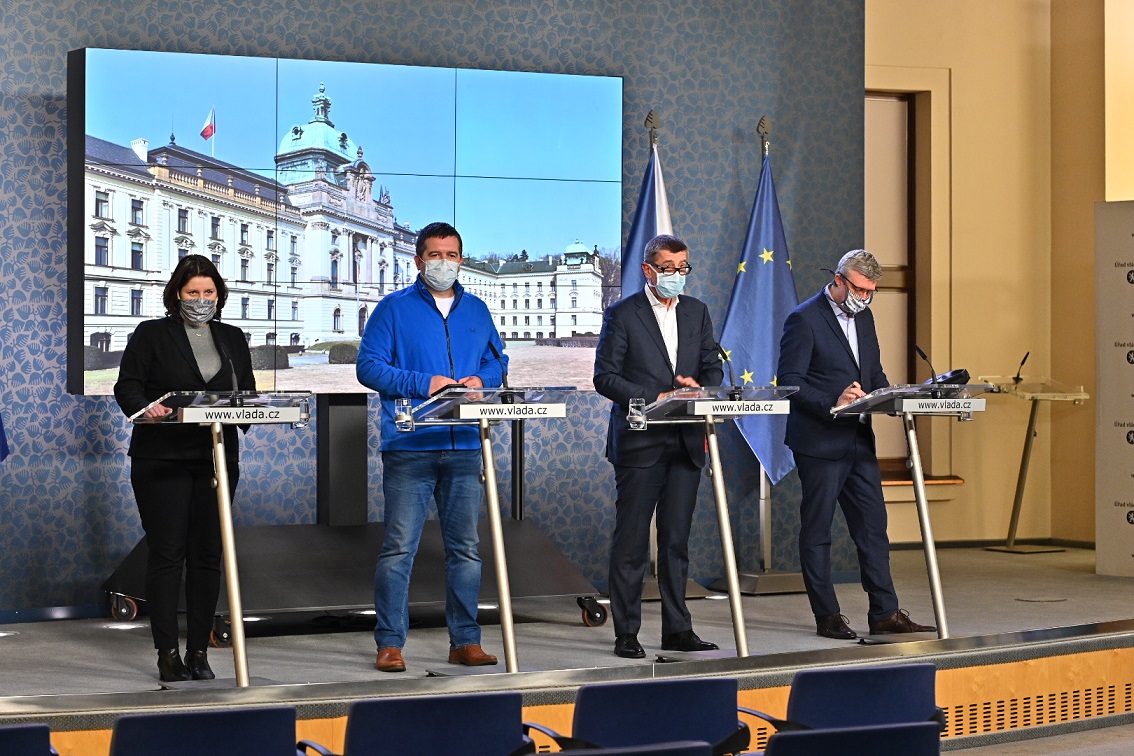 Shortly after the ruling, the government announced an end to the restrictions on free movement, opened the borders, and moved forward the timetable for businesses to reopen. The government is accused of not following the correct legal procedures during their crisis response, in order to avoid paying compensation to businesses affected financially by the lockdown. Title photo: Government press briefing, March 2020. Photo credit: Vlada.cz.

Brno / Czech Rep., Apr 24 (BD) – Until yesterday, the Czech government appeared to be having a good crisis; new cases and deaths were continuing to fall, the emergency measures had clear support from the public, and the schedule for exiting the lockdown was gradual enough to provide flexibility, in response to data from widespread testing.

However, just 24 hours later the situation looks rather different. Yesterday, a complaint filed by healthcare lawyer Ondřej Dostál, claiming that the government had not followed the correct legal procedures when bringing in new emergency measures against the spread of coronavirus, was upheld by a municipal court in Prague. In doing so, the court annulled four specific measures related to the restriction of freedom of movement and the closure of shops and services. Although the complaint was technical in nature, it could have far-reaching consequences for companies and individuals economically affected by the lockdown, and has already prompted a number of surprise announcements from the government.

Specifically, the complaint related to the authority of various bodies to impose emergency measures, and the legal basis for doing so. When the government imposed the state of emergency and restrictions to free movement on March 16th, amid rapidly escalating numbers of confirmed cases of Covid-19, they did so as an Act of Government, based on the Crisis Management Act, which regulates the state response to major crises. However, from that point on, new emergency regulations were issued by the Ministry of Health, using the Public Health Protection Act. According to Dostál, this was an illegal overreach of the ministry’s authority, which he described as “arbitrary, chaotic, and incomprehensible.”

Judge Štěpán Výborný agreed, stating that decisions relating to the state of emergency are too serious to be the decision of one ministry alone, and must be taken by the whole government. He thus annulled four emergency measures: two related to freedom of movement and two related to the retail sector. Výborný stressed that the ruling did not mean that the measures were not effective, just that they were issued by the wrong authority: “The court does not intend to dispute that the procedures applied appear to be effective in managing the threat. However, effectiveness is not a measure of legality, and the purpose does not justify the means.” The judge further stressed that the court respected the government’s decision to impose a state of emergency and protect the public during a pandemic, and accordingly gave the government until Monday, April 27th, to redraft the laws according to the correct procedures before the annulments come into force.

In response, Health Minister Adam Vojtěch announced that the government would be filing a complaint against the ruling, “because it should be examined by the Supreme Administrative Court in order to clarify what the real competence of the Ministry of Health is,” adding that he welcomed the judge’s view that the measures had been effective. At a press briefing, Vojtěch said he would not resign, describing calls for him to do so as a “tax on success”: “I do not intend to resign as a result of the fact that I issued measures to prevent the largest spread of the pandemic in the 100-year history of the Czech Republic. Even the city court itself stated that we responded correctly, and that there was no problem within the scope of the measures, and I remind you that there was no paved road to follow.”

The accompanying text of the ruling made clear that the judge only examined the correctness of the procedure, and not the government’s reasons for acting in this way. However, many observers swiftly noted that declaring the measures on the basis of the Crisis Management Act would have left the government on the hook for compensation for any business financially affected, potentially totalling up to CZK 1 trillion, whereas this was not the case for decisions taken according to the Public Health Protection Act. According to Dostál, the ruling means that business owners are now entitled to claim compensation from the government for loss of revenue, and in some cases loss of livelihoods.

However, lawyers warned that success was far from guaranteed in any legal claims against the government. Although the Crisis Management Act states that all businesses damaged by emergency state intervention are eligible for compensation, without exception, the law was designed for situations such as floods, rather than emergencies affecting the whole country. For this reason, lawyer Jan Vycha told Seznam News, the courts may dismiss any such lawsuit, on the grounds that the pandemic is an exceptional situation, and the state would be bankrupted if it had to compensate everyone. Nonetheless, it is expected that some business owners will file claims with the Finance Ministry, which will then have six months to decide whether to pay or fight the case in court.

If the idea that the government’s response to the crisis was illegally carried out to avoid properly compensating businesses wasn’t serious enough, the government’s next announcements added an extra level of chaos and confusion. Rather than moves to redraft the existing laws before Monday’s deadline, there followed a series of swift announcements that surprised reporters: the country’s borders, which President Zeman suggested only last week might remain closed for a year, would in fact open the next day (with certain restrictions); the government’s five-step timetable for the reopening of Czech shops and services would be condensed into four steps (including the first step that came into force on Monday), concluding on May 25th rather than June 8th; and restrictions of freedom of movement would end immediately, with maximum permitted groups of ten rather than two. (For more details on the new announcements, see our main article: “Government announces new faster schedule for reopening”)

The ministers announcing the loosening of the measures claimed that the steps were underpinned by the ever-improving epidemiological situation in the Czech Republic: “Easter turned out very well, so we can afford to relax the restrictions faster. We can’t miss a single day when it comes to relaxing measures for businesses,” said Trade Minister Karel Havlíček. However, this sharp change in policy calls into question the purpose of the large-scale testing launched only yesterday in Prague, Brno, and other cities, which was previously claimed by ministers to be vital in future government decision-making, and is considered by most epidemiologists to be a critical element of any successful quarantine exit strategy.

Among those responding critically to the government’s announcements was Danuše Nerudová, economist and rector of Mendel University, who questioned the evidence behind the government’s decisions: “Hairdressers could not go to their clients’ houses on Monday, but as of tomorrow, up to 10 people can congregate. As a scientist, I have to ask: can we see the underlying analysis on the basis of which these decisions are being made?” She later added that: “Evidence-based policy is close to zero in our country. Other countries west of us provide data to scientists and are happy to work together. This leaves us still in Eastern Europe.”

While the rather sudden easing of restrictions will be welcomed by many people struggling with the impact of quarantine and desperate to go outside again, the combination of quarantine measures being first declared illegal, and then suddenly removed, leaves an impression of a government acting ad hoc, rather than on the basis of evidence, reacting rather than planning, and making decisions based on convenience and political considerations, rather than in the best interests of the country. The Czech public will no doubt follow the new instructions, putting trust in the government as they have throughout the crisis, but if the virus returns in a second wave, serious questions will be asked of the government’s strategy.

https://www.brnodaily.com/2020/04/24/news/politics/opinion-governments-crisis-response-in-disarray-as-court-strikes-down-four-emergency-measures-on-procedural-grounds/https://www.brnodaily.com/wp-content/uploads/2020/03/goverment-meeting-march-19-credit-vlada.cz_-1024x683.jpghttps://www.brnodaily.com/wp-content/uploads/2020/03/goverment-meeting-march-19-credit-vlada.cz_-150x100.jpg2020-04-24T17:20:20+02:00Jack StephensCzech Republic / WorldOpinionPoliticsCoronavirus,Czech Republic,Opinion,PoliticsShortly after the ruling, the government announced an end to the restrictions on free movement, opened the borders, and moved forward the timetable for businesses to reopen. The government is accused of not following the correct legal procedures during their crisis response, in order to avoid paying compensation to...Jack Stephens jack.stephens50@gmail.comAuthorA writer and English teacher originally from London who has lived in Brno since 2011, interested in politics, low culture, and all things strange and/or Czech.Brno Daily

A writer and English teacher originally from London who has lived in Brno since 2011, interested in politics, low culture, and all things strange and/or Czech.
View all posts by Jack Stephens →
« Government Announces New Faster Schedule For Reopening; Most Shops To Open From Monday
Br(u)no: Some Perspective. Quarantine Week 6 »